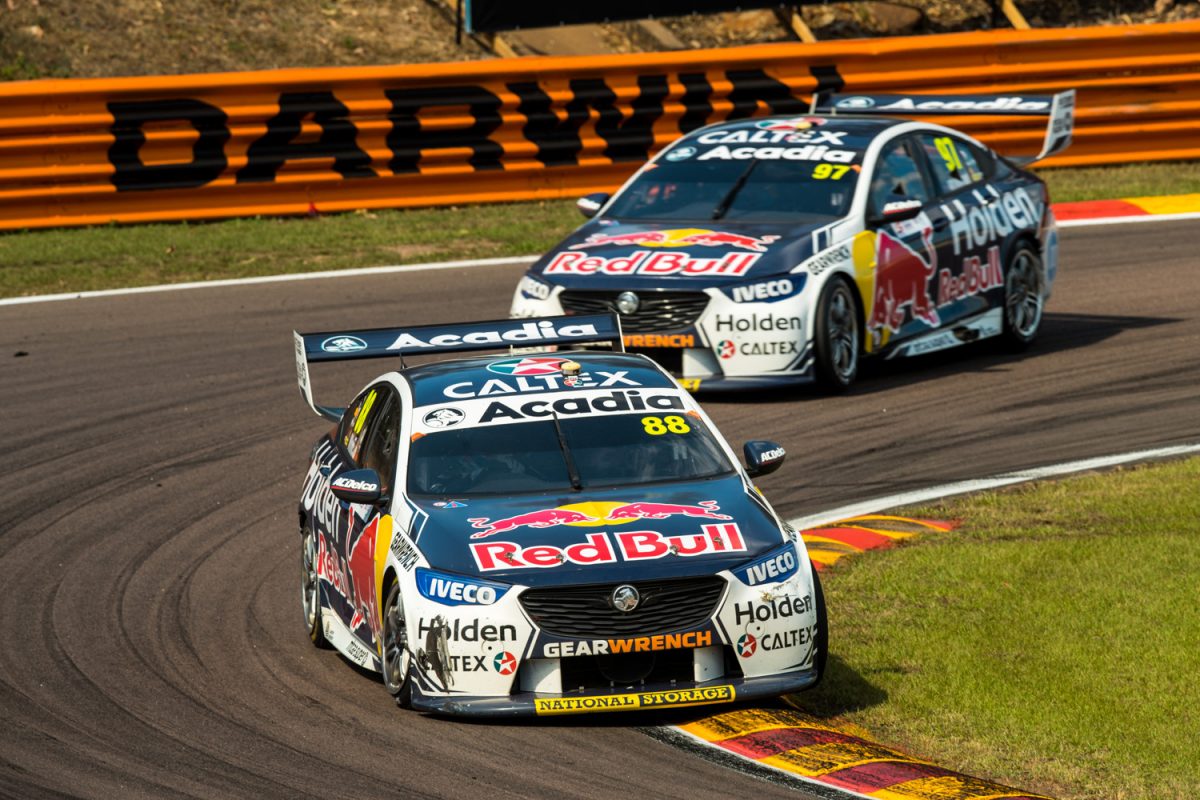 A high rate of development designed to close the gap to the pace-setters has made it harder for Triple Eight drivers to extract the best from the Red Bull Holdens in qualifying.

The Holden squad has been forced to up its rate of development this season as it aims to match the benchmark Shell V-Power Racing and keep ahead of the rapidly improving Penrite Racing.

Such has been the flow of upgrades,  Jamie Whincup and Shane van Gisbergen have had new componentry fitted to their cars at each of the last three rounds.

While the developments have improved the cars in race trim, it has affected their ability to extract one lap pace from the cars as the drivers try to understand what is beneath them.

At Darwin, neither Whincup nor Van Gisbergen made Sunday’s Armor All Top 10 Shootout, a rare feat for the former champion team with the pair 11th and 16th respectively.

Triple Eight’s best qualifying result was an eighth for Whincup prior to Race 15.

“The cars were a bit too sensitive which meant that the window for us to nail quali is just a little bit too fine right now,” team manager Mark Dutton told Speedcafe.com.

“You can’t have the car that has to be right on the razor’s edge to extract the best qualifying laps.

“So, we still should have qualified better, clearly even with the cars we had, but we didn’t, so we need to work on that.

“This is the third round in a row that we’ve turned up with new componentry as well, so we’re pushing really hard on the development side.

“The difficulty with that, on the flip side, is the drivers are constantly getting different cars to drive, so it’s very hard for them to extract 100 percent when we’re not doing small changes every time they get in the car.

Dutton believes the team’s decision to run an aggressive program of developing the car on the run is not just the result of Shell V-Power Racing’s dominance.

“We saw (David) Reynolds in qualifying before the shootout, he posted a fastest lap, got out of the car, then Scotty (McLaughlin) went again to beat it.

“He posted a very fast lap time then the track improved, so who’s to say he wouldn’t be on provisional pole if he had have done another lap?

“But that was a strategic choice for them, so that’s their choice, that’s smart, knowing that they’re in the (top) 10 with that lap, but it also shows just the pace that Erebus have.

“It’s people like Erebus as much as anyone (that are) forcing us to develop and push really hard.”

However, the team is confident that the developments are improving their package, evidenced by Whincup’s impressive pace to recover to fifth after dropping to 24th on the opening lap of Race 16.

“For sure, particularly in race pace (the developments have improved the car),” said Dutton.

“It was another decent step up (on Sunday), more than we expected, which is always pleasing, but we’re still not nailing the consistency for qualifying.

“As a team we’re working to improve the qualifying cars, while not throwing away excellent race cars.”

Triple Eight will regroup before heading to the Watpac Townsville 400 from July 5-7.