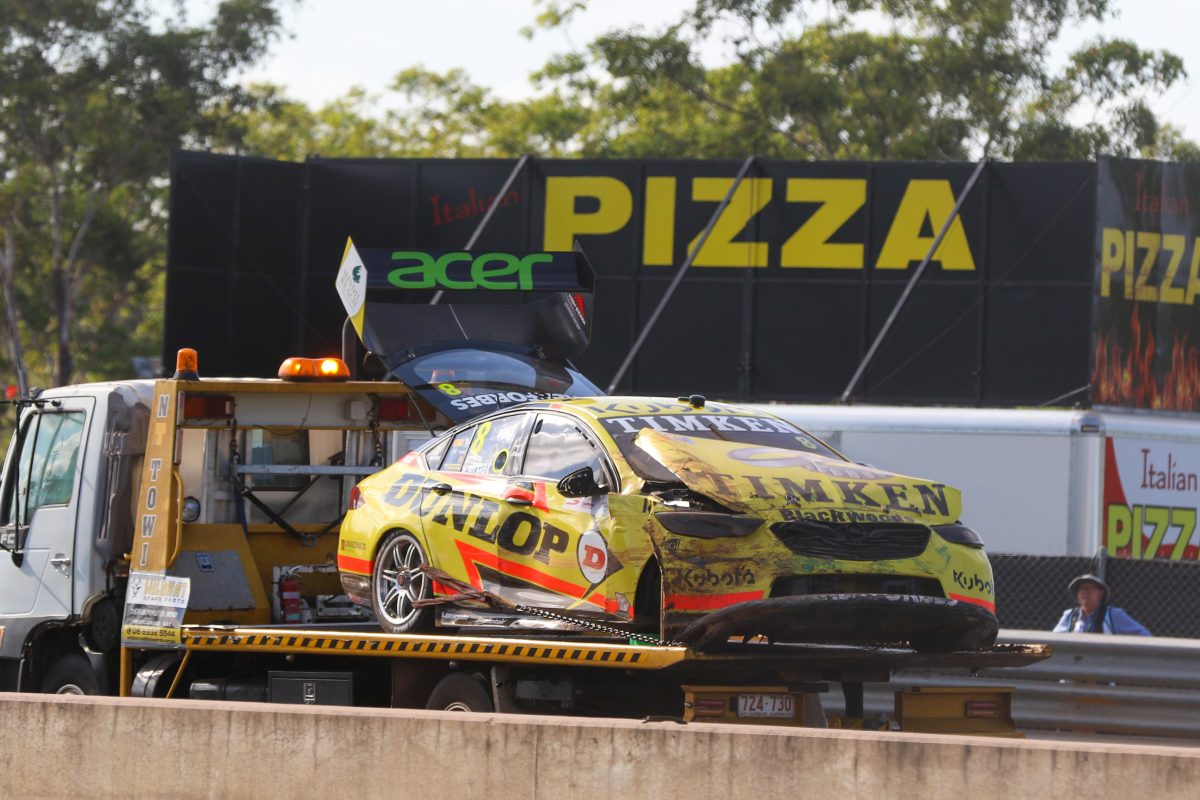 Brad Jones has hailed the ‘sensational job’ carried out by his team to repair damaged cars during a bruising BetEasy Darwin Triple Crown for Brad Jones Racing.

The Albury outfit endured a tough trip to the Top End that saw three of its four cars incur damage from incidents across the weekend at Hidden Valley Raceway.

Crew members were pitched in a race against time to fix its #8 and #21 Holdens after Nick Percat and Macauley Jones found the barriers at speed in separate incidents during Sunday’s Armor All Qualifying.

Amazingly the team managed to repair extensive damage to the front of Percat’s car and to the rear of Jones’ entry with minutes to spare before the afternoon’s 200km heat.

The repairs came after Jones was involved in an opening lap tangle at Turn 1 with Boost Mobile Racing’s James Golding and Tekno Autosports’ Jack Le Brocq that required a patch-up on the #21 ZB Commodore during Race 15.

Meanwhile, Tim Slade also sustained damage to the front of his #14 car after being taken out of Race 15 by Kelly Racing’s Rick Kelly on Lap 2.

Team owner Brad Jones praised his team for rising to the occasion when the squad’s backs were to the wall.

“I think the guys did an amazing job on Saturday and Sunday, really,” Jones told Speedcafe.com.

“I mean, think about the damage the 21 car had Saturday, and you know, the 14 car had and then Sunday with the 8 and the 21 car. I don’t want to say it was typical, but it was a sensational job by all the crew at BJR.

“When the race cars were in parc fermé conditions, the wildcard crew (from Jack Smith’s car) came down to help the 8 and the 21 crew and the 14 crew came over and that’s really the cornerstone of the camaraderie that we have at BJR and the work ethic and the guys always rise to the occasion.

“I mean, whenever we’re in this situation with our backs to the wall, I find that I feel with my team just rise to the occasion.”

Aside of the incidents, BJR unusually struggled for outright pace at Hidden Valley Raceway with Percat’s 13th and 15th the best results from the four cars.

“We struggled here, which was a bit disappointing really because normally this a place (where) we’re very strong but I felt like we just couldn’t click, and we had a lot of interruptions with things, accidents and things going wrong.

“I also felt that Nick’s drive on Sunday was pretty good from last and he had a bit of on-track drama as well in that, but his pace, that last stint of his was pretty solid.

“Everyone has a tough weekend and this proved to be a tough one for us.”

The team will now assess the #8 and #21 cars back at the workshop to see if further repairs are required before the championship continues.

Brad Jones Racing sits sixth in the teams’ standings ahead of the next round at the Watpac Townsville 400 from July 5-7.