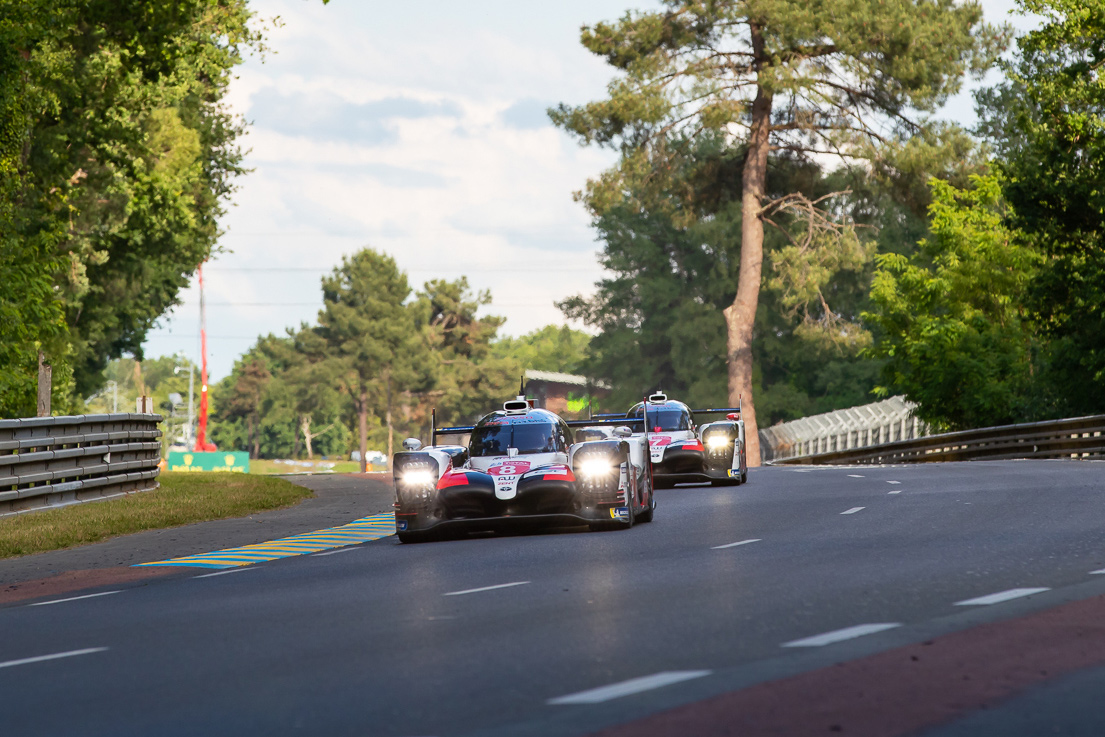 Toyota remains well in control of the 24 Hours of Le Mans after eight hours in an opening segment highlighted by fierce battles in GTE-Pro and LMP2.

Since the drop of the French flag, the Cologne-based, Japanese manufacturer team has dominated the twice-around-the-clock race with the pole-sitting #7 Toyota TS050 Hybrid leading the most laps of the two so far.

A series of mistakes from José María López in the #7 Toyota allowed the sister #8 Toyota of Kazuki Nakajima to take over the lead and maintain a two-second cushion at the end of Hour 8.

The best of the non-hybrids is SMP Racing’s #17 machine, more than a lap behind the Toyotas who have enjoyed a largely faultless run so far.

LMP2 is led by the #36 Signatech Alpine in eighth outright.

GTE-Pro is headed by Porsche’s #92 911 RSR in 27th outright with a narrow margin over the rest of the pack amidst a ferocious battle in the class.

Keating Motorsports’ #85 Ford GT in 43rd outright is on top in GTE-Am by 45 seconds over the next best car in class.

The first five hours of the race ran without any major incidents aside from the odd Full Course Yellow for debris.

Mike Conway’s blinding first stint in the #7 Toyota saw him streak away, while G-Drive Racing and Signatech Alpine duked it out for the LMP2 lead.

A brief Safety Car period early in the fifth hour closed up the gaps in the GTE-Pro field and the nose-to-tail, door-to-door racing resumed after a thundering opening few hours.

Following spells at the front for Aston Martin, Corvette Racing and Porsche, Daniel Serra clawed his #51 AF Corse Ferrari 488 GTE to the head of the class with a move on the #92 Porsche, however, the latter got back in front in the pits.

Marcel Fässler triggered the second Safety Car intervention shortly after when the Swiss driver suffered a heavy crash aboard the #64 Corvette.

Contact with the #88 GTE-Am Dempsey-Proton Porsche while navigating traffic in the Porsche Curves speared the C7.R into the barrier, ending its race on the spot.

Rain then began spitting, making track conditions slippery, with third-place outright, Thomas Laurent, getting caught out in the #3 Rebellion Racing non-hybrid LMP1 and hitting the fence.

Laurent was able to get the Rebellion back to the pits as the team checked over the car, replaced the nose and surprisingly sent him on his way again in less than four minutes to rejoin fifth overall.

The three Safety Cars in quick succession compressed the leading Toyota’s 35-second advantage and signaled a change of lead outright, with the #8 Toyota vaulting ahead of the #7.

For some time the duo was separated by a couple of seconds, swapping positions a handful of times as López leapfrogged Nakajima in the pits before López fired off the road at Mulsanne corner and lost the position.