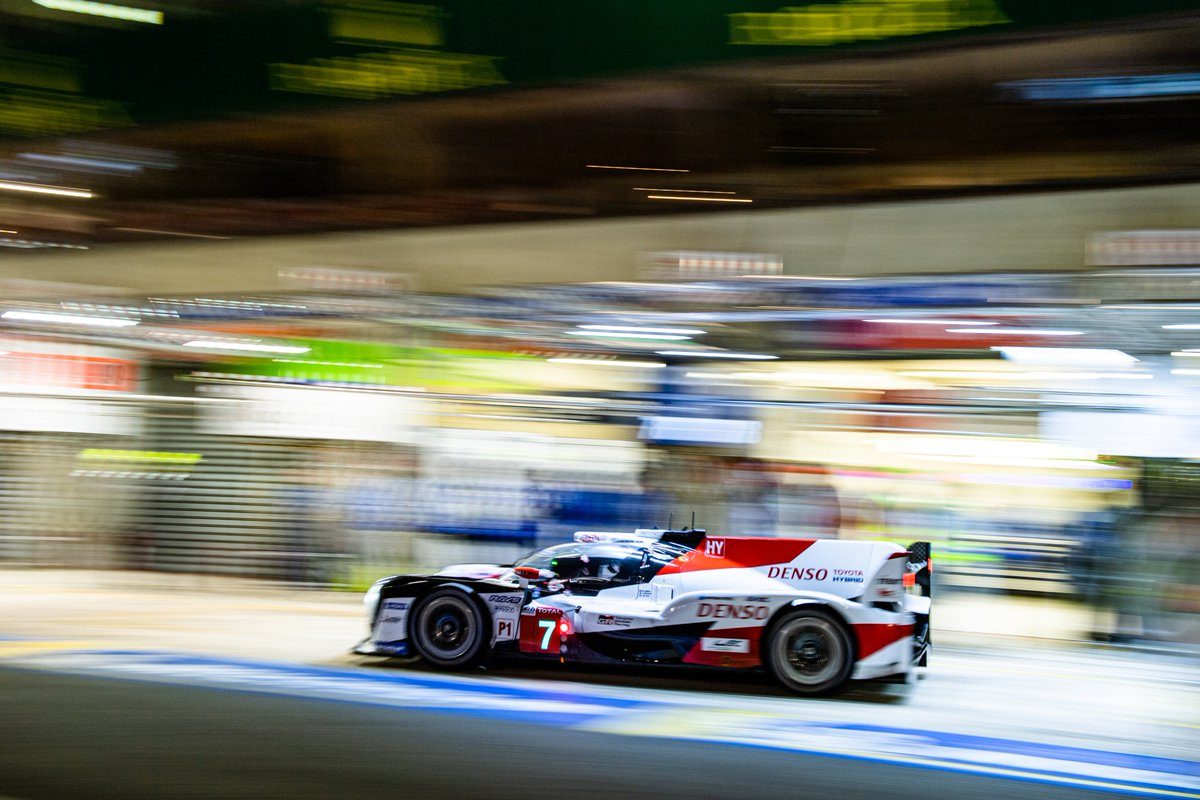 Toyota Gazoo Racing continues to run first and second outright while Ferrari holds sway in GTE-Pro at two-thirds distance of the 24 Hours of Le Mans.

It’s the #7 TS050 Hybrid which leads Hour 16 as the twice-around-the-clock race transitions back into daylight.

The two Toyotas exchanged positions through the pit stop cycle and various Safety Car periods during the night, with Kamui Kobayashi finding himself out front at the halfway point thanks to quick pit work on the #7 Toyota.

The gap between the front-running Toyotas swelled to over a minute during the 13th hour in favour of the José María López-piloted #7.

Fernando Alonso was not able to reduce that cushion in his morning stints with floor damage believed to be hampering the #8 Toyota’s pace. Alonso then handed over to Kazuki Nakajima during Hour 15.

Rebellion Racing took over third outright following a crash for SMP Racing in the mid-part of the night.

Halfway through Hour 11, Egor Orudzhev crashed the #17 SMP Racing LMP1 car out of third at Karting corner, with the damage too bad to continue.

This promoted the Thomas Laurent-driven #3 Rebellion to the first of the LMP1 non-hybrids.

Ferrari moved into the lead of the GTE-Pro class with AF Corse’s #51 after Kevin Estre pitted the #92 Porsche from the long-held lead in the 13th hour for exhaust repairs.

This ultimately dropped the #92 outside the top 10 in GTE-Pro, while the #91 Porsche assumed second from the #63 Corvette C7.R.

Both Aston Martins dropped out of the running for the GTE-Pro victory after crashes within minutes of each other in Hour 10.

Alex Lynn lost control of the #97 at Karting corner and slammed backwards into the tyre barrier, hobbling back to the garage for repairs.

Meanwhile, Marco Sorenson’s #95 Aston Martin snapped sideways at the kink before Indianapolis, one of the fastest parts of the track, skating across the gravel and impacting the tyres heavily.

The LMP2 field has spread out dramatically, partly due to Safety Cars splitting the class-leading G-Drive Racing entry from the rest.

Signatech Alpine is second, over a minute behind.

Keating Motorsports has almost a two-lap lead in GTE-Am with its Ford GT as their nearest rivals struck trouble or ran off the road overnight.

So far the race has seen a total of six Safety Car periods, with the notorious night portion at Le Mans claiming a handful of casualties.

As of Hour 16, there have been 10 retirements of the 61 cars that started.