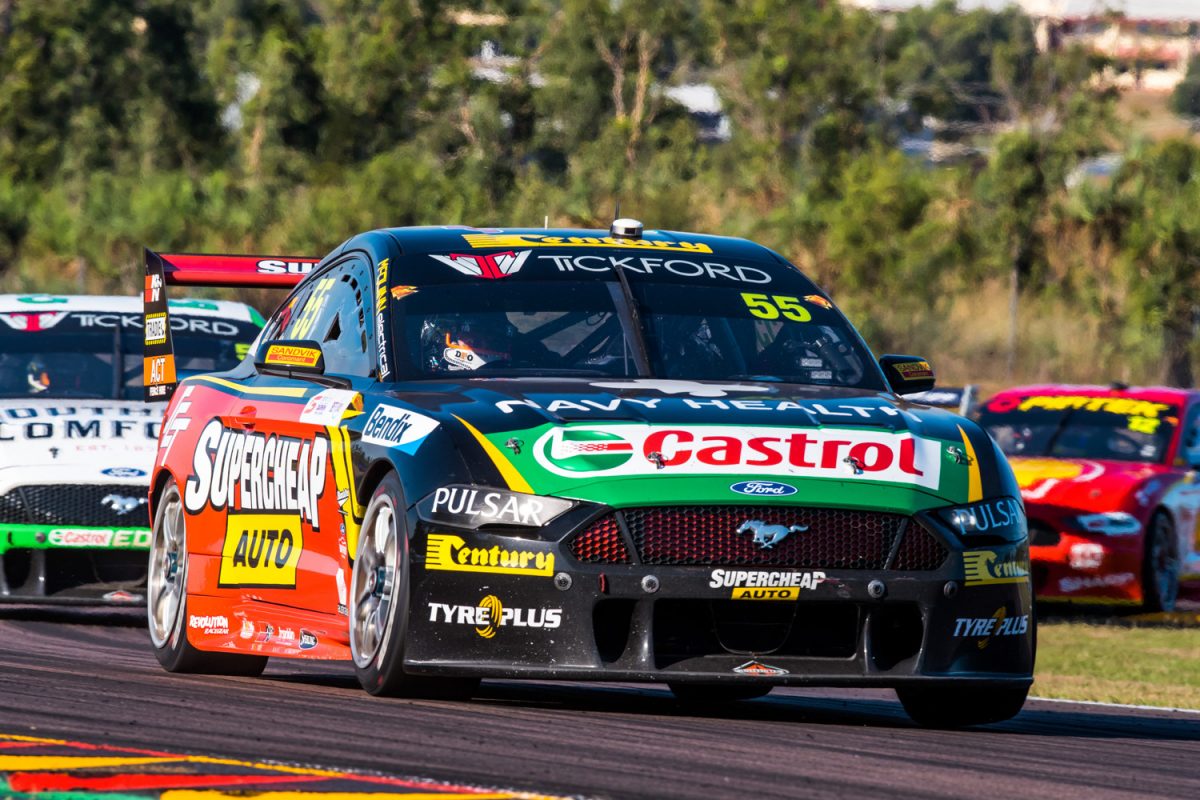 Chaz Mostert on his way to second in Race 15

Out of contract Chaz Mostert says ‘only time will tell’ if Tickford can offer him a championship winning car but admits the team has been making positive progress with the Mustang.

Mostert is at the centre of a busy silly season with the 27-year-old weighing his options for 2020 that include staying at Tickford, a move to another or team, or a drive overseas.

The 2014 Supercheap Auto Bathurst 1000 winner has been heavily linked to Shell V-Power Racing and has also admitted that he would be happy to remain at Tickford if they can deliver a championship winning car.

Mostert scored his sixth podium of the season on Saturday at Darwin after a combination of speed and an aggressive strategy that saw him pit early, netting a second position behind Race 15 winner Scott McLaughlin (Shell V-Power Racing).

While admitting that Tickford still has a deficit to title protagonists Shell V-Power Racing, the in-demand driver has been impressed by recent developments from his team.

“Only time will tell,” said Mostert when asked if Tickford could deliver a championship winning car.

“This weekend, there’s probably been a good vibe.

“There’s been some new parts go out on the car.

“The boys are working hard at the workshop, so that’s very positive signs when you see new parts go on your car.

“We’ve just got to keep working over the next couple of months, see if we can keep closing this gap, and we’ll work on a (2020) decision from there.

“I think any one of our own team cars could have probably got a podium.

“Our strategy worked the best.

“There’s still some stuff to chase. Scotty, he was super-fast, and we were fully tapped.

“It’s not like we were just looking in the mirror conserving. I was trying to go as hard as I could.

“We’re still lacking some pace on those boys. We got to keep stepping up.

“I feel like there’s quite a big deficit there, so we just got to keep chipping away.”

Despite the mounting speculation surrounding his future, Mostert is not letting the talk become a distraction and maintains focused on the job in hand.

“Look, it’s obviously a busy time of the year for me mentally and thinking about next year and stuff like that,” said Mostert.

“At the moment, we’ve just got to try and get results and then we’ll work out everything after that.

“(I’m) just focussed on the job this weekend and everything else will sort itself out.”

Tickford team boss Tim Edwards has already stated that both the team and Mostert want a to make a decision sooner rather than later.

“He’s the same as us, we want to have this resolved sooner rather than later,” said Edwards.

“The next two months are going to be quite important for that process.”

“We’d love to keep Chaz but we’ve also got to prove to him that we’ve got the goods to try to win a championship because that’s the most important thing to him.”