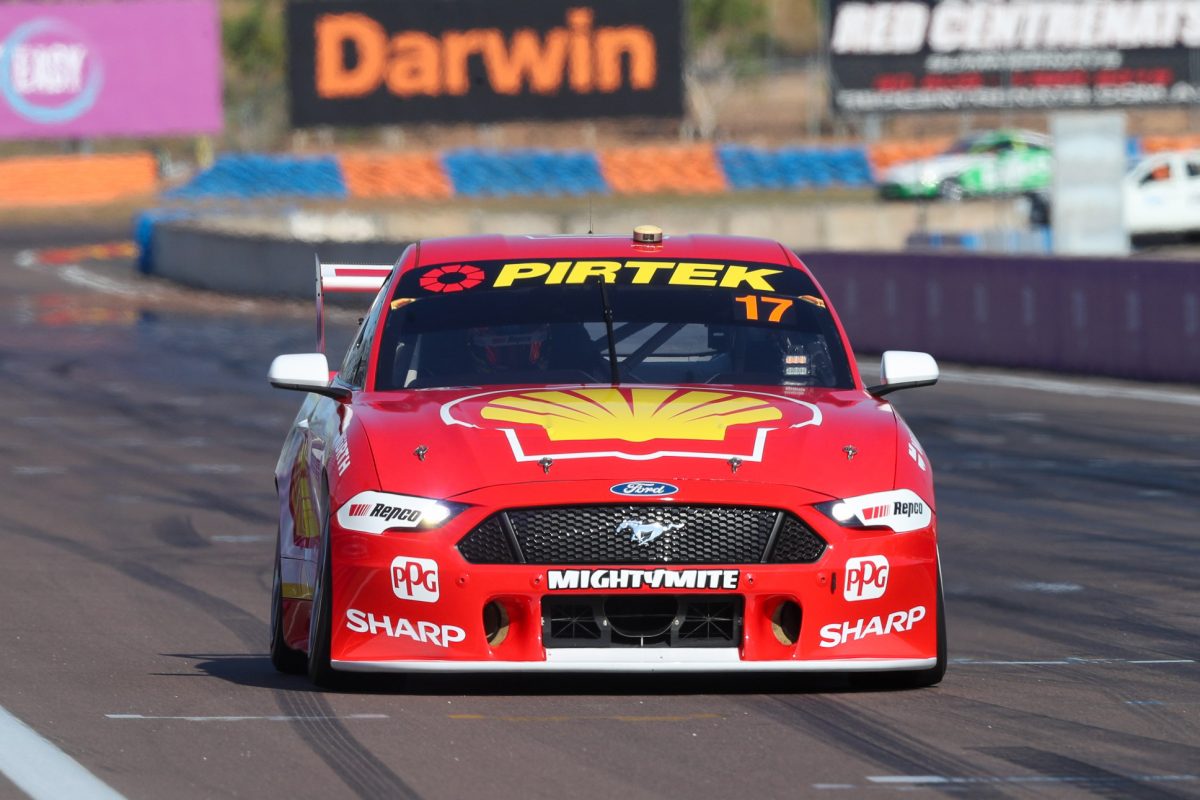 Scott McLaughlin has qualified on provisional Armor All Pole Position for Race 16 as BJR team-mates Nick Percat and Macauley Jones came to grief in a significant way.

The top three finished in the 1:05s bracket in qualifying for the second race of the BetEasy Darwin Triple Crown as McLaughlin had to dig deep to usurp an impressive David Reynolds.

He did so by breaking his year-old practice lap record around Hidden Valley Raceway with a 1:05.4737s, almost a tenth of a second quicker than the previous benchmark.

That put him 0.2858s faster than Penrite Racing’s Reynolds (#9 ZB Commodore), who had at one stage been a quarter of a second quicker than the #17 Shell V-Power Mustang.

Chaz Mostert, in third, was still more than half a second away from McLaughlin, while both the Red Bull Holden Racing Team entries of Jamie Whincup and Shane van Gisbergen have missed the Armor All Top 10 Shootout which follows later in the morning.

The 20-minute qualifying session was red flagged in the fourth minute due to the two Brad Jones Racing entries making heavy impacts with the wall at Turn 10. 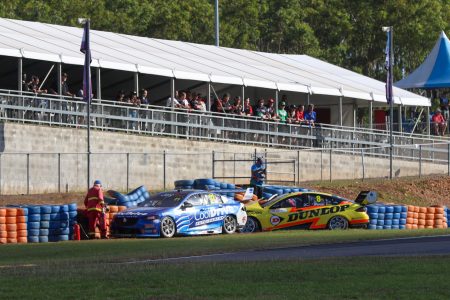 Percat was first to leave the circuit, spearing off and going nose-first into the tyre wall in the #8 Dunlop ZB Commodore.

Jones went off backwards seconds later in the #21 CoolDrive ZB Commodore and barely missed his stablemate as he too clouted the tyre wall which lines the embankment off to the outside of the circuit.

Percat alluded to possible brake knock-off as the reason for his prang, and was pessimistic about the chances of his car being turned around for this afternoon’s 200km race.

“Foot to the brake, and there was not a lot there and then by the time I kind of pumped it, it was not pumped,” he explained.

“Because it went long, I came off the side of the brake, then grabbed a bit of throttle. It was all happening.

“So, I tried to stop as much (as) I could and turned in really early to try and just minimise the impact or try and hopefully just try and shortcut the circuit liked a PlayStation game or something.

“So, just gutted for BJR and everyone because it’s hit the earth embankment. I’ll be surprised if we’re racing this afternoon, judging from what I saw.”

On the specifics of a possible brake problem, he added: “Well I came off the brake pedal because it wasn’t quite there like it normally is. But we need to look at the data.

“My first thought’s that the pedal was long. When you hit it, normally it’s solid and it wasn’t, and I’ve kind of fallen straight off it. Definitely grabbed both pedals, so, joy.”

Jones was also unsure as to exactly why he came unstuck.

“To be honest I don’t know (what happened),” said the rookie.

“Struggling with rear nervousness into there and lost the rear on the entry. I don’t know if there’s anything on the track or not, I need to look into that a bit further. It’s a very strange situation for both of us to go off in the same corner like that.

“I couldn’t see him going off, there was a fair bit of tyre smoke going on there. There was a decent gap there, I don’t know.”

When asked specifically if the incident for Percat might have influenced his own crash, Jones was not sure.

“Maybe but not so much really, I could see he was going off and he was off line but yeah, I don’t know.

“I don’t have much to say really. I need to look into it and it’s just bit of a crap one for the guys really.”

The session got underway with exactly 16 minutes left on the clock, representing a net loss of around 30 seconds after 15 minutes was added to proceedings.

McLaughlin had been slightly quicker than Reynolds with a 1:06.0317S at the time of the restart and the pattern of those two heading the order, as had been the case in Practice 3 and Qualifying for Race 15 a day prior, continued.

The championship leader shaved fractions of a second off his personal best on a new tyre in setting a 1:06.0118s on his second run, while Reynolds fired in a 1:05.7595s.

Reynolds put his cue in the rack but McLaughlin was among 22 drivers to head out for a final run to the chequered flag, and the DJR Team Penske driver blazed to his 1:05.4737s in somewhat cloudy conditions.

Mostert was on the bubble when he improved to a 1:05.9891s just prior to the chequered flag.

Ironically, the lap which knocked Whincup (#88 ZB Commodore) back from 10th to his ultimate position of 11th was Winterbottom in a Triple Eight chassis which the seven-time Supercars champion drove during the previous season.

Van Gisbergen was last of those remaining, in 23rd position, when he beat the chequered flag by less than two seconds to earn a final crack at a shootout berth.

However, how could only drag the #97 ZB Commodore up to 16th on the grid, four positions behind another Triple Eight customer in the #35 Matt Stone Racing ZB Commodore raced by Todd Hazelwood.

Results: Armor All Qualifying for Race 16