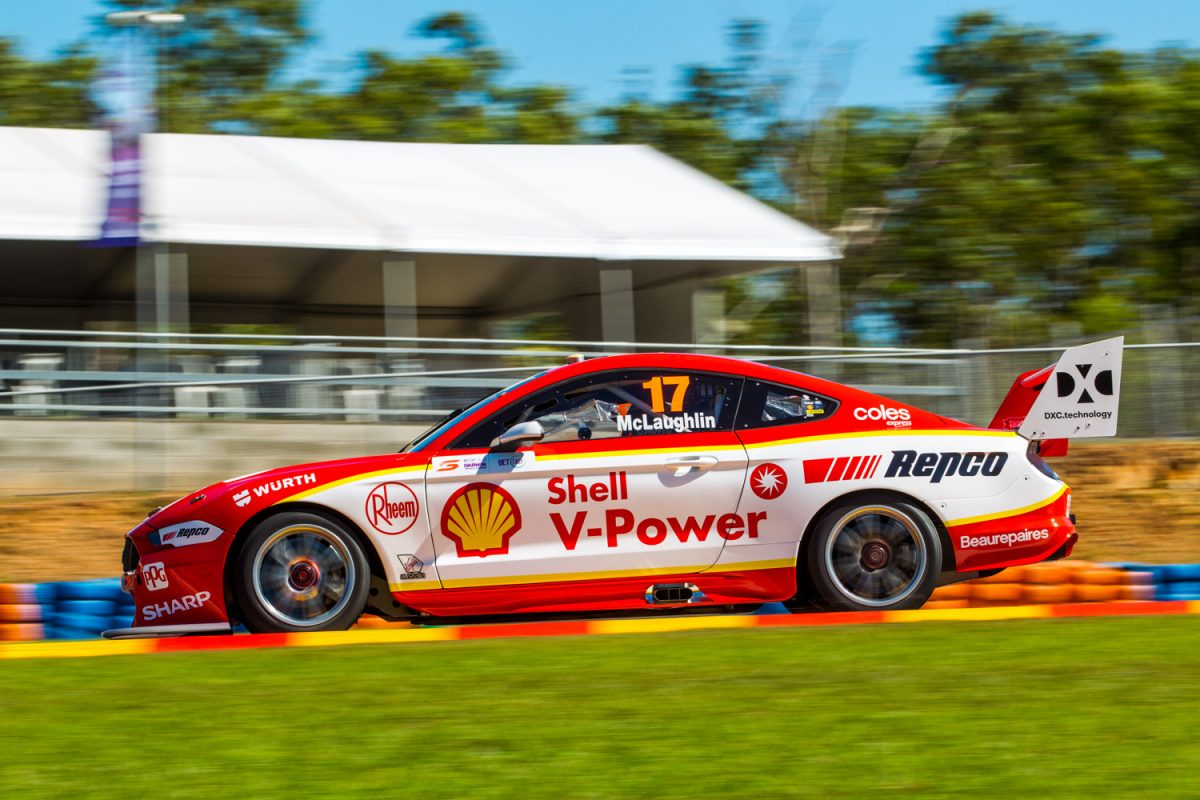 Coulthard was the big mover having qualified a provisional ninth earlier in the morning, and was in fact faster to the second sector than McLaughlin would ultimately go.

McLaughlin, however, was slower by only six thousandths in the first sector and three ten-thousandths in the second, before finding enough in the third to claim an 11th pole of the campaign in the #17 Mustang.

“That was a tough lap,” said McLaughlin.

“Fabs did an awesome job. I definitely think the track at the start was pretty good, and then obviously got hotter with new rubber and stuff, so to punch out a lap there was awesome. I think we’re looking good for the race.

The lockout is the sixth for DJR Team Penske in 2019.

“It’s great for the team, Shell V-Power Racing,” he added.

“To have two cars on the front row, where Fabs was to come up, and then for us to be one-two is fantastic. If we could do another one in the race it would be good.”

Coulthard said: “It was line ball. It could have gone either way.

“He’s (McLaughlin) been really good through Turn 10 all weekend and it’s probably been my little downfall.

“I was expecting to be up but coming onto the last corner was very line ball.

“Credit to all our guys. One-two, awesome start for the team; see what happens in the race.

“If I got pole, Scotty would be just as pumped as I am for him. I would have liked it to be reverse, but it wasn’t to be.”

David Reynolds all but matched Coulthard to the first sector but ended up third, one position worse off than when he started the session, in the #9 Penrite ZB Commodore.

Cameron Waters, who was fifth in the earlier 20-minute qualifying session, also virtually level-pegged with #12 to the first and second sectors before breaking the beam at 1:06.0196s in the #6 Monster Energy Mustang.

Lee Holdsworth was first driver on track and had a tidy run to a 1:06.0619s, better than his qualifying time, in the #5 The Bottle-O Mustang, with the second Erebus entry of Anton De Pasquale (#99 ZB Commodore) to join him on Row 3.

Will Davison provisionally qualified sixth but looked to have gone backwards having had to run used tyres on the #23 Milwaukee Mustang, clocking a 1:06.1871s.

His damage was minimised when both neither Chaz Mostert nor Rick Kelly, who followed Davison and Waters onto the circuit, could knock off the 23Red entry.

Mostert, in the fourth of the Tickford entries (#55 Supercheap Auto Mustang) will start outside of Davison, while Kelly (#15 Castrol Altima) was ninth.

Mark Winterbottom failed to set a time after a right-front tyre failure carted his #18 Irwin Tools ZB Commodore off the road at Turn 1.

He crawled back to pit lane without taking the chequered flag.

Having won Race 15 an afternoon earlier, McLaughlin is still in contention for an unprecedented Triple Crown.