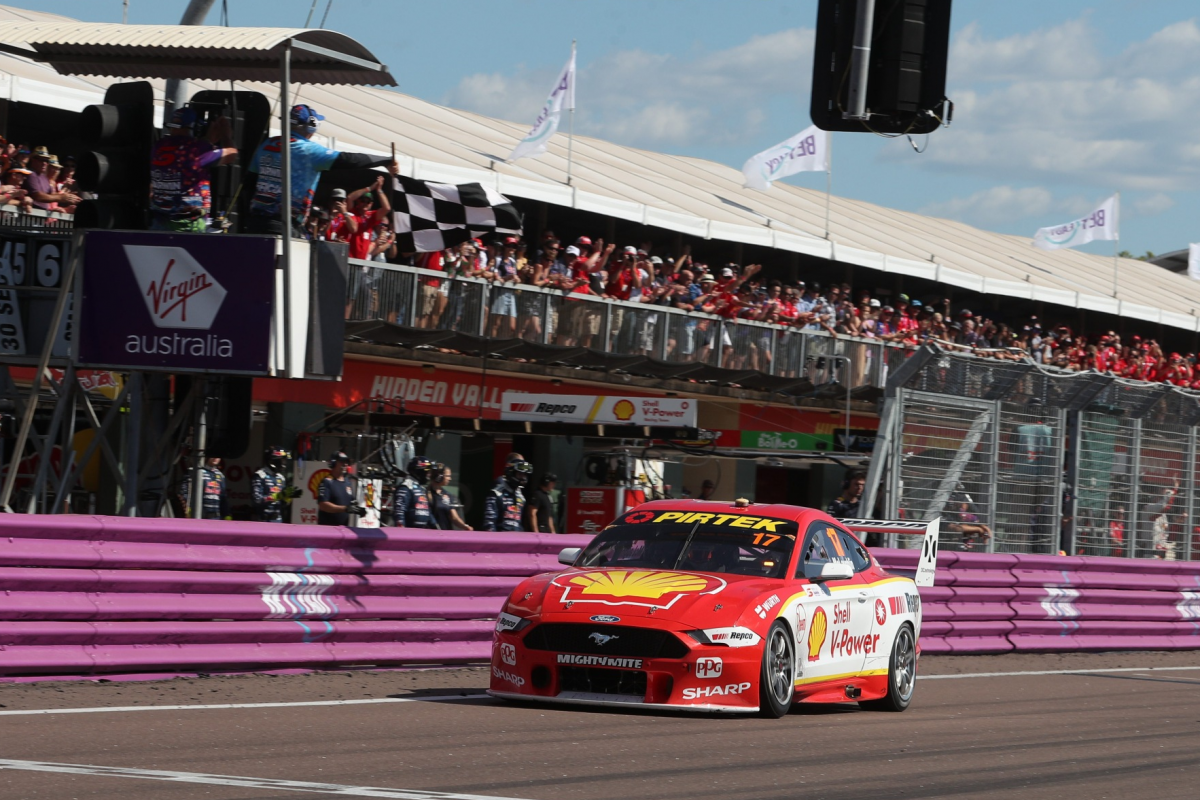 Scott McLaughlin has become the first driver to win the BetEasy Darwin Triple Crown as he eased to victory in Race 16 of the Virgin Australia Supercars Championship.

Tickford Racing’s Cameron Waters (#6 Monster Energy Mustang) held on for fourth while Jamie Whincup fought back from second-last on the opening lap to get home in fifth position.

Inside starter all but matched outside starter on the first two rows of the grid but when Coulthard was held wide at Turn 1, Reynolds was able to pinch second on exit, while Waters slotted into fourth, from Lee Holdsworth (#5 The Bottle-O Mustang) and Anton De Pasquale.

At the front, McLaughlin was regularly gapping Reynolds by around half a second a lap as Coulthard pressured the #9 Erebus Motorsport ZB Commodore.

Whincup had gained just over half a dozen positions on the race track when he filed into the lane on Lap 14, while Coulthard continued to tail Reynolds until he pitted on Lap 17.

Around 7.5s separated McLaughlin and Reynolds when both took their first compulsory pit stops three laps later, with McLaughlin matching his team-mate Coulthard in taking on 53 litres, while 60 litres of fuel was sunk into Car #9.

The Triple Eight cars were filled significantly shorter, reportedly around 30 litres for van Gisbergen and 34 litres for Whincup, which meant that Reynolds was as far back as sixth of those who had pitted before executing a textbook move on van Gisbergen at Turn 5 on Lap 22.

Whincup did likewise while Coulthard, who had fallen behind Waters and De Pasquale due to their lesser initial fills, got down the inside of the latter at the final corner on Lap 25.

De Pasquale let his team-mate past a few laps later, having taken on less fuel than Reynolds, just before Chaz Mostert (#55 Mustang) pitted from the lead to complete the first CPS cycle on Lap 28.

At that point, McLaughlin was over seven seconds up on Waters, followed by Coulthard, Reynolds, De Pasquale, Whincup, and van Gisbergen, while Mostert found himself in 15th due to running so long.

The Supercheap Auto Mustang recovered some ground during the middle stint due to fresher tyres, and Whincup got by De Pasquale at the start of Lap 33, but Coulthard could not find a way through on Waters once he had caught Car #6.

Predictably, the Triple Eight cars were pitting again soon, with Whincup in from fifth on Lap 34 and van Gisbergen from sixth on the next lap.

Waters rejoined ahead of them when he pitted from second on Lap 36, and Coulthard finally emerged ahead of #6 when he completed his CPSs another lap later.

Reynolds then took his second pit stop on Lap 38 and got back out in from of the #12 Mustang.

By the time McLaughlin had met his fuel obligations at the end of Lap 44, he had 10 seconds on Reynolds and counting.

Coulthard temporarily brought a gap of deficit of around three seconds to Reynolds back under a second in the dying stages, but did not go on with the gains.

Attention instead turned to the scrap just outside the podium placings, with Waters bottling up Whincup, Holdsworth, and Mostert with around five laps to go.

Mostert had been put back to 10th when van Gisbergen blazed past the #55 Mustang as the Ford driver exited the pits at the start of Lap 54, but re-passed Car #97 six corners later and, like Holdsworth, was on the rise due to having fresher rubber for the final stint.

Waters held off Whincup in the end, but Mostert got by Holdsworth at Turn 1 on Lap 67 to claim sixth.

Holdsworth finished seventh having made moves on Will Davison (#23 Milwaukee Mustang), who made life easy for his Tickford stablemate, and then De Pasquale in the run home.

De Pasquale (#99 ZB Commodore), Davison, and van Gisbergen rounded out the top 10, while Andre Heimgartner (#7 Plus Fitness Altima) was the lead Nissan in 11th.

McLaughlin not only bagged the previously elusive Triple Crown, having won Race 15 and qualified fastest in the Armor All Trop 10 Shootout, but also extended his series lead over Coulthard to 319 points as Reynolds consolidated third in the standings.

“It’s been an awesome thing at Shell V-Power Racing for the guys and girls, Ford Performance to get the Triple Crown, the first person ever which is really cool, and first team ever,” said McLaughlin.

“It’s a big team effort and missing our boy Richard (Harris, engineer) at home in the UK (due to the death of his father), but thoughts with him.

“It’s so cool, but I’ve got a great car, great team. The pit stops are unreal. Good battle with Fabs at the start.

Percat finished 15th while Macauley Jones was 22nd in the #21 CoolDrive ZB Commodore which was also put back together by Brad Jones Racing after their twin qualifying crashes.

The Supercars Championship remains in the tropics for the next event, the Watpac Townsville 400, on July 5-7.