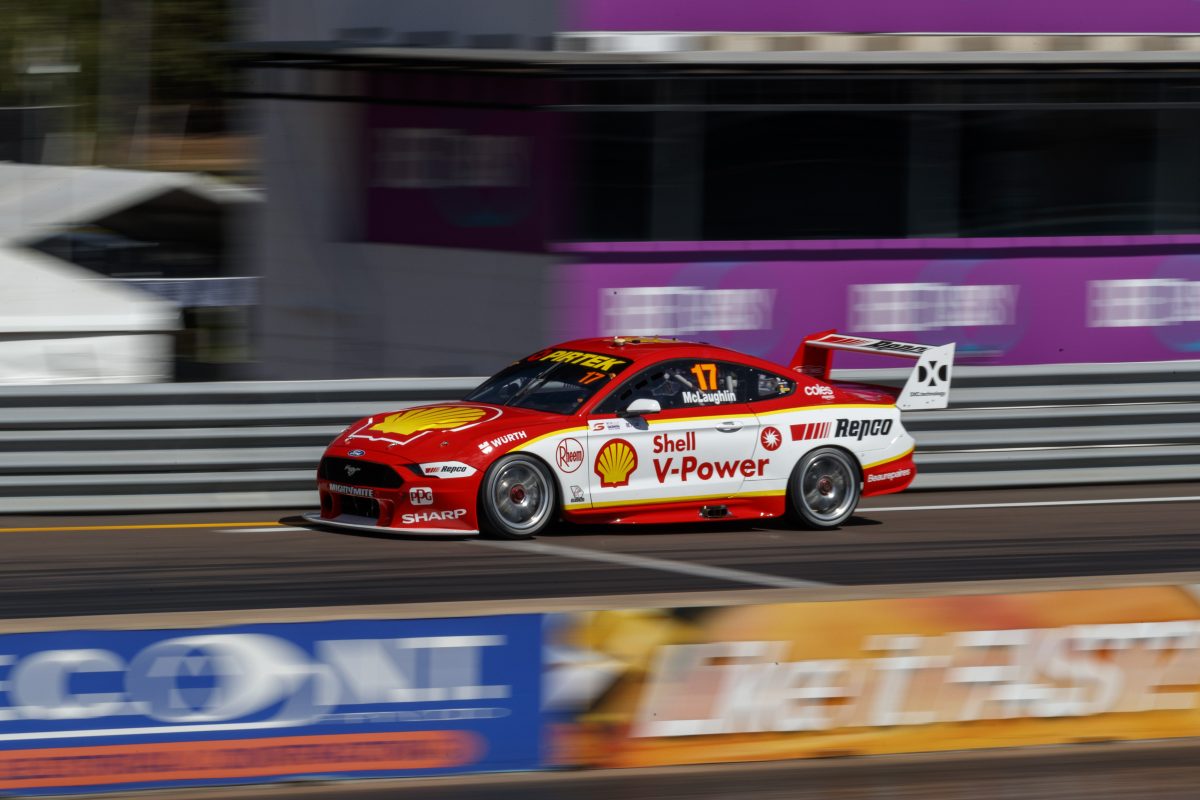 Scott McLaughlin was clear of the drama of the opening laps as he went on to take victory in Race 15 of the Supercars Championship at the CrownBet Darwin Triple Crown.

The Shell V-Power Racing Team driver survived a three-wide moment at the first corner before pulling clear after an early Safety Car to notch up his 11th win of the season.

Chaz Mostert used an undercut to jump from a probable fifth position to second in the #55 Supercheap Auto Mustang, while David Reynolds saw off Mostert’s Tickford team-mate Cameron Waters to put the #9 Penrite ZB Commodore on the podium.

In a manic opening to the race, McLaughlin (#17 Mustang), Reynolds, and Anton De Pasquale ran three-wide into the first corner after the latter bettered the front row starters when the lights went out.

De Pasquale got held wide and ceded a spot to Will Davison, who arguably made the best start of anyone at the head of the field from third on the grid, then got down the inside of Reynolds to take second position at Turn 6.

At the back of the field, Macauley Jones and James Golding had a coming-together between Turns 1 and 3 which somehow did not result in the former’s #21 CoolDrive ZB Commodore being spat out into the fence.

Nevertheless, Jones, Golding (#34 Boost Mobile ZB Commodore), and Jack Le Brocq (#19 Truck Assist ZB Commodore) all came to the pits after the latter also ended up involved in the mess, which will be investigated post-race.

On Lap 2, Tim Slade dropped a wheel off exiting Turn 5 and tangled with Rick Kelly (#15 Castrol Altima), resulting in the #14 Freightliner ZB Commodore being fired into fence and the Nissan driver ultimately issued a drive-through penalty.

It also resulted in a Safety Car being called, but not before a stoush just outside the top 10 as Mark Winterbottom (#18 Irwin Tools ZB Commodore) climbed over the side of Andre Heimgartner’s #7 Plus Fitness Altima having tried to go down the inside entering the main straight.

That incident bottled up a pack of cars, with both Todd Hazelwood (#35 Unit ZB Commodore) and Simona De Silvestro (#78 Harvey Norman Altima) outbraking themselves and running off up at Turn 1.

When the restart came on Lap 8, Davison thought he had a run on McLaughlin, which tempted Reynolds to the outside of Davison’s #23 Milwaukee Mustang at Turn 1.

Davison held off Car #9 but De Pasquale (#99 ZB Commodore) ended up wide and ceded his position to Waters (#6 Monster Energy Mustang), who also nearly picked off the other Erebus car of Reynolds as well.

The Erebus driver lost several seconds due to a slow tyre change on his right-front corner but when Mostert, who was a position back, came in a lap later, his stop was far cleaner and he would benefit from an undercut.

Davison and Reynolds pitted together at the end of Lap 19 and when Erebus got the latter serviced faster, there was contact in the fast lane before Davison was forced to file in behind, which would see #23 hit with a 15-second time penalty.

McLaughlin responded to the threat of Mostert by pitting on Lap 20 and when they shook out it was the championship leader ahead of Mostert, Reynolds, and Davison in terms of those who had been through the lane.

Davison let Waters have his spot Lap 32 and the 2015 Dunlop Super2 Series winner went after Reynolds, who had not been able to close up to Mostert despite having fresher tyres.

Waters tailed #9 in the final handful of laps but did not quite get close enough to make an attempt at a pass and settled for fourth.

“(I’m) so stoked for everyone at Shell V-Power Racing, it’s been an awesome run. Just got to keep pushing on,” he said.

“Unfortunately, my engineer Richard (Harris) … his Dad passed away in the early hours of the morning, so this is for him, and he’s had to head back to the UK.

Whincup put a tidy move on Holdsworth to take second position at Turn 1 on Lap 23, but had to do it again when he was kept out until Lap 28.

Armed with newer tyres, he came back from behind Holdsworth a second time to finish fifth, three positions ahead of where he started.

Van Gisbergen pitted a lap later than Whincup and subsequently put a move on James Courtney (#22 Mobil 1 Mega ZB Commodore), and then Davison, to claim eighth.

Courtney took the chequered flag in 10th but was promoted a spot due to the penalty hanging over Davison, with Scott Pye (#22 ZB Commodore) making for both the Walkinshaw Andretti United entries rounding out the top 10.

De Pasquale was 11th after his pit stop drama, a spot ahead of Davison, while rookie Garry Jacobson (#3 Rabble.Club Altima) was best of Kelly Racing’s Nissans in 14th.

Heimgartner might have bettered team-mate Jacobson but had to hold for 15 seconds in the pits due to weaving with the Safety Car lights out, and brought Car #7 home in 17th.

McLaughlin’s championship lead is now 298 points, almost a full round, over Coulthard, who revealed that a broken rear pushrod hampered him when he struggled to 10th on the grid earlier in the day.