Supercars’ latest parity adjustments to bring the Holden Commodore more into line with other models has left Kelly Racing frustrated that its Altimas have been overlooked.

The parity debate erupted again after the championship ratified an aero tweak designed to assist the Holden teams at this weekend’s BetEasy Darwin Triple Crown.

Agreed by the Supercars Commission, a small modification has been made to the Commodore’s undertray which is aimed to improve front downforce, while the rear wing angle has been reduced by a degree to allow for the change. The third round of parity changes this season has left Kelly Racing unimpressed given the squad felt that alterations should have been made to its ageing Altimas to close the gap to the Holden Commodore and Ford Mustang.

Over the off-season the Altima, now into its seventh year, underwent an aero re-homologation that included modifications to its splitter and gurney flap.

It did however receive a boost with Supercars electing to use the car as it base for calculating its centre of gravity adjustments for the Holden and Ford models in April.

“There clearly should (be changes to the Altimas) but the problem is (that) this car has been so outdated aerodynamically now that it’s not going to be a change of undertray that’s going to fix our car, when the cars have departed so far away from their original rules and the original road cars and the original intent,” team owner Todd Kelly told Speedcafe.com.

“We need to do a whole new car to match the new style of car, so you can complain and trim the undertray or make a change on ours and it’s not going to get us to where we need to be.”

Kelly admitted to being frustrated “given how all the cars in pit lane were supposed to match the existing cars.”

Asked if he felt there was parity amongst the models, Kelly added: “I don’t think I even need to comment on that (for you) to know the answer.”

While Kelly’s stance on parity in the category is clear, there remains a divide amongst Holden and Ford teams on the current state of play following the latest change, which follows adjustments to centre of gravity and a significant aero cutback for the Mustang.

Tickford Racing boss Tim Edwards is adamant the playing field is level as it stands.

“Yeah, I do actually,” said Edwards, when asked if he felt there was parity across the models.

However, the Holden side is less than convinced with Triple Eight boss Roland Dane claiming that ‘anyone who is sure’ there is parity is ‘being less than truthful’.

“To be honest, I’m not sure, I think anyone who is sure is being less than truthful,” said Dane. 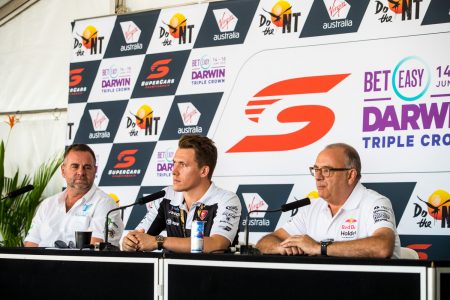 “We will see over the next few races.

“We’ve got some quite different circuits between here, between Townsville and Queensland Raceway, et cetera.

“You’ve got to be honest about it and say ‘Well we don’t know for sure’. We need some more data.”

The view is echoed by Walkinshaw Andretti United co-owner Ryan Walkinshaw who agrees that data is crucial in making parity decisions.

“I think Roland’s right. All these decisions are going to be data driven at the end of the day just like they have been so far this season,” said Walkinshaw.

“It’s a moving target that’s always changing depending on the amount of data that you get.

“As we got to more circuits, especially different types of circuits, that data accumulates, and you can make a smarter view of what the accuracy of the parity is.

“On the whole, for the good of the sport, we’ll focus on the data that drives the decisions.”

Next Story No impact at Hidden Valley from earthquake