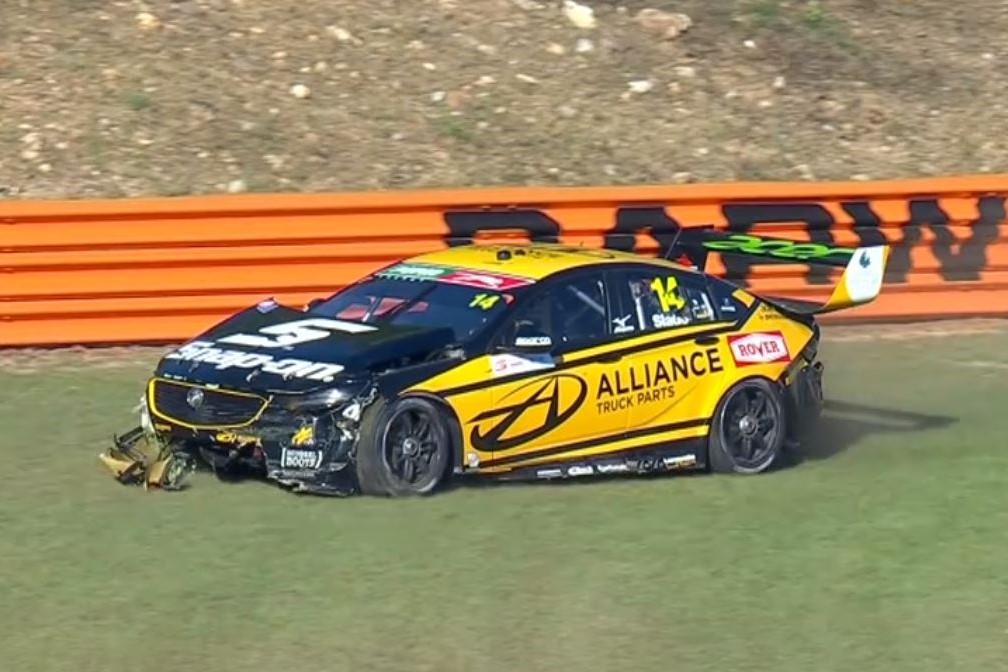 Rick Kelly has accepted full responsibility for the contact with Tim Slade which put the Brad Jones Racing driver into the fence in Supercars Championship Race 15 at Hidden Valley.

Slade was pushed off the road by Kelly’s Castrol Nissan Altima between Turns 5 and 6 on Lap 2 and crashed into the barrier, drawing the only Safety Car of the race.

The South Australian had dropped the Freightliner ZB Commodore off the edge of the track exiting Turn 5, which compromised his run up the short straight.

While that error went some way to explaining why Kelly hit the rear of Car #14, the Kelly Racing pilot, who was issued a drive-through penalty for the incident, did not attempt to shirk any blame.

“Basically a complete misjudgement on that corner on my part,” he admitted shortly after the race.

“He’s one of the good blokes in pit lane, you don’t want to take him out, but today we were having a big battle.

“He got into me at (Turn) 1 and doored me out of the way and I was behind him and having a tussle, and I was trying to get underneath him into the hairpin and give him one back.

“Unfortunately I misjudged the poor run he had, you could see him out on the kerb on the left and I had a good run underneath him and as he was coming back to the right to take the braking line, like I say, I misjudged him and tagged him into the fence.”

Kelly went on to finish a lap down in 21st position but emphasised that his outcome was still better than that of Slade and the BJR crew.

“It’s a shit day for us but you don’t want to take someone else out,” he stated.

“I got a drive-through penalty for it but he’s worse off, he’s in the fence, his whole team have to fix that car now, so apologies to those guys.

“We want to have good, hard battle like that but you don’t want to turn someone into the fence so tomorrow we won’t be doing that.”

Speaking during the race, Slade said that he was taken by surprise when the contact came.

“I actually had no idea,” he recounted.

“I got Rick at Turn 1 that lap then sort of looked in the rear-view mirror and saw him on the outside to the right. Then next thing, I was in the fence. It was a bit of a surprise.”

It was another bruising race for BJR, which also faces repair work on the Macauley Jones Team CoolDrive entry after the rookie was involved in a Lap 1 crash with James Golding and Jack Le Brocq.

Jones cranked sideways after apparent contact between Turns 1 and 3 but was saved from also ending up in a wall by the presence of Golding’s Boost Mobile Holden.

His own ZB Commodore was patched up and sent back out, with Jones the last of the finishers in 22nd, eight laps down from race winner Scott McLaughlin.

Race Control advised that the clash would be investigated post-race.