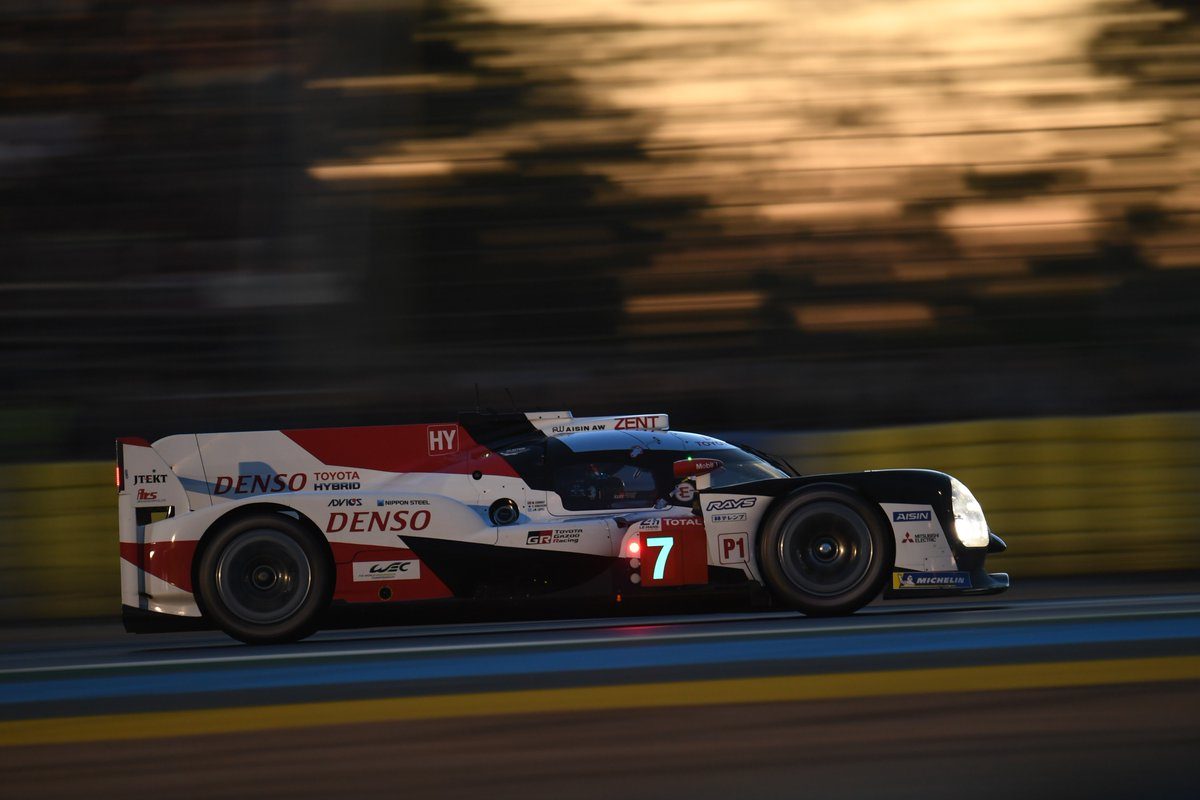 Kobayashi’s pole time, a 3:15.497s was set in Qualifying 2 on Thursday afternoon (local time), while a heavily interrupted Qualifying 3 in the evening saw no major changes outright.

It came after the team had to replace the monocoque on the #7 Toyota after Wednesday’s qualifying shunt.

The #8 Toyota TS050 Hybrid of Fernando Alonso, Sébastien Buemi and Kazuki Nakajima qualified four tenths behind from its sister car, while SMP Racing’s #17 entry was the first of the non-hybrids in third, a further two tenths back.

Qualifying 3’s interruptions meant that the #8 Toyota had limited opportunity to pip the sister car from the top; Nakajima starting a flying lap in the ‘happy hour’ period just as a red flag came out for debris.

Numerous slow zone interventions broke up the on-track rhythm for the remainder of the two-hour session, despite a late effort from Buemi in the #8 who was ultimately not able to improve.

GTE-Pro was hotly contested as the #95 Aston Martin Racing Vantage of Marco Sørensen, Nicki Thiim and Darren Turner emerged on top in class in 29th outright with a lap time of 3:48.000s early in Qualifying 3.

Five different manufacturers graced the top five in GTE-Pro, the #67 Ford GT in second, Corvette Racing’s #63 C7.R in third after a late lap from Antonio García, followed by the #93 Porsche of Earl Bamber and the #82 BMW M8 GTE.

Leading the GTE-Am pack was the #88 Dempsey-Proton Racing Porsche of Satoshi Hoshino, Giogio Roda, and Matteo Cairoli in 45th outright.

They bettered the sister #77 car of Matt Campbell, Julien Andlauer and Christian Ried by two tenths.

Qualifying 2 was red-flagged for 25 minutes after Thomas Laurent stopped on track prior to Mulsanne Corner, due to an engine failure on his #3 Rebellion.

Meanwhile, the #1 Rebellion also suffered an engine failure in Qualifying 3 stopping before Arnage.

Notably, the 62-car field has been reduced by one, with the #99 Dempsey-Proton Racing Porsche withdrawn due to driver Tracy Krohn not being cleared to race following a heavy shunt in Free Practice.

Friday marks a break in track activity for teams while a warm-up session on Saturday morning (local time) will be the last hit out ahead of the 24 Hours of Le Mans which begins on Saturday at 2300 AEST (1500 local time).