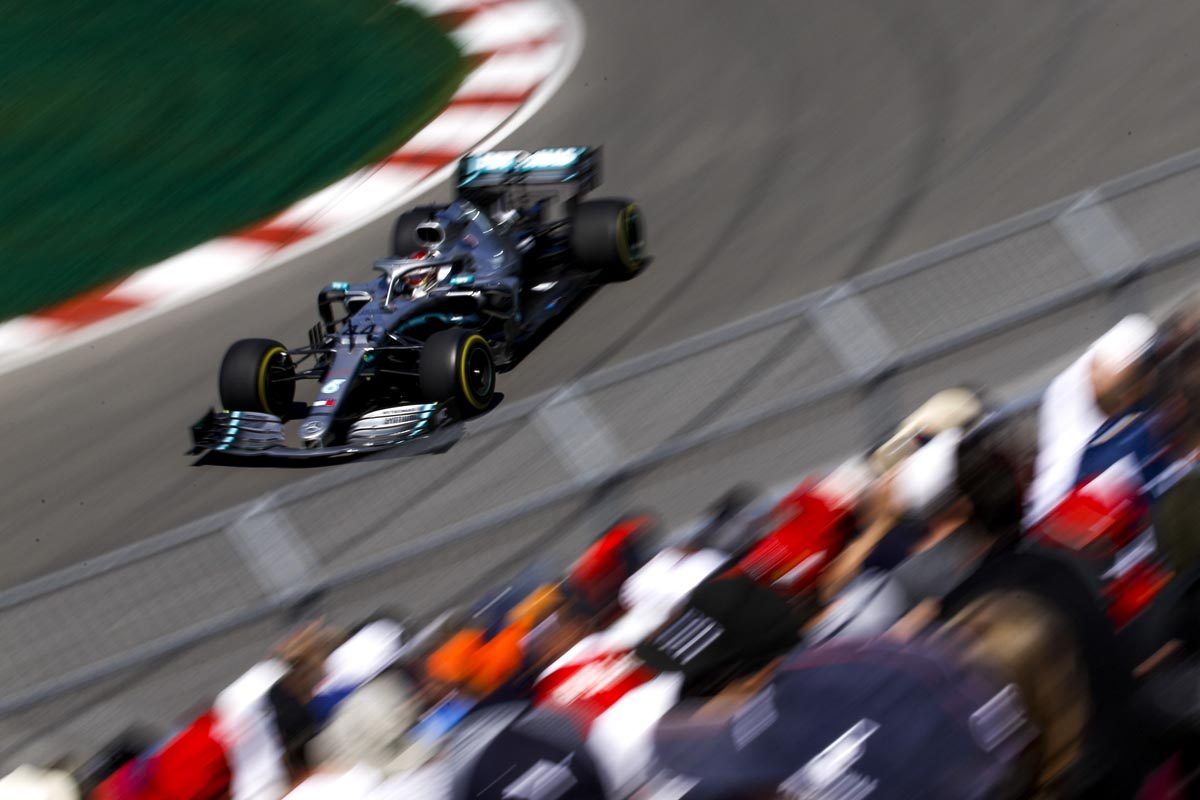 Lewis Hamilton has won a controversial Canadian Grand Prix after a time penalty saw Sebastian Vettel stripped of victory at the chequered flag.

Hamilton ran in Vettel’s wheel tracks for much of the second half of the race before a mistake from the race leader saw him run off the road and rejoin narrowly ahead of Hamilton.

The incident was punished by the stewards with a five second penalty, which meant that although Vettel crossed the line first, with Hamilton just over a second behind it was the Englishman who was named victor with Charles Leclerc third.

A clean start saw Vettel hold his advantage over Hamilton and Leclerc at the start, with Ricciardo slotting into fourth place.

Nico Hulkenberg climbed a place at the expense of Valtteri Bottas in the opening lap to demote the Mercedes driver to seventh.

Pierre Gasly was the first of the front runners to stop, swapping a set of soft rubber for hard compound after seven laps.

Having been tucked up behind Ricciardo, it forced Renault to stop the Australian, rejoining just as Norris came to a halt with damage to his right rear suspension.

Overheating brakes were the culprit, the heat melting the suspension which caused the failure.

It came after McLaren stopped Carlos Sainz in the early laps to clear debris from a brake duct.

Importantly for Ricciardo, his stop saw him emerge in front of Gasly, also with a set of hard compound tyres capable of taking him to the finish.

Hulkenberg stopped from fourth after 16 laps, rejoining behind Ricciardo but ahead of Lance Stroll and Gasly.

Hulkenberg’s stop finally released Bottas, the Finn more than 16 seconds away from Vettel in the race lead.

The race the settled into a lull as those who started on the medium compound tyres, primarily those at the front of the race, continued to circulate as they waited for their pit window to open.

Vettel pitted from the race lead after 26 laps, taking on a set of hard compound tyres, rejoining just ahead of a train of cars in a net third place.

The gaggle behind Vettel served as protection for the German, preventing Mercedes from stopping in reaction.

Having had to complete another lap, Hamilton finally stopped after 28 laps and rejoined just ahead of Bottas who was yet to stop.

Ferrari opted to leave Leclerc out on track, telling him over the radio that he was “going long” for his first stint.

After 33 laps Leclerc finally stopped, falling to third to leave Verstappen as the last of the front runners to take service.

Bottas and Ricciardo then engaged in a fierce battle for fifth, the pair running side by side into the final chicane, Ricciardo maintaining the advantage.

Two laps later they were side by side again, the Mercedes clearly holding more pace but Ricciardo inch perfect in his defence.

It was an inevitability, and Bottas cruised by the Renault at the end of Lap 38 to move into fifth place.

Out front, Hamilton had eaten into Vettel’s four second advantage to sit within the DRS zone.

A mistake from Vettel at Turn 3 on Lap 48 opened half an opportunity for Hamilton to sneak through it would what prove the decisive moment of the race.

Vettel lost the rear end on turn in, bouncing over the grass and rejoining such that there was no way through for Hamilton.

It caught the eye of the stewards who looked into Vettel’s rejoin, the German appearing to steer right to squeeze Hamilton out of space against the wall.

Verstappen finally stopped at the end of Lap 48 as he returned to the fray in seventh place, fitting a set of used medium tyres.

With 12 laps remaining officials elected to hand Vettel a five second penalty for a dangerous re-entry following his earlier off.

Bottas was called into the pits with three laps remaining for a set of soft tyres as Mercedes chased the point for fastest lap.

Vettel then crossed the line first, but with his penalty and Hamilton nailed to his rear wing it meant the Mercedes driver was the victor.

It was his fifth of the season, and continued Mercedes’ perfect record in 2019.

Bottas climbed back to fifth at the flag, one spot back from Verstappen who improved from ninth on the grid.

Daniel Ricciardo and Nico Hulkenberg combined to give Renault its best result of the season, while Lance Stroll drove well to bank ninth place for Racing Point on home soil.

Formula 1 now moves to Le Castellet for the French Grand Prix on June 21-23.