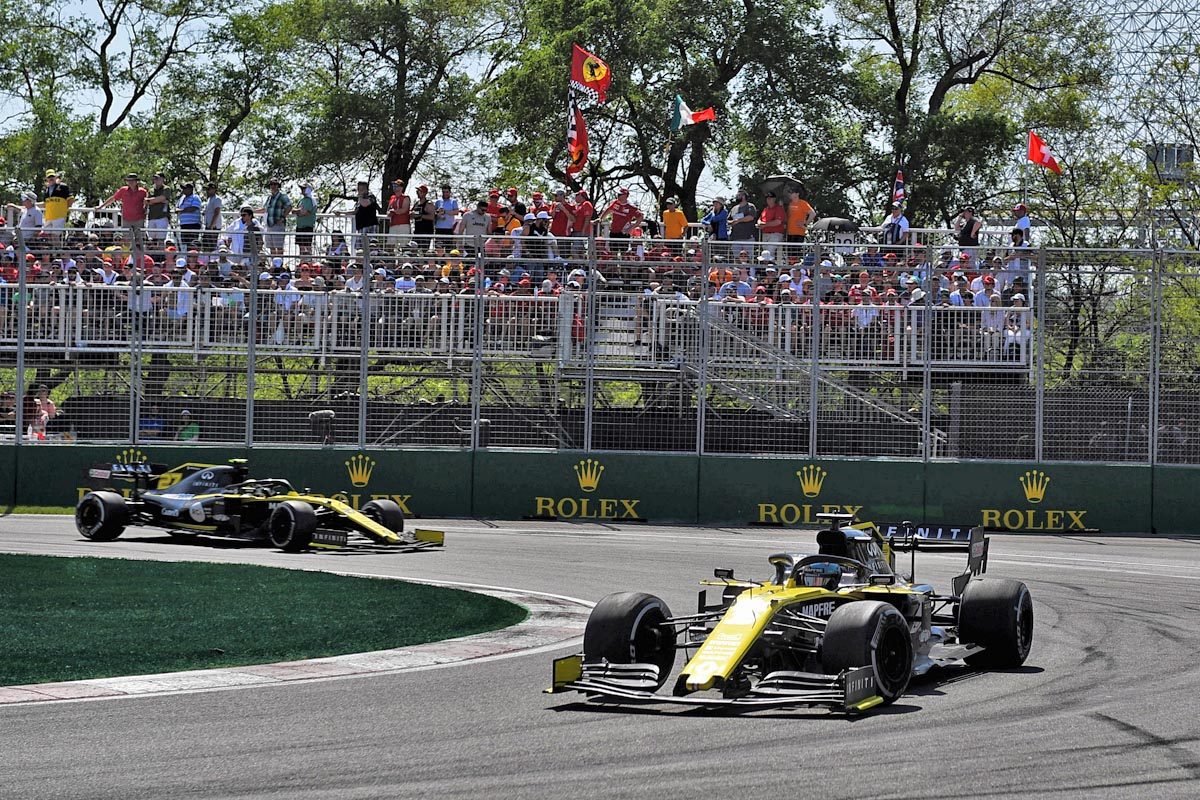 Daniel Ricciardo says Renault’s double points finish in the Canadian Grand Prix is reward for the team after a ‘pretty stressful’ start to the year.

Ricciardo headed team-mate Nico Hulkenberg to the flag in Montreal, the pair notching up sixth and seventh place finishes respectively.

It’s the best result for the Anglo-French squad in 2019, with the points bonus seeing the team climb to fifth in the constructors’ championship, just two points behind McLaren in fourth.

It’s a sizeable reversal of fortunes for a team which, heading into the previous race in Monaco, had been floundering in eighth.

“I knew that from my starting position I knew the race was probably going to be more of a defence than an attack,” Ricciardo said after the race.

“Probably the most positive thing was holding off Bottas for so long and just being in that fight with a Mercedes for a few laps, that was cool.

“I would have love to have done it with Max (Verstappen) was well but I think he was coming with too much pace at the end with that tyre, so he got me very easily.

“With Bottas, I think as well we showed that even when he had DRS we still had pretty good straightline speed and I feel there we’ve bridged the gap a lot.

“Still a lot of work to do but it’s certainly looking good.”

The battle with Bottas saw Ricciardo run side by side with the Mercedes driver into the final chicane on multiple occassions in a fight that lasted half a dozen laps.

Though a positive experience, it likely came back to bite the Australian later in the race as he begun to struggle with tyre wear.

“When he (Bottas) came up behind me I thought he was going to get me easily,” Ricciardo said.

“I was going to defend one lap. If he got me I wasn’t really going to fight to the edge.

“I kind of held him off one lap then I kind of saw in my mirrors and thought ‘maybe he’ll start to hurt his tyres a bit’.

“From that point on I was like ‘let’s have some fun’. I think I hurt my tyres a bit doing it, but it was worth it.

“You could tell he was getting a bit agitated and I was just enjoying it, enjoying making life difficult.”

Ricciardo dropped another place to the fresh-tyred Verstappen en route to sixth, with Hulkenberg called off by the team in the latter stages as the two Renaults ran line astern.

It safeguarded a solid result for the team, its first double points result since the United States Grand Prix last year.

“It’s the first double points of the year. It’s been a long time coming and to get sixth and seventh is big,” Ricciardo said after the race.

“And to see, I guess, McLaren without points today from what I saw, it’s encouraging for us.

“We’ll build on this. I’m glad the team’s in a good place now. Bit of relief for everyone.

“It’s been pretty stressful at times this year but I’m glad we can enjoy a strong weekend here.”

Formula 1 next heads to the French Grand Prix, Renault’s home event, on June 21-23.

Previous Story Furious Vettel claimed 'they're stealing the race from us'