Sebastian Vettel has stolen pole position from Lewis Hamilton with a last gasp lap during qualifying for the Formula 1 Canadian Grand Prix.

The interrupted session looked set to go the way of Mercedes once again before Vettel was able to improve with his final lap.

Hamilton had held provisional pole, improving on his own best with his final effort, but it ultimately fell two tenths short.

Following their first flying laps in the opening moments of qualifying, the Mercedes pair were only third and fourth, Hamilton ahead of Valtteri Bottas but trailing Leclerc and Max Verstappen.

They dropped even further when the Ferraris continued on for a second timed lap, Vettel moving up to second to reshuffle the grid.

Another effort from both Mercedes drivers saw them improve, Hamilton to second before Bottas went quickest by a quarter of a second.

Falling by the wayside at the end of the first part of the session was Sergio Perez (Racing Point), Kimi Raikkonen (Alfa Romeo), Lance Stroll (Racing Point), and the two Williams of George Russell and 2008 race winner Robert Kubica.

The Ferraris again had the mettle of Mercedes as the second phase of qualifying began, with Vettel heading Leclerc, then Hamilton and Bottas.

Pierre Gasly shot into second place using a set of soft compound tyres as those around him used the slower, medium rubber.

Another run from Hamilton and Bottas on the yellow walled tyres moved the pair to the top of the timing screens as the session drew to a close.

The field from sixth fastest down headed out in the final moments to set a time as the clock ticked down to zero. 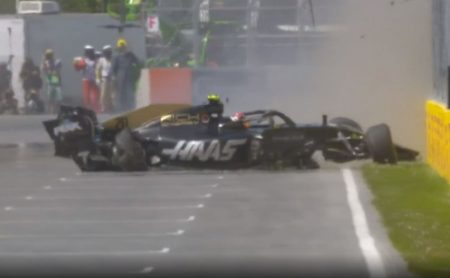 Shortly after the clock expired a spin from Kevin Magnussen saw the Haas driver plunge heavily into the wall at the exit of the final chicane.

The Dane slewed across the circuit and collided with the pit wall before bouncing back across the track, the incident triggered by a brush with the Wall of Champions with his right rear wheel.

It cost Verstappen dearly, the Red Bull driver behind Magnussen on track and outside of the top 10 and therefore unable to improve his time.

Ironically, Magnussen ended the session inside the 10, though his car was in no state to take part with initial reaction suggesting a pit lane start for Sunday’s race with a sizable repair for Haas ahead.

The incident caused a delay in the session before Qualifying 3 got underway, though with only nine participants owing to Magnussen’s absence.

Hamilton was the early pace setter with a 1:10.493s while Bottas on his first flyer was lucky not to smack the wall as he spun out of Turn 2.

Vettel was almost two tenths adrift in second, and Leclerc seven tenths away in third after the first runs.

Leclerc’s second push lap was well off the pace, improving on his own personal best but still more than half a second away from what Hamilton had managed.

Oversteer hurt Ricciardo’s first lap, the Australian just sixth and two places behind his team-mate Nico Hulkenberg before a front wing tweak was made for his second attempt.

Bottas had just a single flying lap in the session owing to his early spin, dropping a tenth to the first split with an untidy lap.

It saw him run wide at the hairpin towards the end of the lap before crossing the line with only the fifth fastest time of the session.

In his wheel tracks, Hamilton crossed the line to improve on his personal best, only for Vettel to demote him with a last gasp effort.

The result was Vettel’s first pole position since the 2018 German Grand Prix, the race many see as the turning point of last year’s championship.

As impressive as Vettel’s pole late was, Ricciardo climbeded to fourth with a stunning lap to claim Renault’s best qualifying result of the season.

UPDATE: Carlos Sainz will start from 12th on the grid after being issued a three-place grid penalty for impeding Toro Rosso’s Alex Albon.