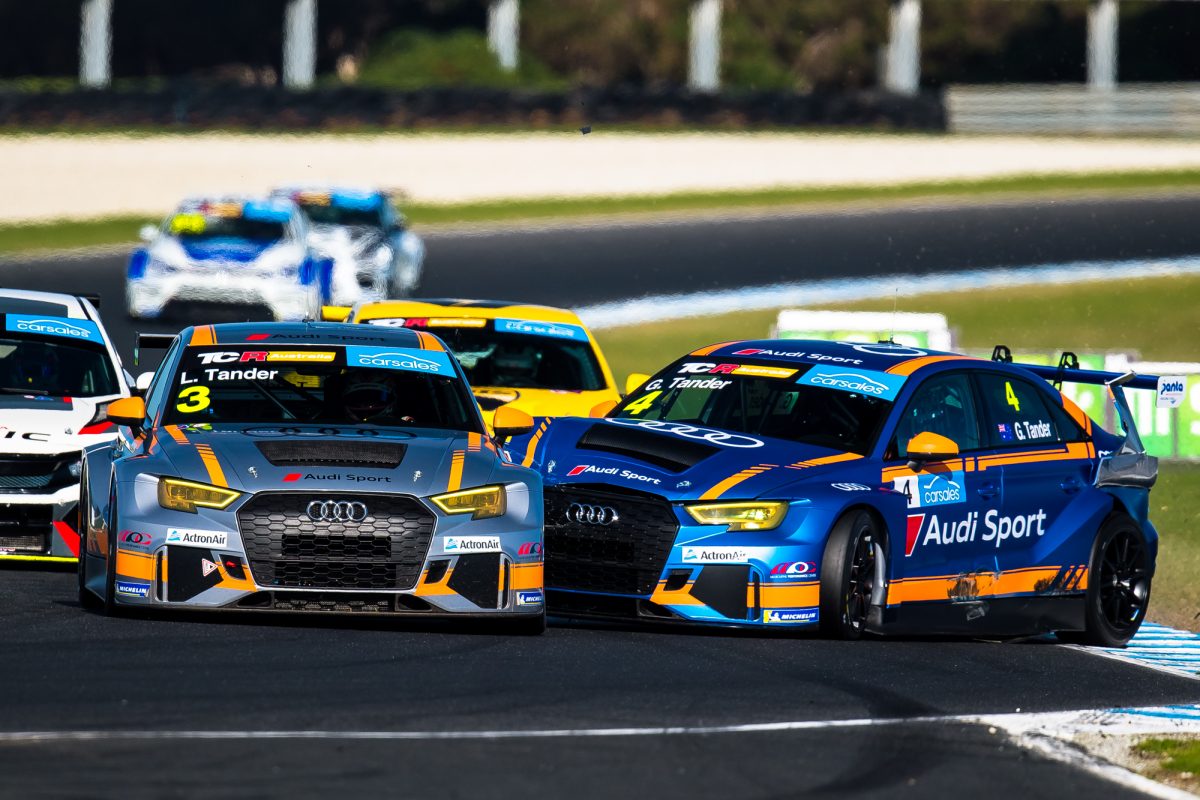 Garth Tander expressed his frustration at being involved in a multiple car tangle that resulted in contact between him and wife Leanne in TCR Australia Race 2 at Phillip Island.

The incident occurred at Turn 4 when Melbourne Performance Centre team-mates Aaron Cameron and Garth clashed, that saw the latter spear into the side of wife Leanne’s Audi RS3.

It forced Garth’s already damaged Audi out of the race while ruining an opportunity for Leanne to score a strong result, who rejoined the fray after a quick visit to the pits.

The crash was one of two spectacular incidents on the opening lap as Garth hit the rear of Andre Heimgartner, who was trying to avoid the spinning James Moffat Renault on the run to Turn 2.

Speaking after the race Garth claimed that he was hit by Cameron, which triggered the chain of events and was ‘pissed’ to see the clash take an opportunity away from Leanne.

The pair did however end the weekend with Garth finishing fourth and Leanne ninth with the former starting from the back of the grid in Race 3, that he didn’t expect to start due to the damage sustained.

“I got involved in that thing when Moff (James Moffat) went off. It was a classic Turn 2 at Phillip Island type thing. I had damage, but it wasn’t that bad,” said Garth Tander

“And then going down to Turn 4 I got whacked from behind and took both Leanne and myself out. So that was pretty disappointing.

“When I saw Leanne’s car spinning I was pissed, because it was going to be a good race for her.

“My car had damage, I didn’t know how my race was going to go because of the Turn 2 thing, but when I saw her car spinning I was pissed because I thought it was a great opportunity for her.”

“I don’t think we’ll laugh, she’s bloody dirty. And rightly so, because the guy who caused all of the damage to us was third in the last race.

“But I’m not going to throw the kid under the bus, everyone is struggling on the cold tyre. It’s just unfortunate that our cars were near each other and that happened.”

Reflecting on the clash, Leanne added: “It wasn’t his fault, he tells me. He said he got a hit, and the guy that hit him admitted he hit Garth, so that’s what happened,” said Leanne, who was forced to start Race 3 from pit lane.

“I looked in the mirror as I approached Turn 4, and Garth was half looking to have a go but I braked pretty late and he slotted in behind me, so I knew I was fine.

“I just started to turn in and copped it. I knew he was behind me, so at first I thought ‘what the’.

“But I also thought he wasn’t having a go, so I figured someone had hit him. Or he was going to be in big trouble.

“It was disappointing. It didn’t just ruin Race 2, but Race 3 because the damage took longer to repair than they thought and I had to start from pit lane.”

Both Garth and Leanne were making one-off appearances in TCR Australia in Round 2 at Phillip Island.