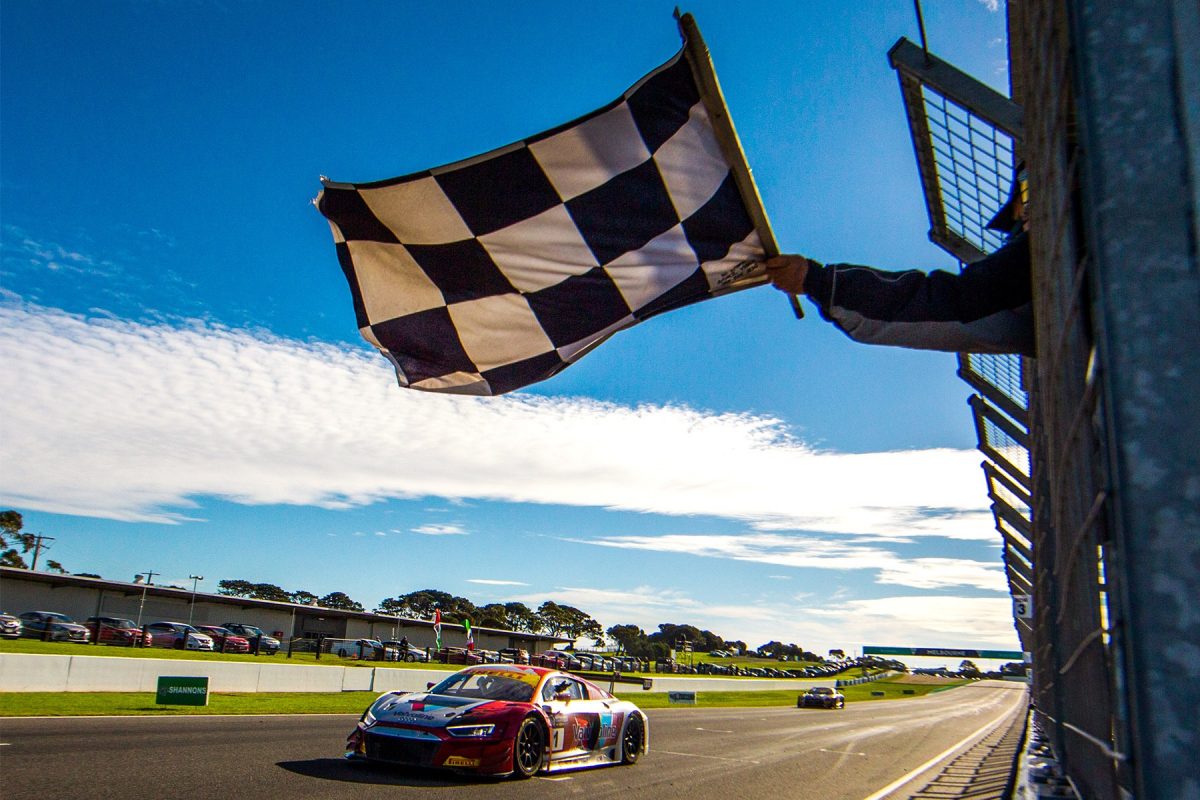 Garth Tander has delivered Audi a hat trick of Australian GT Endurance Championship victories at Phillip Island after he and Geoff Emery (#1 Valvoline) triumphed in the opening round of the competition.

The duo started from the second row of the grid in third position as Peter Hackett in the Mercedes-AMG quickly took the lead of the race off polesitter Fraser Ross (#59 59 Racing) around the outside of Turn 1.

The Safety Car appeared only 20 minutes into the three-hour race when David Crampton lost control of his #50 GT4 KTM X-Bow at the final corner.

Crampton was stuck in the car that became buried underneath the tyre barrier, prompting stewards the red flag proceedings.

Crampton escaped from the car unharmed as track repair staff quickly amended the barrier. The race restarted 25 minutes later as the clock continued to count down.

Unwanted drama fell into the hands of race leaders Hackett and Dom Storey when their car failed to start up and get going once the race resumed under the Safety Car.

A battery issue was to blame as the AMG sat stationary on the grid. Mechanics were required to bring the car back into the pit lane to fire the Mercedes up and re-join the circuit.

Ross reclaimed the lead before a flurry of cars, including himself, entered the pit lane for the team’s first driver change of the race.

By the halfway mark of the race, it looked to be a close battle between the Audi of Tander/Emery and McLaren of Ross/Simpson.

Tander had a close call in the pit lane with Mercedes’ Tony D’Alberto (#8 Scott Taylor Motorsport) when they were caught up in an incident after Tander’s Audi was released into the fast lane ahead of D’Alberto’s AMG.

The two drivers appeared to make minor contact; however continued on unpenalised throughout the remainder of the race.

Jamie Whincup (#777 The Bend Motorsport Park) would suffer another dose of Phillip Island back luck after the seven-time Supercars champion lost his left-front wheel with 57 minutes to go.

It comes after Whincup suffered the same issue when he was last here for the Supercars round, losing his front-right tyre in Race 9 in April.

Teams began to make their final stops for the race with just under one-hour to go as Tander held station at the front of the pack by around 20 seconds.

During Simpson and Ross’ final driver swap to go to the end of the race, mechanics endured minor wheel nut issues, briefly delaying their time in the pit box.

The car returned to the track in third position behind leading Tander and second placed D’Alberto.

Ross would go on to chase down D’Alberto with 15 minutes to go and secure second position on the podium ahead of the Mercedes AMG driver.

Whincup and co-driver Yasser Shahin could only manage 10th after their front-tyre drama.

The Australian Endurance Championship heads to The Bend Motorsport Park for Round 2 of the series in July.