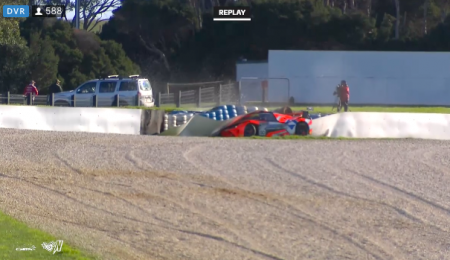 The opening race of the Australian GT Endurance Championship at Phillip Island was suspended 20 minutes into the three-hour race after David Crampton (#50 M Motorsport) crashed at high speed on the outside of the final corner.

Crampton was all alone when he lost control of his KTM X-Bow GT4 car at the final corner, sailing across the gravel on the outside of the circuit and hitting the tyre barrier.

It is believed a mechanical failure caused the accident.

Crampton was unable to exit the car immediately as the conveyer belt holding the tyre barrier came to rest on top of his car.

The GT4 driver escaped from the car unharmed as the X-Bow was removed by recovery marshals. Track repair staff started amending the barrier shortly after.

The #50 X-Bow of Crampton and Trent Harrison is one of two GT4 cars contesting this weekend’s round, fielded by M Motorsport. The sister #48 X-Bow is being driven by Justin McMillan and Glen Wood.

“I just turned into the last corner, and the front went out,” Crampton explained in the pit lane.

“I was just a passenger. The guys are replacing everything on the front, and hopefully we can get this thing back out there again.

“I was having a great race with Justin (McMillan), we were really going for it. I settled into a good race pace.”

Accidents at Lukey Heights and down into Turn 1 by last year’s #48 KTM X-Bow brought out approximately one hour worth of red flags.

The race restarted after a 25 minute break.