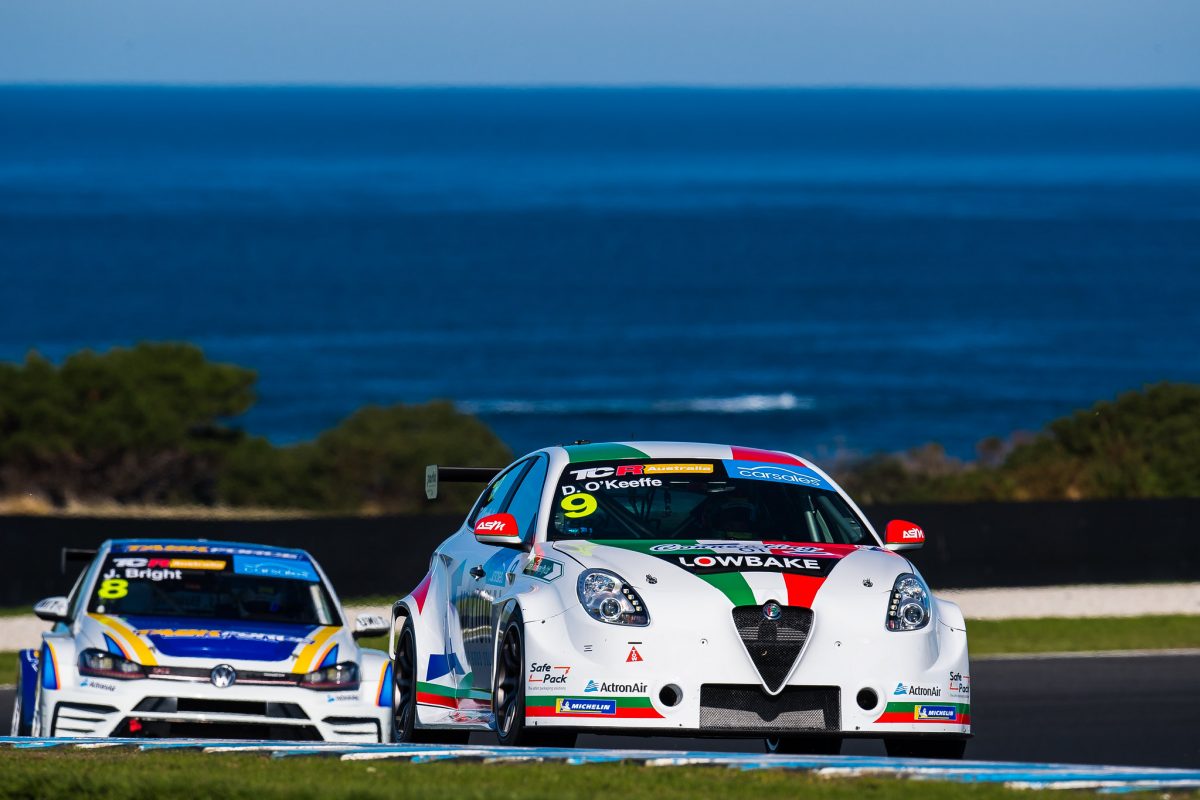 The ASM Alfa Romeo driver made no mistake from pole position while avoiding plenty of carnage behind to take a comfortable win by 4.9s at the Victorian circuit.

Series leader Will Brown (HMO Customer Racing, Hyundai) finished second after an amazing recovery having dropped from second to the rear of the field on the opening lap.

O’Keeffe managed to hold the lead into Turn 1 while the fast starting Tony D’Alberto in the Wall Racing Honda Civic Type R leapt from fourth to second as he passed Jason Bright (Alliance Autosport, Volkswagen) and Brown.

Drama then struck Brown as the front row starter ran off the road at the Southern Loop.

Further back, Brown’s HMO Customer Racing team-mate Nathan Morcom and John Martin were involved in an incident which brought out the Safety Car.

Once racing resumed on Lap 3, O’Keeffe powered into a two-second lead with D’Alberto in pursuit.

There was frantic action behind the pair in the battle for third as Bright and Garth Tander (Melbourne Performance Centre, Audi) made contact.

Bright appeared to nudge Tander, who attempted to pass the Volkswagen around the outside at Turn 1, which resulted in Tander going off the road.

This allowed Kelly Racing’s Andre Heimgartner to surge into third having started from ninth on the grid.

The Safety Car was then called again with Bright at the centre of another incident.

This time the Volkswagen driver hit the rear of Heimgartner, forcing the Subaru into a slide at Turn 3 before Jimmy Vernon (Alfa Romeo) joined the fray.

Vernon, who had started from 12th, tried to duck down the inside of the pair but made contact with the Subaru and spun across the track and into the gavel trap.

O’Keeffe powered clear of D’Alberto on the following restart although all eyes were on the battle for second between Moffat and the recovering Brown, who amazingly hauled himself back into the mix.

The fight intensified at the Honda Hairpin as Moffat dived underneath D’Alberto, while Tander and Brown looked to make ground.

Brown managed to pass Tander, who ran wide, and it didn’t take long for the Hyundai man to claim third from D’Alberto.

The action continued right to the flag as Brown took second from Moffat with an impressive move at the Hayshed on the final lap, and O’Keeffe took the win.

D’Alberto was left to settle for fourth, ahead of Tander and debutant Hamish Ribarits (Melbourne Performance Centre, Audi).

The top 10 was completed by Alex Rullo (Kelly Racing, Opel/Holden), Chris Pither (Garry Rogers Motorsport, Renault), Leanne Tander (Melbourne Performance Centre, Audi) and the recovering Heimgartner, who had ventured back to the pits following the contact with Bright and Vernon.

TCR Australia will return for Race 2 on Sunday at 1315 AEST.