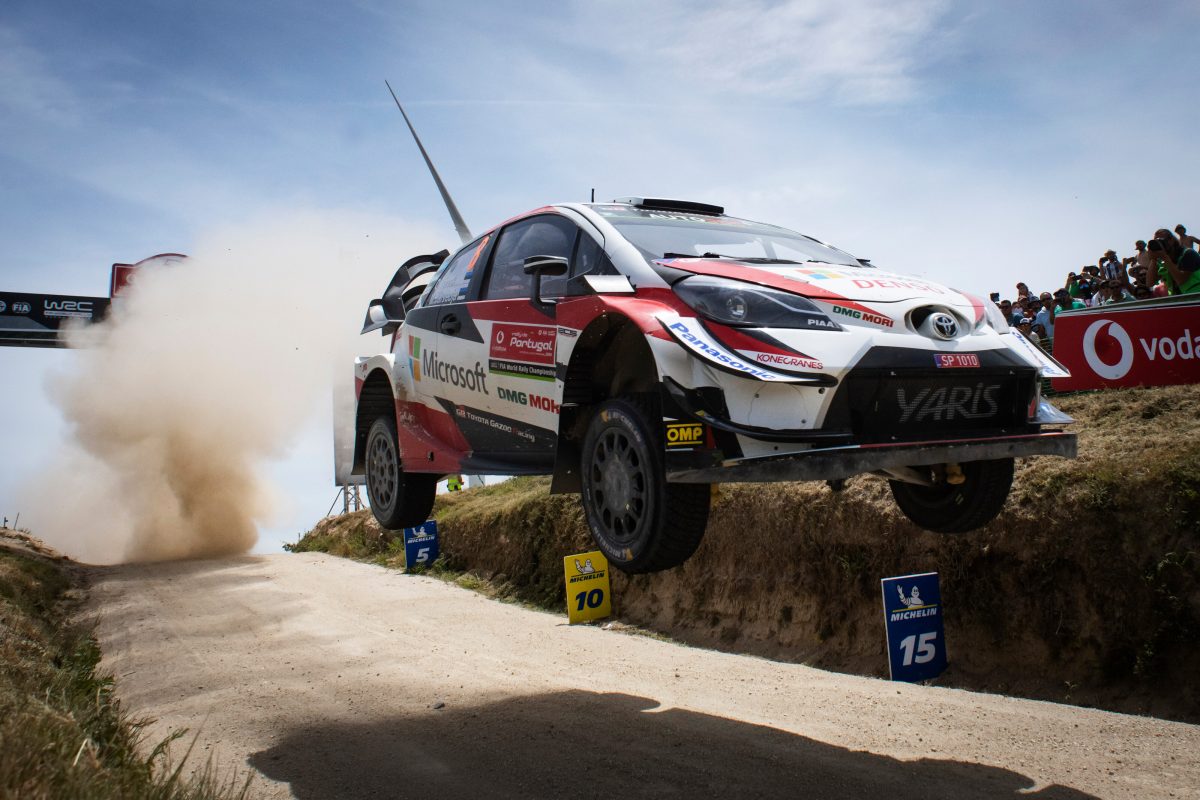 Ott Tanak has taken a second straight event victory as the 2019 World Rally Championship reached its halfway mark in Portugal.

The Toyota Gazoo Racing driver won the seventh round of the season by 15.9s from Hyundai’s Thierry Neuville, with Citroen’s Sebastien Ogier retaining the championship lead by finishing third overall and claiming maximum Power Stage points.

Dani Sordo won Special Stage 1 on Friday morning and remained on top at the end of the next test before his Hyundai slowed with a fuel pressure problem.

Tanak assumed the lead of the rally and held it for the balance of the event, although his weekend was not without its challenges.

His team-mates Jari-Matti Latvala and Kris Meeke remained in touch through much of the first two days before the former retired with a damper failure during the Saturday afternoon loop.

Tanak also had damper problems which saw him hold a 4.3s lead over Meeke heading into Sunday.

The Brit got even closer before spinning on the penultimate stage and hitting a tree stump on the Power Stage.

It could have been a bigger victory for Tanak but he slowed on the Power Stage, through which he was ultimately third quickest, to ensure that Ogier would be first on the road next time out in Italy.

Neuville was second for the rally, and the Power Stage, by virtue of being in the right spot when Latvala and Meeke struck trouble.

Ogier had already been hampered by opening the road on the Friday and finished the event 41.2s behind Neuville.

Such was the attrition in the Manufacturer ranks, WRC2 Pro winner Kalle Rovanpera finished sixth outright in his Skoda Fabia R5 Evo.

Latvala was seventh overall and Sordo 23rd with just a Power Stage point to show for the Spaniard’s efforts.

Hyundai’s other driver, Sebastien Loeb, also suffered fuel pressure problems before his rally came to a slightly early end when he hit a bank during the Power Stage.

Esapekka Lappi was fifth when he rolled his Citroen on the Sunday morning, coming to rest on his wheels only for broken suspension to finish him off later in the day.

Ogier is two points ahead in the drivers’ standings from Tanak, and Neuville another eight points behind.

Hyundai’s advantage over Toyota at the top of the manufacturers’ championship is 20 points.

Rally Italia Sardegna is next up on June 13-16.