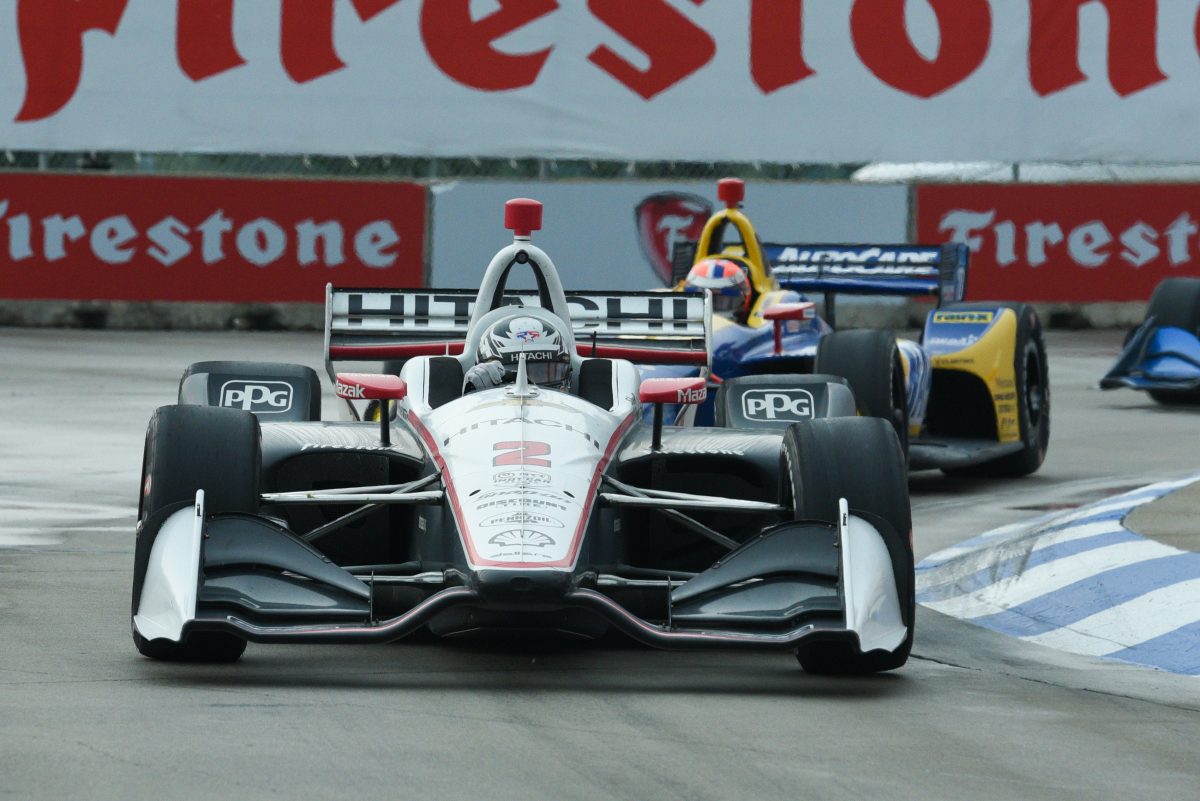 Josef Newgarden has won a rain delayed opener to IndyCar’s Detroit double-header while Will Power and Scott Dixon both ended up deep in the field after separate dramas.

Race start was pushed back over an hour due to lightning and heavy rain, and the 70-lap distance changed to a time-certain 75 minutes.

Conditions were still challenging when the race was about to get underway and Zach Veach (#26 Andretti Autosport Honda) swapped ends during the warm-up laps, meaning a start under Caution.

Alexander Rossi led the field away from pole in the #27 Andretti Autosport Honda while Dixon passed Newgarden’s #2 Team Penske Chevrolet for second on the first green flag lap.

Power qualified the #12 Team Penske Chevrolet in 12th but had already gained one spot due to Veach’s spin, another as Matheus Leist (#4 AJ Foyt Racing Chevrolet) looped into the wall, and a third by overtaking Graham Rahal (#15 Rahal Letterman Lanigan Honda) at Turn 3 just before the yellows came back out for Leist.

The Australian climbed to fifth in the laps following the restart, and Felix Rosenqvist (#10 Chip Ganassi Racing Honda) passed Newgarden for third, while Rossi continued to lead Dixon.

Rosenqvist handed back third spot to Newgarden when he made an error on Lap 12 before Power got by the Swede on Lap 14.

Newgarden was first of the front-runners to change from wets to slicks on Lap 17 and the rest followed in the Caution which came almost immediately after, due to Ed Jones (#20 Ed Carpenter Racing Chevrolet) running into the wall.

Power was dropped early and lost his right-front wheel at the end of pit lane, meaning he had to crawl all the way back around and would also be penalised.

Newgarden headed Rossi, Dixon, Rosenqvist, and Ryan Hunter-Reay (#28 Andretti Autosport Honda) for the restart but there was disaster for Dixon within three laps.

The New Zealander glanced the inside wall at Turn 6, breaking the steering on the #9 Chip Ganassi Racing Honda, and he failed to make the finish for the first time since the 2017 Indianapolis 500.

A rare mistake for the five-time champ. The last DNF for @scottdixon9 was two years ago. #INDYCAR // #DetroitGP pic.twitter.com/h8e3YpifVu

Takuma Sato managed to pass Hunter-Reay and Rosenqvist to move into third in a similarly short burst of green flag running, brought to an end when Leist came to grief again.

Newgarden saw off Rossi in the 11 laps which followed the fourth and final restart, as they amassed a total of 43 laps in the time which was allowed.

Around eight tenths separated them at the chequered flag while Sato drifted to over 11 seconds back from the lead in the #30 Rahal Letterman Lanigan Honda.

Rosenqvist, Hunter-Reay, Simon Pagenaud (#22 Team Penske Chevrolet), and Rahal also ran as you were in the last segment of the race.

Power finished on the lead lap in 18th, having passed Santino Ferrucci (#19 Dale Coyne Racing Honda) on Lap 41, while Dixon was officially 22nd in the 22-car field.

Newgarden is the series leader by 25 points over Newgarden, with Rossi another eight back in third, with another qualifying session and race on Sunday (local time).