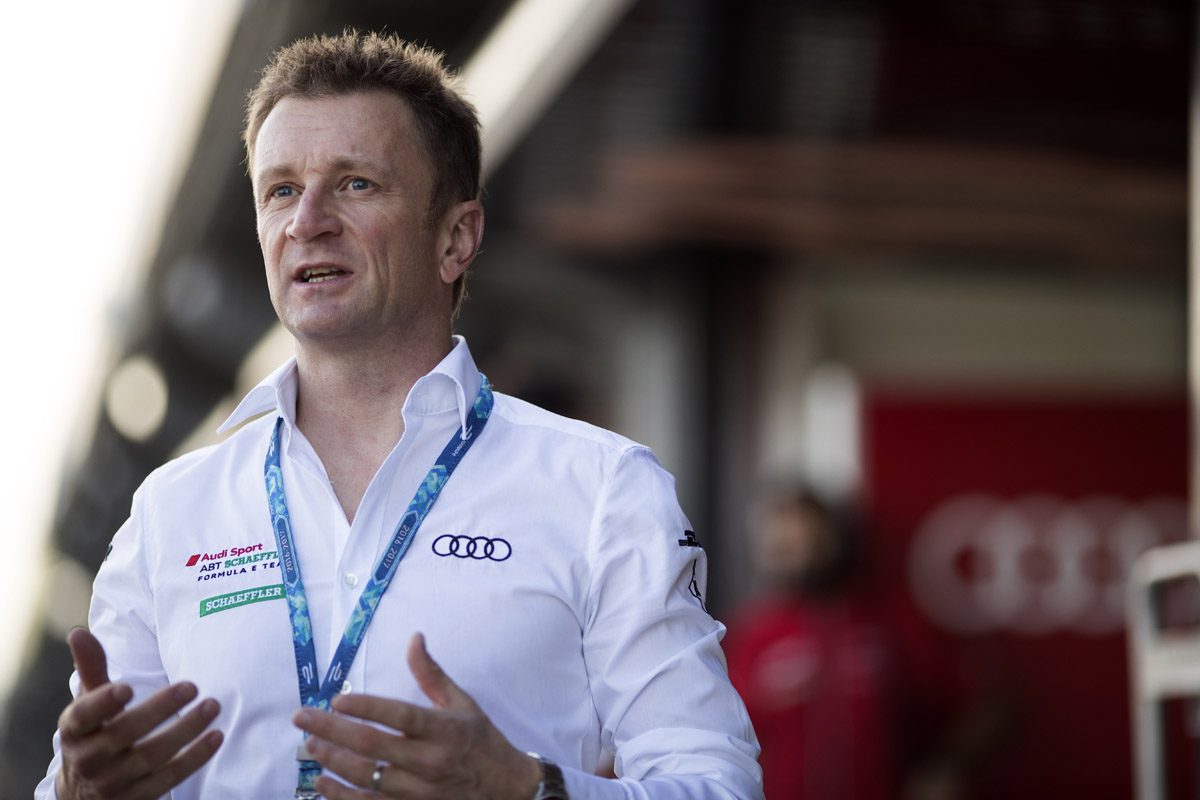 SPEEDCAFE.COM: You’ve been involved in so many aspects of motorsport, how does Formula E compare?

ALLAN McNISH: It doesn’t, it is a complete mind switch, as a driver, as a team principal, as an engineer… everything.

We have to understand that Formula E and the reason we are in it is because it is different.

First of all it’s all electric, second it’s in city centres, it’s on roads that you can’t predict. We don’t know what it will be like when we go back to Paris every year because that’s down to the Paris council, it’s not down to us. It’s got nothing to do with the motorsport that we know.

It is also a formula where they adapt the rules to ensure that teams don’t run away with the championship, to make sure that it is entertainment. I would say that where normally, historically, we are sport first, entertainment second. We are now entertainment and sport on the same level.

And then you come to places like Tempelhof and you’ve got the E-Village for the fans over there and Nico Rosberg’s Green Tech Festival and they are very willing to try new things.

It’s a bit like a start-up, which it is actually, everybody’s in it together and we want it to succeed, and we are enjoying it because it is fresh and new and has a new energy about it.

SPEEDCAFE.COM: Do you think there should be a leg of the championship in Australia?

McNISH: Absolutely. There have been some discussions, but nothing has happened yet. But the championship is five years old, we have to grow it at a gentle rate and we can’t explode in every direction immediately. But you do eventually have to go to every corner of the globe and Australia is motorsport friendly, should we say, and also we know you can put on a fantastic show.

It fits with everything that the Championship is all about. At the moment it is not on the calendar but I’m very sure at some point in the close future it is going to be, and when it is it will be fantastic.

SPEEDCAFE.COM: Next year sees the big four German manufacturers all involved in Formula E. Why are they so keen to take part?

McNISH: I think there are a couple of points. The big four German manufacturers are looking at electrification as a big part of their road car strategy. Motorsport, and I speak for Audi here, is at the front edge of what this is in terms of technology development but also in terms of telling the public what we are doing. And there is no better way to do it because if you think of electric cars the vast majority are going to be in and around cities, so there is no better way than to take your product to the customer instead of asking the customer to come to the product.

Formula E is a city-based series, it goes around major cities in the world telling its story and at the same time, clearly it links into a different racing plan, a new generation racing plan. I’ll give you an example; you have Aussie V8s, big thundering Aussie V8s, and I’m sure your average V8 fan who has followed it for 20 years will come to our series and say they can’t get the passion for it because it lacks the noise.

I understand that, I come from V8 and V12 Formula One times but at the same time I’ve got a fourteen-year-old boy. Last year we were out cycling and there was this Tesla accelerate away from us up the hill and my son said ‘did you hear that?’ I said ‘hear what, what are you talking about?’ He said, ‘that noise is brilliant!’ It made me think, for an Aussie V8 fan, or for me, our fan level when we went to a race was that thunderous noise, but for him and his friends at that age, that’s their noise, it’s their benchmark, it’s what they grab on to.

So are we trying to bring in new fans of that age or are we trying to convert others? We are bringing in new fans, and this is where it sits apart. It is not aiming at your traditional race fan, it’s actually aiming at a whole new market and I think that is excellent for us at Audi, but I also think it is excellent for the sport because motorsport has got to stay relevant, both from the technology side and for the fans.

SPEEDCAFE.COM: Does it help the manufacturers that everything is controlled, and costs are little lower?

McNISH: Yes, no question. It is very much a focus on electric drive train technology. If they opened up the rules I think it would benefit us at Audi significantly, but I think it would mean the championship was less attractive overall. Therefore we actively support and promote the use of common parts because it has got a lot of benefits. For example, how it focusses our attention on the electric drive train it means that to Michelin as well, because they focus on the energy conservation of the tyres, reducing the rolling resistance of the tyres. It’s all in the same mentality.

The facts of life are the big budget costs of yesteryear are exactly that, yesteryear, and we have to be living in a relevant world today. It’s the same for you at home, for every government, every situation, and this is right for now.

SPEEDCAFE.COM: Michelin admits that all the data they get from this series goes back into development of the tyres for road cars, is that the same for Audi?

McNISH: Motorsport always has. It’s not necessarily the exact part, so the electric motor out of our Formula-E car doesn’t go into the Audi E-Tron road car, however a lot of it is the philosophy. I’ll give you an example: one of the big things about electric cars that we are working on is energy recuperation. So here we were looking at about 35% energy recuperation over the course of a race. So we have 52 kilowatt hours in the battery, we need 35% more to do the speeds. Now that is a big factor with road cars because it gives you range, it can give us performance, but it gives you range. The more we can push these directions in hardware, but also software and methodology and how we are doing it, that can transfer across.

If you take that particular point, we can recuperate energy by lifting off the throttle, by pressing the brake, and also do it on a steering wheel paddle the driver controls. Guess what the E-Tron’s got? Exactly the same type of control systems.

The other thing is weight, because if you’re carrying extra weight around that is energy needed to move it, so we need it to be as light as possible. We reduced 10% weight from our electric drivetrain from last year, so how did we do that? It’s not just shaving bits off because we still need reliability, strength and capability, and the crash test if you like. So all of our weight saving is the ultra-technology that was done during our Le Mans program and also done in conjunction with our technical development for the road car.

SPEEDCAFE.COM: Do you think other motorsport categories can learn from Formula E?

McNISH: I think you have to know you’re DNA. The DNA of Formula E is quite clear; it is in cities, it is short races, it is more of a balance of entertainment and motorsport, and it is looking at a different audience. WEC has got the traditional history of Le Mans, you can’t forget that, you can’t forget Mount Panorama in Australia.

I think everyone can learn from each other and new ideas are always good. I don’t think everything that works here would work at Le Mans or in Formula One, but some areas can. Everyone has to be open to look at the new ideas and know your target and your DNA, which is probably where Formula One is finding it a bit tough right now.