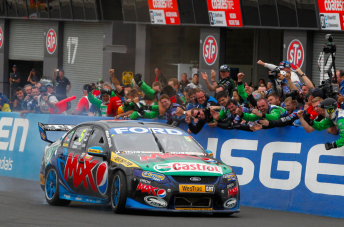 Tickford is selling its 2013 Bathurst winner

Tickford is selling off the car with which Mark Winterbottom and Steve Richards won the 2013 Supercheap Auto Bathurst 1000.

The Ford FG Falcon, chassis 1214, will come complete with race-ready engine once it’s undergone a complete restoration to its Bathurst winning state.

It will also come with all supporting paperwork, set-up sheets and driver notes, CAMS log book, and dossier of the car’s racing history.

In addition to the car itself, the purchaser will receive a 10 lap drive/ride experience at Winton, along with other bonuses from the team.

FPR 1214 was the fifth Car of the Future chassis logged with Supercars, and saw action from 2013 to 2015 in the hands of Mark Winterbottom, David Reynolds, and their respective Pirtek Enduro Cup co-drivers.

It was also tested by Chaz Mostert and Will Davison, and has since become a race winner in the Super2 series.

It’s most notable result however was victory in the 2013 Supercheap Auto Bathurst 1000, when Winterbottom and Richards won by just half a second over the Red Bull entry of Jamie Whincup and Paul Dumbrell.