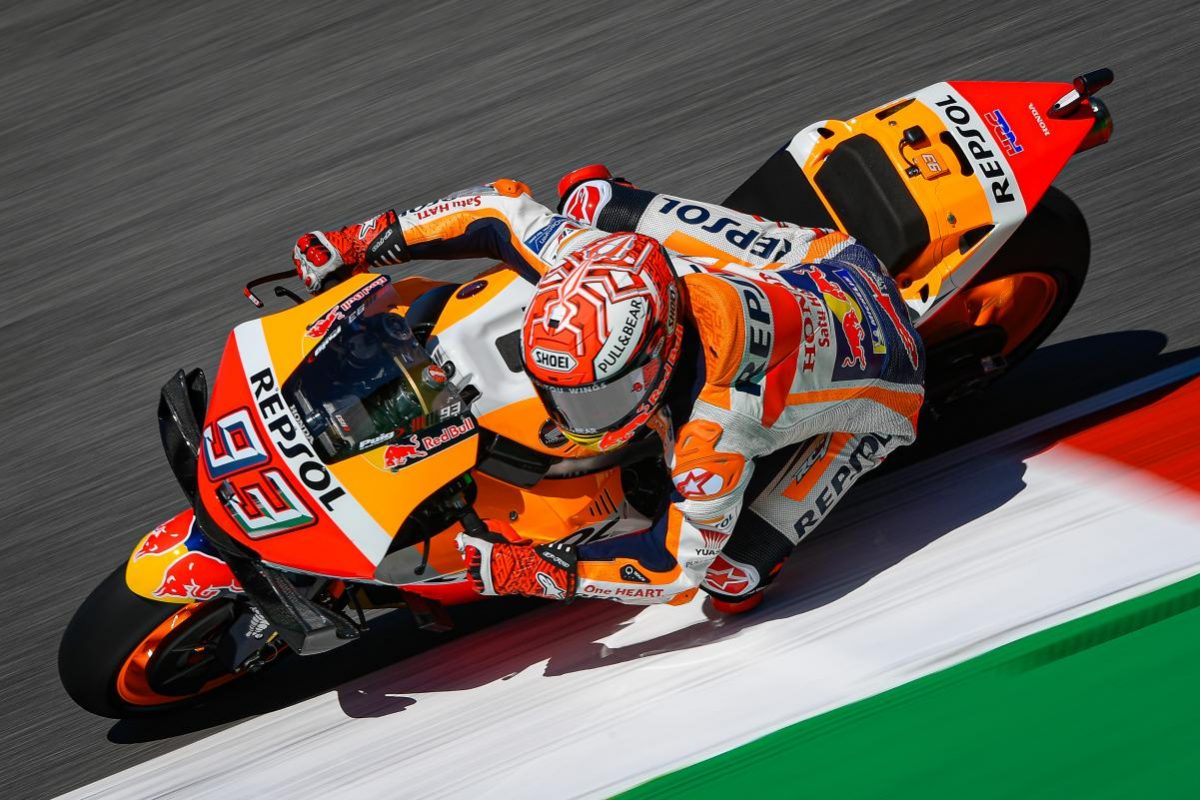 Marc Marquez has denied Fabio Quartararo pole position for the Italian MotoGP after being towed up Mugello’s main straight by Andrea Dovizioso at the end of qualifying.

Marquez set a new all-time lap record of 1:45.519s on his Repsol Honda to knock Quartararo out of first position and the rookie fell 0.214s short despite improving himself as he took the chequered flag seconds later.

Danilo Petrucci is the first of the three factory Mission Winnow Ducatis in the final front row berth, ahead of the second Petronas SRT Yamaha of Franco Morbidelli and Jack Miller on the lead Pramac Ducati.

Petrucci had reset the all-time lap record to 1:46.056s in topping Free Practice 3 but Quartararo bettered that with a 1:45.992s on his first flyer in qualifying and finished his first run with a 1:45.845s.

Marquez was third after the first runs, behind the Yamahas of Quartararo and Maverick Viñales, despite squeezing past Dovizioso (Mission Winnow Ducati) at Palagio on the faster of his first two hot laps.

There was no improvement for the championship leader at the start of his second run and he was eighth by the time he started what would be his final lap.

On that occasion, Dovizioso helped Marquez by providing a slipstream up the hill to the control line and a fourth pole of the season.

Quartararo could not repeat his Jerez heroics but did bag a second front row start of his premier class career, while Petrucci continued to show the way for the Bologna factory at another 0.148s off the pace.

Miller got as high as second during Qualifying 2 but had a slow run through Sector 3 and ended up fifth, between Morbidelli and Cal Crutchlow (Castrol LCR Honda).

Viñales could find no improvement on his second run and the #12 Monster Energy Yamaha was shuffled back to seventh, where he will start alongside Francesco Bagnaia (Pramac Ducati) and Dovizioso.

Despite setting a new MotoGP speed record of 356.7km/h in FP3, Dovizioso went into Q1.

He was fastest in that 15-minute hit-out, but it was probably a less comfortable progression he would have liked given that he messed up the first lap of his second run while sitting third.

Takaaki Nakagami (Idemitsu LCR Honda) rounded out the top 10 while Pol Espargaro couldn’t match his combined FP1/FP2/FP3 result of second and sits in the middle of the fourth row on the Red Bull KTM Factory Racing entry.

Ducati test rider Michele Pirro was only 0.005s slower than Dovizioso in Q1 and rounds out Row 4 on the grid.

Also in Q1, Alex Rins (Suzuki Ecstar) and Valentino Rossi (Monster Energy Yamaha) appeared to mistime their final runs and gave themselves no chance of improving at the death on starting positions of 13th and 18th respectively.

Repsol Honda’s Jorge Lorenzo only managed one position better than former team-mate Rossi for the start of the 23-lap race on Sunday night at 2200 AEST.