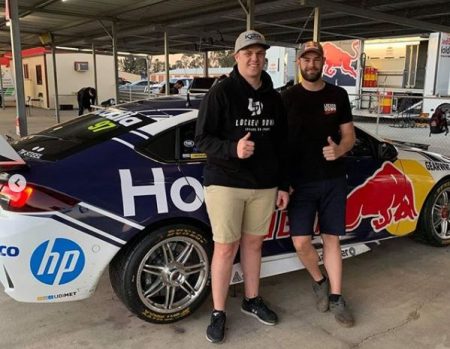 Brodie Kostecki labelled an opportunity to impress Supercars powerhouse outfit Triple Eight as ‘a day he will never forget’ in his fledgling career.

Kostecki, cousin of Triple Eight Super2 driver Kurt Kostecki, is currently fourth in the Super2 standings having scored a win at the Adelaide season opener.

Van Gisbergen was on hand to complete 10 laps as permitted by Supercars regulations.

Kostecki relished the chance to impress in top level machinery and learn from 2016 champion van Gisbergen.

“I was just grateful for the opportunity to have my name on the door and even though it was only for a day, it was pretty cool,” Kostecki told Speedcafe.com.

“It will definitely be something I will never forget.

“I was sharing the car with Jazeman; we did quite a few laps throughout the day so it was good to maximise the day as much as we did. 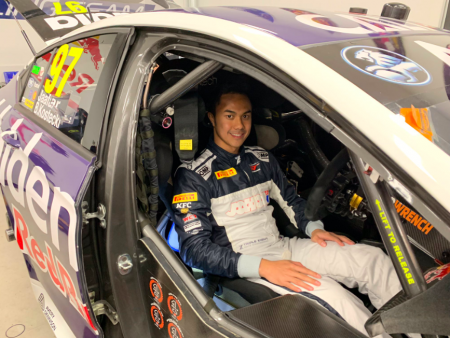 “We started right on the dot at 8:30 and went right through to the end of the day.

“It was great to have the opportunity to have a go.

“Shane got to jump in the car for a few laps so I got the chance to compare myself to him and that showed the areas I really need to work on myself.

“It was good to do that and hopefully I can polish up a few of those areas and lift my game.”

Triple Eight team manager Mark Dutton was impressed with how both Kostecki and Jaafar acquitted themselves on the day.

“We were very happy with the evaluation day we had yesterday,” said Dutton.

“QR put on a great day for our session as we had consistent temperatures and a well prepared track which enabled us to maximise our track time.

“Brodie did the lion’s share of the day and drove above our expectations.

“His feedback and consistency throughout the whole day was impressive and the insightful feedback provided to him was well ahead of his years.

“As for Jazeman, it was his first time behind the wheel of a Supercar but straight out of the pits on the first lap he was driving the car as if he was a regular; smooth and consistent.

“Throughout the day, as Jazeman began to push harder and drove more laps he did experience some of the differences between the Supercar and GT series car. Overall, he did a great job and enjoyed the experience.”

Kostecki believes the test will help him improve his own skills which he can put to use in the Super2 series for the remainder of the year.

“I think I can use this experience to improve our team in some areas and I learnt a lot myself,” he added.

“Coming away from it there are a lot of things I can do better.”

Kostecki will jump aboard his Super2 Kostecki Brothers Racing VF Commodore for Round 3 at the Watpac Townsville 400 from July 5-7.