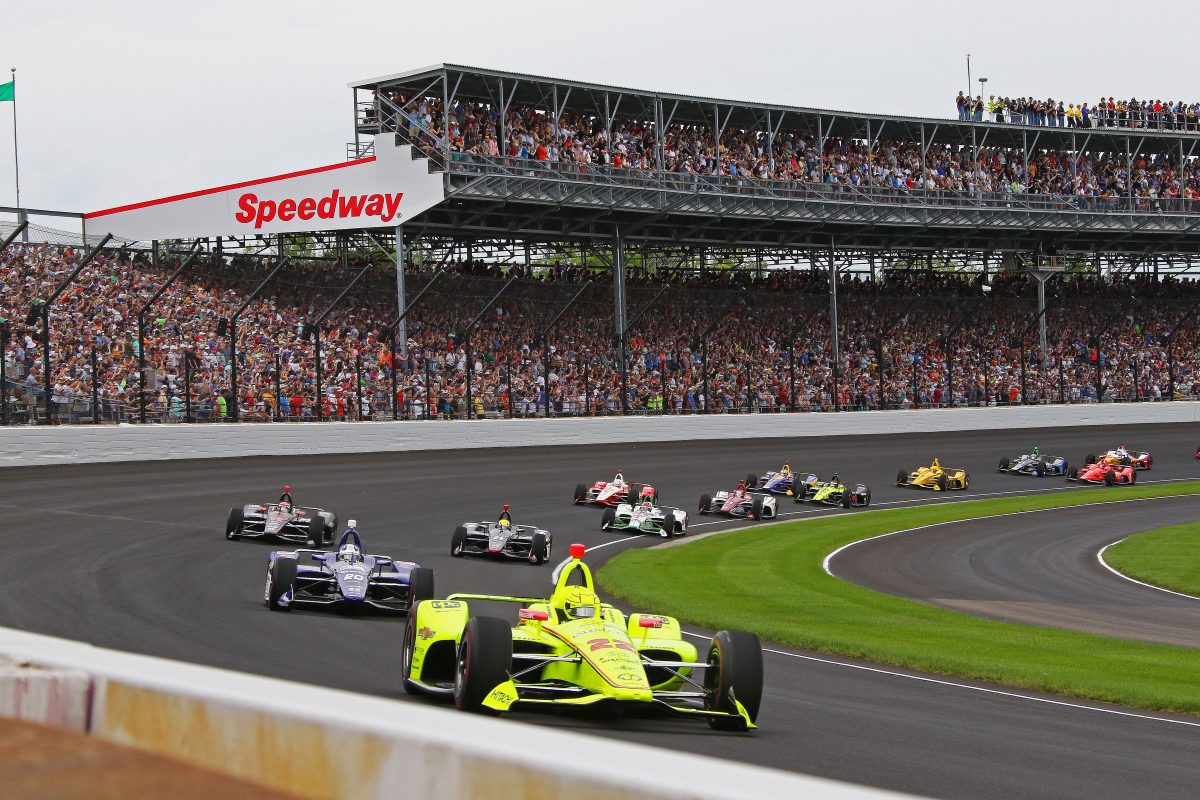 Simon Pagenaud has triumphed in a 13-lap shootout over Alexander Rossi to claim victory in the 103rd running of the Indianapolis 500.

Pagenaud took the lead for the final time on the penultimate lap and crossed the line 0.209s before Rossi for his first Indianapolis triumph.

He duplicated his Team Penske team-mate Will Power’s 2018 achievement by sweeping both Month of May races at Indianapolis.

There were three previous winners in the top five, namely also Takuma Sato in third and Power in fifth.

Josef Newgarden split those two while Australian James Davison was 12th in an Indy-only #33 Belardi Honda and Scott Dixon a few spots further back.

For Pagenaud, the 2016 IndyCar Series champion, it was his first Indianapolis 500 victory and a record-extending 18th for team owner Roger Penske.

“It’s hard to believe right now, to be honest with you,” Pagenaud said in Victory Lane.

“The car was just on rails and the yellows came out perfectly.

Pagenaud maintained the lead from pole position and stayed at the front through the first stint, which was briefly interrupted when Colton Herta’s #88 Harding Steinbrenner Racing Honda coasted to a stop with a gearbox problem.

The Frenchman was the first to pit on Lap 32, starting a trend that would continue throughout the afternoon.

Running out front while pulling along the pack in the draft consumed more fuel, and Pagenaud consistently ran two to five fewer laps on a tank of ethanol than his competition.

Power moved up from eighth on the grid and ran second to his Penske team-mate in the first quarter of the race, but he brushed a crewman with his car during the second pit stop of the afternoon.

On Lap 74, the Caution flew as Kyle Kaiser’s dramatic month came to an end when he lightly crashed the #32 Juncos Racing Chevrolet in Turn 4.

Power had to slow dramatically to avoid Kaiser’s spinning car, and during the ensuing full course Caution, the Queenslander was ordered to the rear of the lead lap (21st place) as a penalty for his earlier pit stop error.

By the third round of pit stops, Ganassi Racing’s Dixon had stretched out a 12-lap advantage over Pagenaud in fuel consumption.

But Dixon’s strategy went awry when the caution flew on Lap 139 after Marcus Ericsson spun his #7 Schmidt Peterson Honda at the pit entry.

The race then truly commenced with the Lap 148 restart as Pagenaud led his Penske team-mate Newgarden.

Rossi’s #27 Andretti Autosport Honda appeared to be the fastest car on the track, but he was badly blocked by the #77 Honda driven by Oriol Servia.

Rossi furiously shook his fist at the Spaniard when he finally got past, and the fired-up American resumed the chase.

On the 151st lap, Newgarden overtook Pagenaud in what was the first on-track pass for the lead of the afternoon.

Pagenaud then kicked off the final round of pit stops on Lap 168, with Newgarden stopping three laps later.

The two Penske Chevrolets led Ed Carpenter and a rapidly closing Rossi who, fuelled by red mist, worked his way up to second by Lap 177.

Rahal was angry at Bourdais, but none of the drivers were seriously injured, though Veach sustained a bruised knee.

After a 20-minute delay and several laps run behind the Chevrolet Corvette Pace Car, the restart came with 13 laps remaining and Rossi leading Pagenaud, Carpenter, Newgarden, and Sato, who had bounced back from falling to 31st place after a bad pit stop.

Pagenaud passed Rossi for the lead into Turn 1 on the Lap 188 restart.

Rossi returned the favour a lap later, but Pagenaud again assumed the lead at the start of Lap 190.

On the 191st lap, Sato passed Newgarden for third place and the top three pulled out a small gap over the American.

Pagenaud began aggressively weaving on the straights to keep Rossi behind, then protected the inside on the entry to Turns 1 and 3.

With five laps to go, Pagenaud and Rossi separated themselves from Sato and the rest.

Rossi got a great run, and he pulled level with the Frenchman as they crossed the line to start the 197th lap and grabbed the lead into Turn 1.

Pagenaud’s Chevrolet then powered past Rossi’s Honda on the back stretch on the 199th lap.

Weaving down the back stretch, the bright yellow #22 Penske entry held off his rival into Turn 3 and maintained a small gap to the chequered flag.

His margin of victory over Rossi was 0.209s, with Sato 0.132s further back in third and Newgarden a little more than half a second behind the Japanese driver.

Pagenaud’s car ran dry on the cool down lap and he stopped his car on the ‘Yard of Bricks’ that marks the start/finish line.

“I guess that’s not a very conventional way to end and I apologise to the fans for keeping them waiting,” said the new champion.

Rossi was crushed to not add a second Indianapolis trophy to his case.

The Californian, who won as a rookie in 2016, said Pagenaud just had too much Chevrolet horsepower in the end.

“They did a great job, and obviously he was on pole and led the most laps,” Rossi commented.

“I think we had a superior car, we just didn’t have enough there at the end.

“It’s still a great result and I’m proud of my guys. They did a great job all month.

“Unfortunately, nothing else matters here but winning.”

Pagenaud leads the series by a point, with Newgarden second, ahead of the Detroit double-header on May 31-June 2.