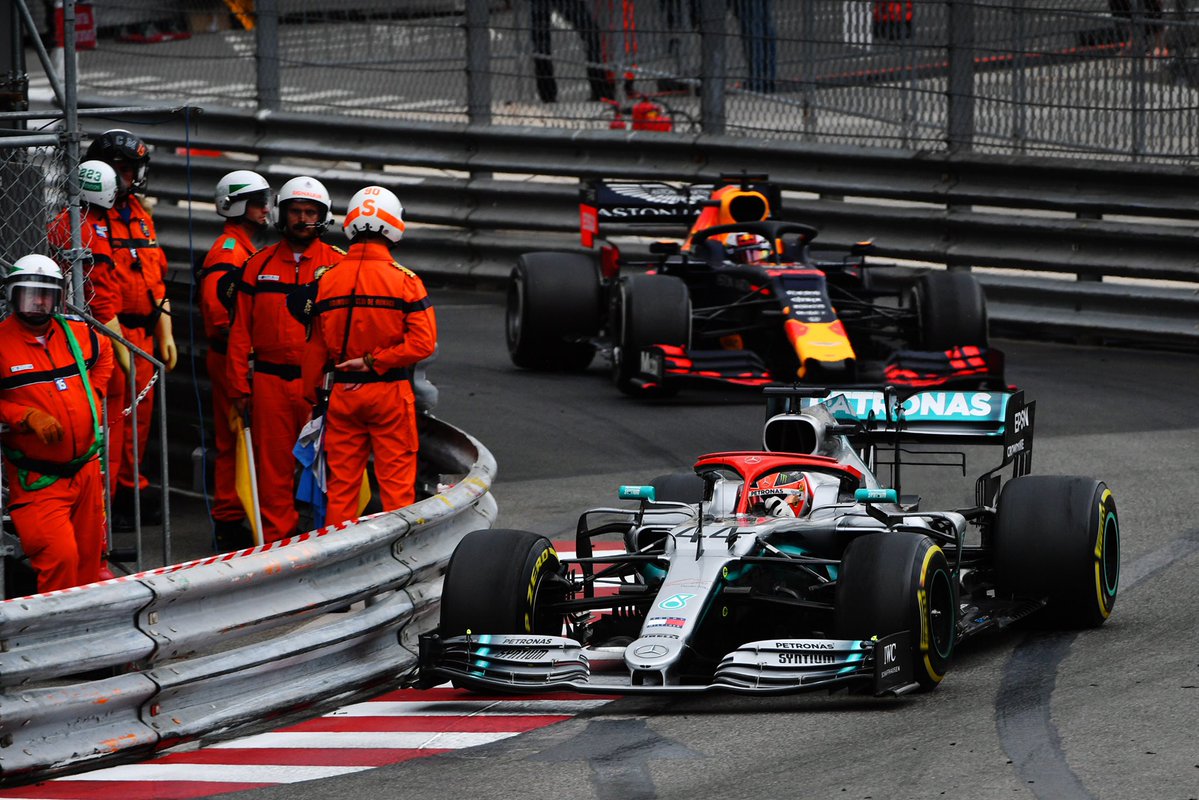 The Mercedes driver struggled for the latter 67 laps on medium compound tyres but survived even when Verstappen made a big lunge at the Nouvelle Chicane on the third-last lap.

Failure to pull off the move was especially costly for Verstappen, who had incurred a five-second time penalty and needed to clear the Mercedes to simply stay on the podium.

Nevertheless, Sebastian Vettel at least broke the Silver Arrows’ run of one-two finishes to start the season, with Valtteri Bottas third in the second Mercedes.

Verstappen, also who played a critical role in splitting up the Mercedes, was officially fourth, a position ahead of Red Bull Racing team-mate Pierre Gasly.

Daniel Ricciardo ran as high as fifth but got dropped into the pack when he was pitted under the only Safety Car of the race and ultimately finished ninth.

Hamilton converted pole into the early lead when the lights went out, while Bottas managed to sweep around Verstappen and hold second after the Dutchman threatened to take it off him at Sainte Devote.

Vettel retained fourth while Ricciardo managed to hang in fifth position on the outside line and start the run up the hill ahead of fellow third row starter Kevin Magnussen (Haas).

The two Mercedes pulled away early on but Ricciardo was an obvious cork in the bottle and by the time Vettel set the then-fastest lap on Lap 7, almost 17 seconds separated the #5 Ferrari from the #3 Renault.

Charles Leclerc was on a charge from 15th on the grid in the second Scuderia Ferrari entry but it would soon end in tears for the home town driver.

He gained a position at the start and pulled off a move on Lando Norris (McLaren) at the Loews Hairpin on Lap 2, before a high-risk lunge past Romain Grosjean at Rascasse on Lap 7.

While Leclerc got away with a light touch with the Haas on that occasion, he tagged the inside fence when going for a repeat on Renault’s Nico Hulkenberg next time around and half-spun.

The moment not only allowed Grosjean back ahead, it also punctured Car #16’s right-rear tyre, which quickly unravelled itself and tore bits out of the floor of the SF90.

Hulkenberg pitted in response at the end of Lap 10, switching from the medium compound tyres on which he started to a set of hards, before a Safety Car was called for the debris left by Leclerc.

The top six were called into pit lane, with Bottas slow on the way there to avoid a stack in the Mercedes box.

However, that made Bottas vulnerable to Verstappen and Red Bull Racing sent Car #33 into side of the Mercedes as he re-entered the fast lane and stole second position.

Bottas was called straight back into the pits with what the team reported as a right-front puncture and rim damage due to being pushed into the pit wall, and the Finn dropped to fourth.

Like Verstappen and Vettel, he was by then on hard tyres while Hamilton had been switched onto mediums.

Ricciardo and Magnussen were also on mediums in 13th and 14th respectively under the Safety Car, after the first 10 on the grid had started on the softest compound in the season range.

The race restarted on Lap 15 and by the time the front-runners had completed another tour under green, Antonio Giovinazzi (Alfa Romeo) tagged Robert Kubica’s Williams at Rascasse, causing a traffic jam for the backmarkers.

Among them was Leclerc, who pitted for another set of tyres on Lap 16 but relented a lap later and would be the sole retirement of the afternoon.

At the head of the field, Hamilton was soon struggling on his mediums and was holding up Verstappen, Vettel, and Bottas.

Verstappen was soon handed a five-second time penalty for an unsafe release, but continued to circulate at a handful of tenths of a second back from the #44 Mercedes.

The next two started to drift and at the halfway mark of the 78-lap journey, Vettel and Bottas were each about a second-and-a-half behind the preceding car.

Meanwhile, Ricciardo and Magnussen remained mired outside the top 10, stuck behind Kimi Raikkonen as the Alfa Romeo driver ran extremely long for someone who also started on soft compound tyres.

Those who had been around Ricciardo and Magnussen when the race got underway, meanwhile, had managed to take their pit stops and remain inside the top 10.

Ricciardo was finally released when Raikkonen pitted at the end of Lap 45, just as the leaders came up on the six-car train that the 2007 world champion had caused.

The race then settled into something of a holding pattern, with Verstappen hanging about half to three quarters of a second back from Hamilton, who became increasingly concerned about the life in his tyres.

At one stage, with more than 20 laps to go, he even told engineer Pete Bonnington that “You need to hope for a miracle,” but still the Brit was told to persevere.

Ricciardo was finally back into the top 10 when Norris took his pit stop and popped out behind the West Australian, while Gasly had enough of a margin on Carlos Sainz (McLaren) to get back onto soft compound tyres and have a crack at the fastest lap point with a free pit stop on Lap 62.

Bottas clocked the fastest lap on Lap 65, making up for a recent delay in lapped traffic to get back within five seconds of Verstappen, who still had the time penalty to be taken or added.

Gasly took the fastest lap off the #77 Mercedes driver on Lap 66, as Verstappen continued to stalk #44 and was told to up his power mode.

Hamilton sarcastically remarked “That’s great news” when he was notified of the Dutchman’s instructions, then had to mid-track his W10 at Loews on Lap 70 to stay ahead.

Verstappen straightlined the exit from the Swimming Pool complex on Lap 71 and gave Hamilton a reprieve, but it lasted barely half a lap.

The Red Bull man continued to apply the blowtorch and tried to send Car #33 down the inside of Hamilton at the Nouvelle Chicane on Lap 76, only to lock his brakes and touch the Mercedes.

Hamilton opened his steering and all but straight-lined the chicane, while Verstappen also cut the corner despite something of an attempt to make it.

That was the end of the story on the track, although stewards put the incident under investigation.

Half a second separated Hamilton and Verstappen when they took the chequered flag but the official winning margin from winner to runner-up Vettel was 2.602s, with Bottas 0.560s further behind.

“That was definitely the hardest race I’ve had,” he said.

“I really was fighting with the spirit of Niki. I know he’ll be looking down, I was just trying to make him proud. We truly miss him.”

Sainz took sixth, ahead of the Toro Rossos of Daniil Kvyat and Alexander Albon respectively.

Ricciardo was a somewhat surprising ninth due to a five-second penalty for Grosjean, who cut the pit exit line, which initially looked to be of no concern to the Frenchman.

Grosjean rounded out the top 10, Norris was last on the lead lap in 11th, and Hulkenberg was a lap down in 14th.

Verstappen provisionally remains fourth, and Gasly finished with the fastest lap, while Hamilton is now 17 points ahead of Bottas at the top of the drivers’ championship.

Ricciardo moves to eight points with his second top 10 of the campaign.

The next round is the Canadian Grand Prix on June 7-9.