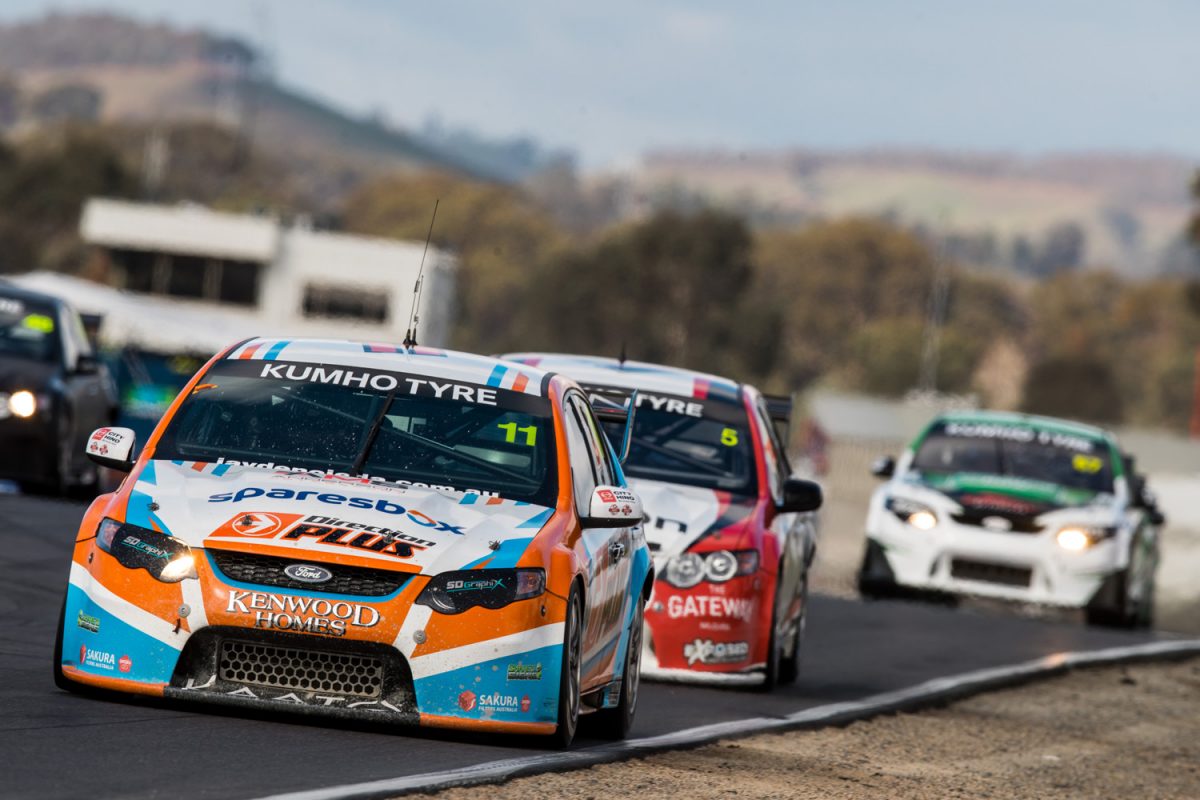 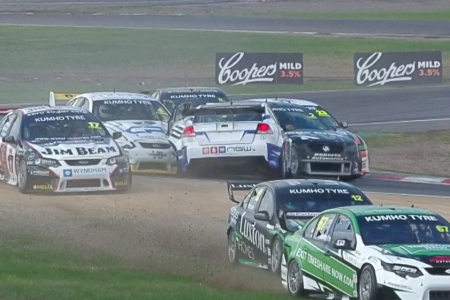 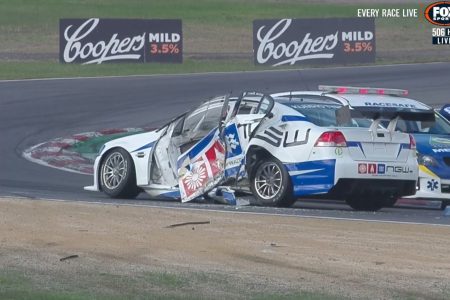 Josh Fife spun at Turn 1 and was T-boned by Tony Auddino (#4 BF Falcon), although thankfully it was the passenger side of the former’s Brad Jones Racing VE II Commodore which wore the impact and the rookie could walk away from the scene.

Fife had been trying to pinch third position from Hamish Ribarits on the outside line but Ribarits appeared unaware and bumped Car #14 over the edge of the race track, causing the spin.

Best led his MW Motorsport team-mates Nic Carroll (#48 FG Falcon) and Ribarits (#5 FG Falcon) under Safety Car, with Ojeda (#11 Anderson Motorsport FG Falcon) fourth, and the top two each put a slick move on the other in the laps shortly after the restart.

Ribarits then got Carroll at Turn 11 on Lap 5, and took the lead as the driveline in Best’s #78 FG Falcon gave up on Lap 9.

Another Safety Car was required, before a restart which accounted for Carroll and Jon McCorkindale (#69 Mac Motorsport FG Falcon) when they came together as a consequence of a dive from Matt McLean (#12 Image Racing FG Falcon) at Turn 1.

Ribarits pinched a brake at Turn 11 and opened the door for Ojeda, who had already capitalised on a Carroll error, on the penultimate lap.

His second placing, a spot ahead of a strong-finishing Broc Feeney (#67 Paul Morris Motorsport FG Falcon), was still good enough for him to take the series lead.

Round 3 supports the Century Batteries Ipswich SuperSprint on July 26-28 at Queensland Raceway. 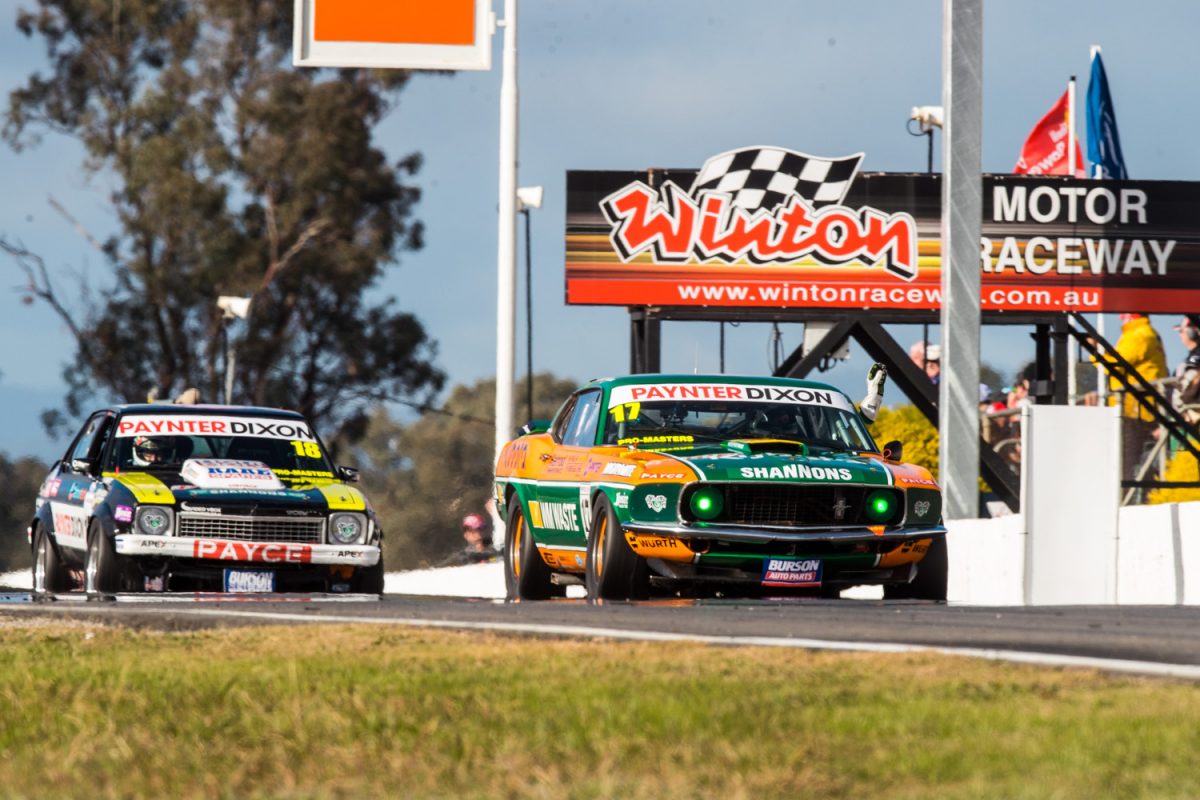 Johnson (Ford Mustang) led away at the start of Race 2 as John Bowe (Holden Torana) dropped in behind Ryan Hansford (Torana) for third place.

Bowe dragged up behind Hansford as the pair battled over second and had a look at Turn 10 before Hansford shut the door.

Hansford ended up off the road on Lap 10 at Turn 9, with Adam Garwood (Camaro) latching onto the back of Bowe but unable to make a move before the chequered flag.

At the start of Race 3, Johnson consolidated his position while Bowe had to cover off Garwood.

Hansford and Zukanovic were engaged in a battle for fifth, running side-by-side on the run down to Turn 11 but Hansford went wide and dropped to eighth.

Zukanovic ran wide a lap later on his own and the pair began battling once again.

Victory went to Johnson by under a second in front of Bowe, Garwood and Pollicina. 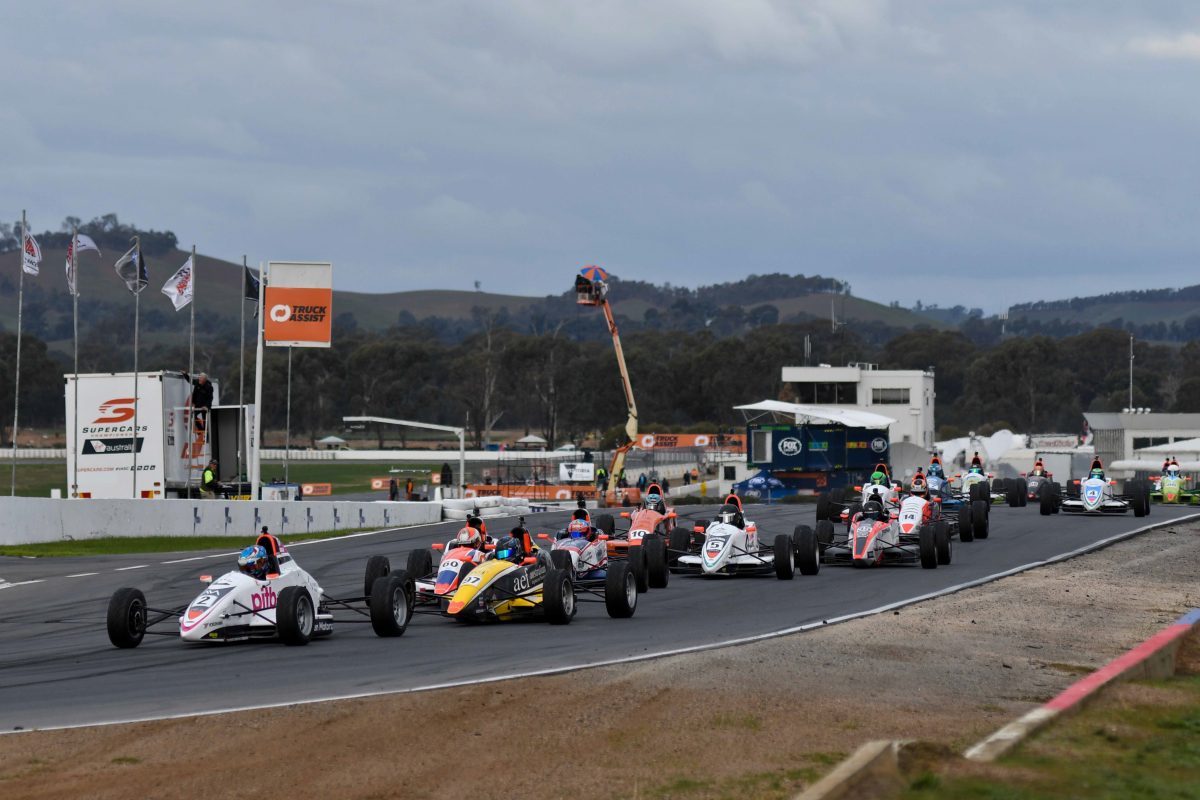 Angelo Mouzouris completed a sweep of Round 3 of Australian Formula Ford with two more race wins.

In Race 2, Mouzouris went nowhere at the start on a patchy wet surface, while Liam McLellan shot into the lead before the Safety Car came out to recover a car stuck on the grid.

Thomas Sargent pinched the lead on the restart, however Callum Hedge took over the lead on Lap 4 with a pass at Turn 11.

Mouzouris ended up with the win from McLellan and Cody Donald after Hedge, Sargent and Jay Hanson were all slapped with time penalties for restart infringements.

In Race 3, Mouzouris beat Hedge by a tenth of a second after a last-lap dash for the victory following a Safety Car.

The round winner now also leads the series on the way to The Bend on June 21-23.