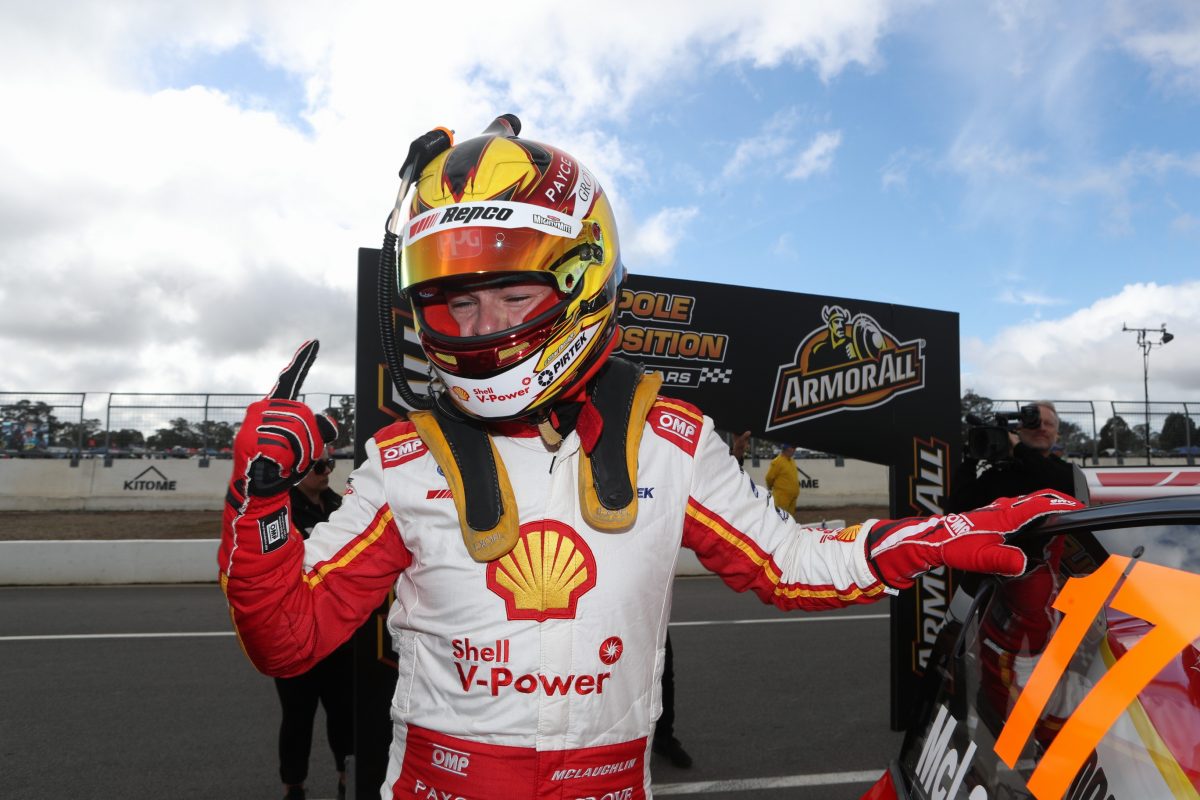 Scott McLaughlin has qualified on Armor All Pole Position for Race 14 at the Truck Assist Winton SuperSprint with a new practice record.

The championship leader laid down a 1:18.5233s on his final hot lap in the #17 Shell V-Power Mustang which stripped almost a quarter of a second from Chaz Mostert’s two-year-old circuit benchmark.

Fabian Coulthard will start on the outside of the front row in the sister #12 Mustang, while Jamie Whincup (#88 Red Bull HRT ZB Commodore) and David Reynolds (#9 Penrite ZB Commodore) are set to take the start from just behind the DJR Team Penske entries.

Shane van Gisbergen, however, is mired down in 13th in the #97 Triple Eight ZB Commodore after he appeared to struggle with tyre phasing throughout the first two parts of the knockout session.

McLaughlin always looked a likely pole-sitter during the two parts of qualifying which he participated in, but his effort was all the more impressive given that it had seemed at one stage that the pace had gone out of Winton Motor Raceway.

He was also 0.5287s faster than his team-mate and 0.5816s faster than the 2017 Virgin Australia Supercars Championship winner, Whincup, and attributed at least some of his performance to cloud cover which arrived before his final run.

“That one was awesome,” beamed McLaughlin.

“I said to the guys I really wanted to go again because I felt like the car had potential for a really good number.

“Proud for the Shell V-Power Racing team to get a front row lockout, me to grab the Armor All Pole, it’s fantastic, thanks for the support and I’m really excited for the race today.

“When the cloud cover came over it got a little bit cooler and then I thought ‘Maybe we might have a shot here’. I got through (Turn) 1 really good and I was like ‘Far out, we’re on here’. I just tried to put as much of it together.

“(I’m) Just really proud, the guys gave me an awesome car, all the time. Just proud to be able to drive this amazing race car.”

Mostert’s performance from Practice 2 earlier in the day went away somewhat and he put the #55 Supercheap Auto Mustang fifth on the grid next to the second Erebus entry of Anton De Pasquale (#99 ZB Commodore).

Holdsworth had reportedly run out of tyres before the final part of qualifying even started, but blazed to a then-fastest first sector when he did enter the race track after the rest had already set a time.

Andre Heimgartner continued his recent tendency to show the way for the Kelly Racing Nissan quartet by qualifying 10th in the #7 Plus Fitness Altima.

Both he and Holdsworth came all the way through the three-part process.

Van Gisbergen was 15th when he started his final lap but could only elevate himself two positions and was still 0.7138s off the pace which McLaughlin had set to that point.

He had in fact already dug himself out of big trouble during the first 10-minute period, having got crossed up at Turn 7 on his first fast lap before moving only to seventh at the end of the first runs.

The 2016 champion was 12th when the chequered flag came out but, with only new tyres and no set-up change, set the fastest first sector and had enough in reserve to be third once all of the laps had been completed in that segment, before reporting “fronts just not working” on his radio.

James Golding was the first to miss out on progressing to Part 2 due to van Gisbergen’s late flyer, leaving the #34 Boost Mobile ZB Commodore 16th on the starting grid.

“It’s really tight… not enough. We made a change, it’s got some characteristics that I like. We’ll tune it up.”

Results: Armor All Qualifying for Race 14