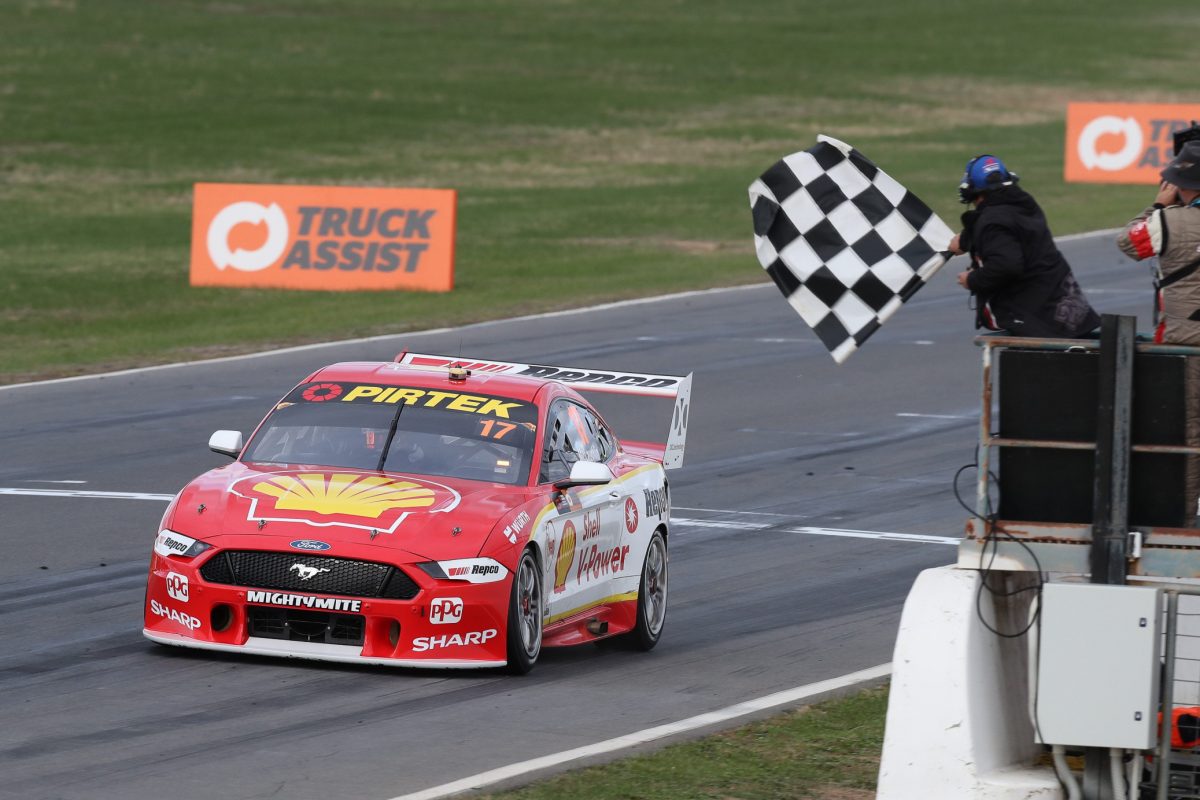 A late Safety Car was not enough to upset a comfortable Scott McLaughlin-led one-two for the Shell V-Power Racing Team in Virgin Australia Supercars Championship Race 14 at Winton.

Were it not for the neutralisation of the race inside the final 10 laps, no one would have got close to McLaughlin, who effectively led all 67 laps, and nor would Fabian Coulthard have faced a challenge for second position.

The two New Zealanders managed the Lap 62 restart well and it was McLaughlin officially by 0.7664s at the chequered flag, while Coulthard gapped the chasing pack with relative ease.

Reynolds had to settle for fourth while Lee Holdsworth (#5 The Bottle-O Mustang) advanced three positions from where he started to be the lead Tickford Racing entry in fifth, his personal best for the year to date.

That was a position which Nick Percat gave up under Safety Car as Brad Jones Racing gambled on throwing another set of tyres at the #8 Honda Motorcycles ZB Commodore., and he only got back to ninth having dropped to 12th with his third pit stop.

“It’s been an amazing weekend; two wins for our team, a pole… it’s fantastic, and a one-two,” said McLaughlin.

“Great job by Fabs to get up there too, the car was just ridiculously good; excited for the future and the rest of the year.”

Coulthard said of his team-mate, “He’s fast, there’s no two ways about it.

“Credit to the #17 guys, they had a fast car today and second place was as good as we could have got.”

The DJR Team Penske duo started well but pole-sitter McLaughlin got the slightly better of it and had the inside line for the first corner anyway.

He led Coulthard, Reynolds (#9 ZB Commodore), a slow-starting Whincup (#88 ZB Commodore), and Chaz Mostert (#55 Supercheap Auto Mustang) until the latter ran off on his own between Turns 6 and 7 and dropped to the very back of the 25-car field.

At the other end of the field, McLaughlin grew his lead beyond a second on Lap 3 and beyond two seconds on Lap 7, but the gap between Coulthard and Reynolds was expanding at an even faster rate.

Aside from Mostert’s twin offs, the opening stages were relatively sedate at the front, with Percat’s Lap 9 move past Cameron Waters (#6 Monster Energy Mustang) for eighth at Turn 4 the first on-track positional change in the top 10 since the standing lap.

Coulthard was the first of the top four to serve his first compulsory pit stop, by which time he was about 3.6s behind McLaughlin after 16 laps.

Once Waters completed the cycle six laps later, those four had shaken out in the same positions, although McLaughlin’s advantage over #12 temporarily dropped below two seconds due to more fuel having been sunk into the #17 Mustang.

Reynolds had to pass Andre Heimgartner (#7 Plus Fitness Altima) and Whincup both Heimgartner and Rick Kelly (#15 Castrol Altima) on the road to be back in third and fourth after both of those Kelly Racing entries were significantly short-filled at their first pit stops.

Percat followed Whincup past #7 around the twisty part of the circuit on Lap 22 to sit fifth in the middle stint.

Whincup kicked off the next pit stop cycle for the front-runners when he peeled off at the end of Lap 33, resuming in 18th position.

His decision lured both Reynolds and Percat into the lane next time around and while the former was able to re-enter the circuit just ahead of #88, he was a sitting duck on cold tyres when they arrived at Turn 3.

McLaughlin was among the last to pit again at the end of Lap 43 and still had enough of a buffer to resume in first position with seven seconds on Coulthard, who pitted seven laps earlier, once his tyres came up to temperature.

They continued to circulate seven to eight seconds apart, with Whincup about another dozen back and Reynolds a little further behind having failed to convert pressure into a pass early in the stint.

That was until a Safety Car was called on Lap 58 due to Will Davison, who was running seventh, having pulled off the road with a transaxle failure in the #23 Milwaukee Mustang.

A handful took another set of tyres for a run to the finish which saw far more action than the first 61 laps, most notably Percat and Mostert.

Three positions separated them at the restart before they converged on Lap 65 and got stuck behind Scott Pye, who hung on for eighth in the #2 Mobil 1 Mega Racing ZB Commodore.

For Mostert, that was arguably a solid salvage job given that he also had to serve a 15-second hold penalty at his second pit stop for nudging James Courtney (#22 Walkinshaw Andretti United ZB Commodore) off at Turn 11 on Lap 26.

Heimgartner finished 11th with his early-race gains having largely been reversed out due to the far longer second fill, Tim Slade (#14 Freightliner ZB Commodore) was 12th, and Courtney ended up 13th.

Chris Pither was 14th in Richie Stanaway’s #33 Boost Mobile ZB Commodore, wildcard Smith got home in 21st, and Mark Winterbottom (#18 Irwin Tools ZB Commodore) was 22nd with a penalty along the way for taking out Simona De Silvestro.

The Swiss driver finished a position further back in the #78 Harvey Norman Altima, while Davison and Rick Kelly were the two DNFs, the latter with engine problems in the #15 Castrol Altima.

The next event is the BetEasy Darwin Triple Crown on June 14-16 at Hidden Valley Raceway.