Mostert on pole for Race 13 at Winton, van Gisbergen 12th 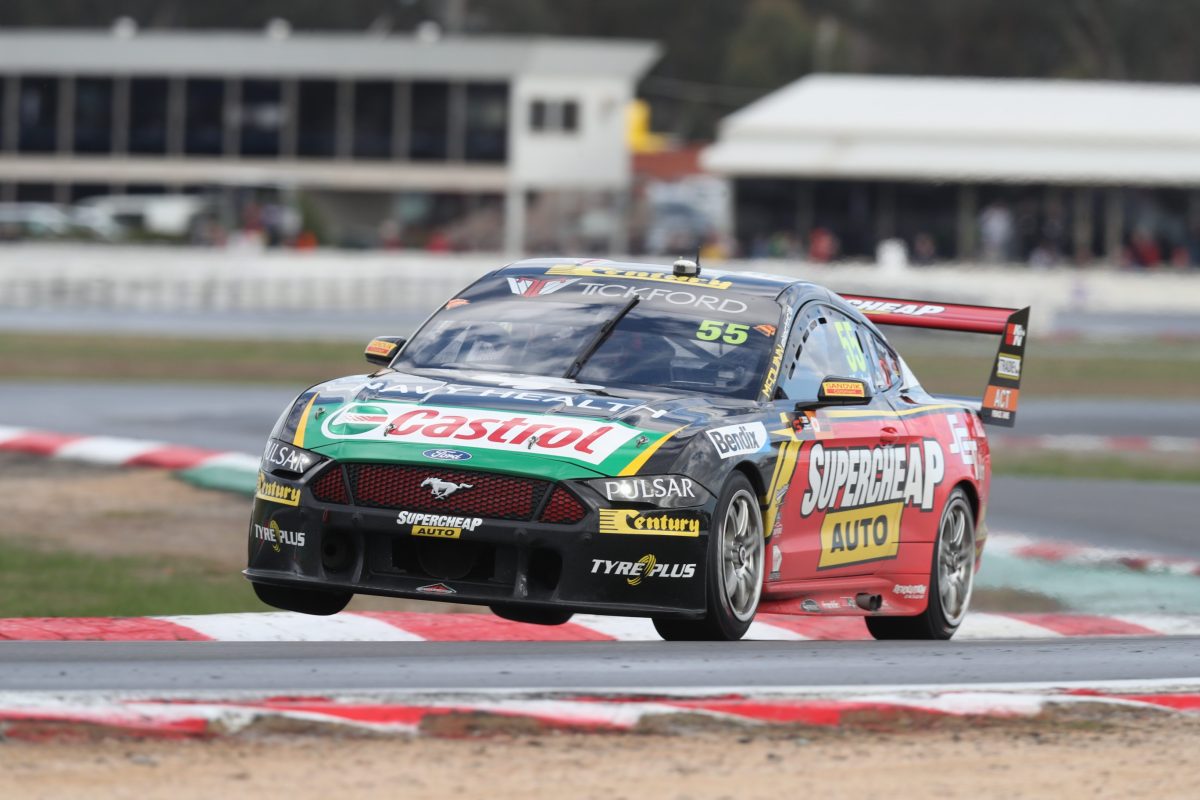 Chaz Mostert has secured Armor All Pole Position for Supercars Championship Race 13 while Shane van Gisbergen managed only 12th in a weather-affected qualifying session at Winton.

Mostert moved the #55 Supercheap Auto Mustang from one side of the front row to the other with the chequered flag out after the conditions mixed up the usual qualifying strategies.

The third part of knockout qualifying saw all drivers start on slicks with a noticeable dry line having formed.

For much of the 10-minute stanza it was the DJR Team Penske duo that vied for top spot, but they faced a dilemma with the track continuing to dry and sunshine breaking through above the rural Victorian circuit after intermittent rain during the morning.

While some took the more standard approach of reverting to the pits to take new rubber, Coulthard and McLaughlin were among those to stay out and cool their tyres before a final crack at a flying lap.

Coulthard, who came all the way from Part 1, was fastest with the chequered flag out, having usurped McLaughlin in the eighth minute and then improved to a 1:20.8919s in the last minute.

McLaughlin was fastest to the first sector on his final lap but slid through Turn 7 and couldn’t improve on his 1:21.3879s.

He had already been bettered by Mostert as well, and the Tickford driver then went and put in a 1:20.6224s at the death on a new set of tyres.

“This is for all the boys and girls at Tickford,” said Mostert after his second pole of 2019.

“It’s been a bit of an up and down year for us. These poles don’t come as soon as they did, like in 2015. We’ll cherish this one, hopefully get it off the line and see what we can do.

“That’s a better question for (engineer Adam) De Borre and not me,” he added regarding timing of flying lap attempts in the conditions.

“I just had to stay on the black stuff, and it’s super tricky here today.”

Rookie Garry Jacobson smashed his previous best Virgin Australia Supercars Championship qualifying effort with an eighth position after sitting out the first few minutes of Part 3 then heading out on new slicks on the #3 Rabble.Club Altima.

Van Gisbergen (#97 Triple Eight ZB Commodore) was off the pace throughout Part 2 of the session and only briefly sat inside the all-important top 10.

While he ended up 12th, Cameron Waters (#6 Monster Energy Mustang) was set to progress before he was knocked out after the chequered flag by Reynolds.

Winterbottom made an early switch to slicks in Part 2 which looked like it may have been a mistake before the track came to him sufficiently.

Will Davison (#23 Milwaukee Mustang) was first on the outside of the five-car cutoff in Part 1, while all four of the Brad Jones Racing entries also failed to progress from that stanza at what is normally a happy hunting ground for the Albury team.

As in Part 2, all cars started on wets before one switched to slicks, but rolling the dice failed to pay dividends for Jack Le Brocq as he remained last in the #19 Truck Assist ZB Commodore.

Results: Armor All Qualifying for Race 13

Next Story Stanaway has injection after neck injury flares up