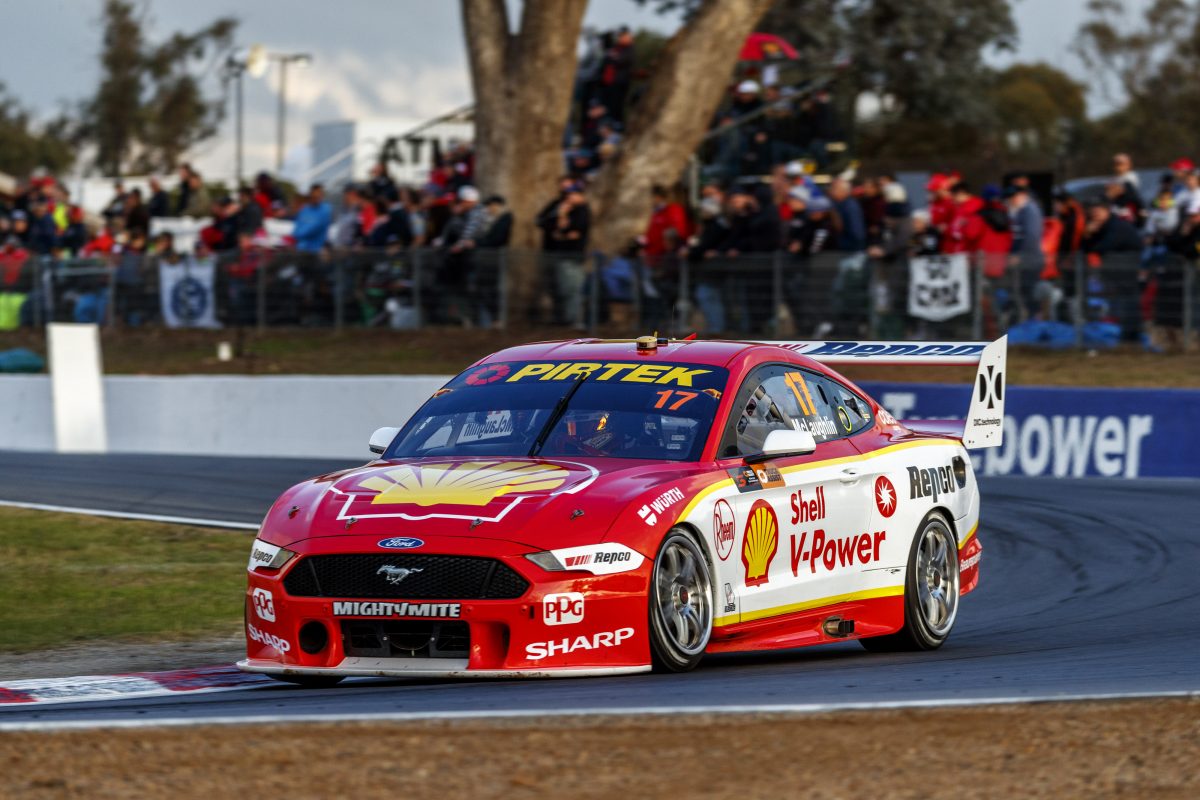 Scott McLaughlin has cited avoiding a possible head-on as the main reason for shortcutting the race track after being tipped off during the first lap of Race 13 at Winton.

McLaughlin was not penalised for running across the infield from Turn 5 to Turn 8 and rejoining in almost the same position as that which he was in when he left the track, and went on to win the race.

He had received a touch from Shell V-Power Racing team-mate Fabian Coulthard as he attempted to enter the Turn 5 sweeper but Coulthard, who also left the circuit, roughly followed the shape of the corner and rejoined at Turn 6.

McLaughlin took a straighter route along the grass and then waited for James Courtney and David Reynolds, the latter of whom was in fact behind the DJR Team Penske Fords at the time of the clash, to go by between Turns 9 and 10 before accelerating again.

“It was full-on,” recounted McLaughlin.

“I got a good start, managed to get to the race line, then everyone sort of got caught up with each other, the seas parted for me basically to Turn 4.

“Then again at (Turn 4 exit), I got up the outside of Fabs and then I got hit off, I went off through the grass, and rejoined where I was.”

An investigation into McLaughlin’s actions ultimately led to no further action being taken over that aspect of the incident.

The championship leader felt vindicated regardless given that he was concerned about facing traffic if he tried to rejoin any earlier.

“It’s a hard question,” began McLaughlin when asked if being allowed to rejoin from such an off at Turn 8, which is understood to have been explained as such in the drivers briefing,  is fair.

“I felt like I had so much momentum going off and one thing for me is the ditches. That was a big problem in this case and then obviously wet grass, slick tyres, so I was going off there at a rate of knots.

“By the time I had gathered it up, I half went left and next thing I know, Courtney and a few others are turning the corner and I wasn’t prepared to go the wrong way so I just went straight through; for my own safety, for everyone else’s safety.

“I wasn’t going the wrong way on the field and I basically said to myself, ‘If I cop a penalty, whatever,’ but it was just one of those things.”

While Tickford Racing team principal Tim Edwards, whose driver Chaz Mostert stood to inherit the victory if McLaughlin was penalised, plans to seek clarification from stewards, McLaughlin did not expect to be penalised.

“Whenever you go off like that and you rejoin, it’s always full on about it, there’s always chatter and whatever.

“I just tried to plead my case over the radio and just explain exactly like I did here (in the press conference). Thankfully they said no further action.”

McLaughlin’s win and Coulthard’s finish of 15th after the latter was penalised for the contact sees the gap between them at the top of the table expand to 232 points.

Next Story DJRTP to 'move on quickly' after McLaughlin-Coulthard clash