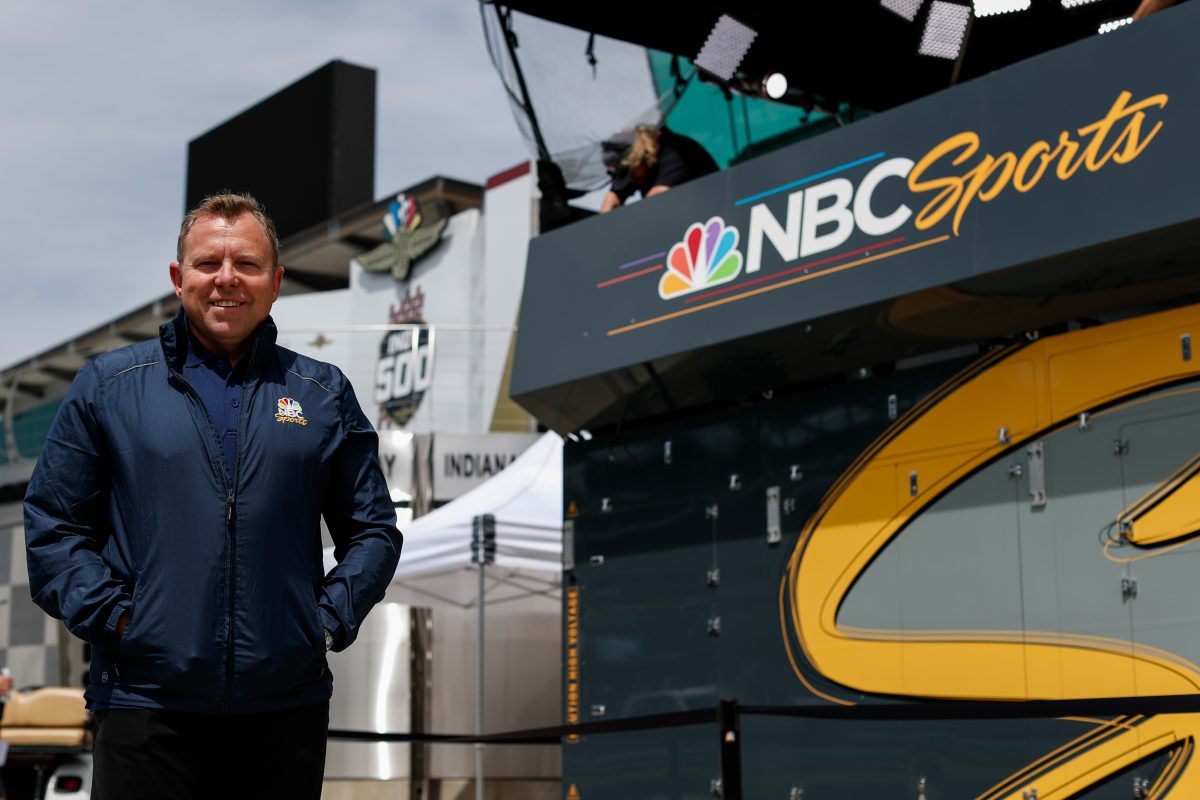 Australian broadcaster Leigh Diffey will realise the highlight of his 23-year commentary career when he becomes the first foreigner to head the broadcast team for the 103rd Indianapolis 500 this weekend.

While David Hobbs and Jackie Stewart provided analysis previously for ABC (American Broadcasting Company), Diffey will be the first international to head the broadcast when NBC televises the event for the first time in its 108-year history.

Regarded as one of Australia’s great motorsport exports, Diffey has shown his diversity through coverage of events such as the Olympics Games and golf’s Masters.

He will also head the NBC broadcast and call games from the Rugby World Cup in Japan later this year.

“This is the highlight of my career for sure,” Diffey told Speedcafe.com during an exclusive chat in the famous Indianapolis Motor Speedway Pagoda.

ABC started coverage of the Indy 500 in 1965 with a week-delay highlights package on Wide World of Sports.

In 1971, the race went to a same-day tape-delay with races being edited to a two- or three-hour package and shown in prime time, before progressing to flag-to-flag live coverage in 1986.

Diffey will be joined in the booth by colour commentators Paul Tracy and Townsend Bell while the roving reporter team will include NASCAR legend Dale Earnhardt Jnr.

Since the inception of live coverage, there have only been six different play-by-play callers, including the legendary Paul Page who had stints from 1988 to 1998 and from 2002 to 2004.

“It’s pretty crazy when you look at names like Paul Page and Sam Posey that are legends at this place,” said Diffey.

“I feel extremely privileged to be in this position and I’m not going to let that go. I will give it and have given it every ounce of respect that it deserves.

“When you get to do your job at a place that is just so steeped in history and where all the greats have performed, it means everything.”

Diffey started calling races on the public address system at the Ipswich Motorcycle Club in the early 1990s and finally got his big break when he was made head commentator for the Australian Super Touring Championship in 1996 after starting as a pit reporter the previous year. Leigh Diffey at the 2011 Gold Coast 600 for Speed Channel, speaking to Ryan Briscoe

He went on to a freelance role with Network 10’s Sports Tonight and decided to quit his full-time job as a Physical Education teacher at Ipswich Grammar School and move to Sydney.

To help supplement his earnings he did everything from labouring jobs to cooking carrot cakes for a café in his neighbourhood using one of aunt’s recipes.

His big break came when Network 10 acquired the V8 Supercars contract in 1997 and he became part of a team that included motorcycling great Barry Sheene, who would held open doors for his next strategic move to London in 2000.

“It was a gut-wrenching decision to leave Australia because I had some good gigs going on, but I made the decision I wanted to be a small fish in a big pond rather than the other way around,” said Diffey.

He went to England with the goal of replacing Murray Walker when he retired from Formula 1 and in the end it came down to James Allen, Ben Edwards, and himself.

After missing out on the job he maintained his role calling World Superbikes and was later hired to cover CART’s two European events in 2001, including Alex Zanardi’s tragic accident in Germany.

Diffey got his next break when some chiefs from Speed Channel heard his call of a Barder Dodge race in Montreal and offered him a full-time gig in 2003.

A decade later Speed was dissolved into Fox Sports and Diffey was snapped up by NBC where he headed up their F1 broadcasts.

Will Power, the 2018 Indianapolis 500 winner, will start from sixth this year and fellow Australian James Davison from 15th, while Kiwi Scott Dixon, the 2008 winner, qualified 18th.

Next Story IndyCar to introduce 'Aeroscreen' cockpit protection in 2020

Previous Story CAFE CHAT: Leigh Diffey on the honour of calling the Indy 500