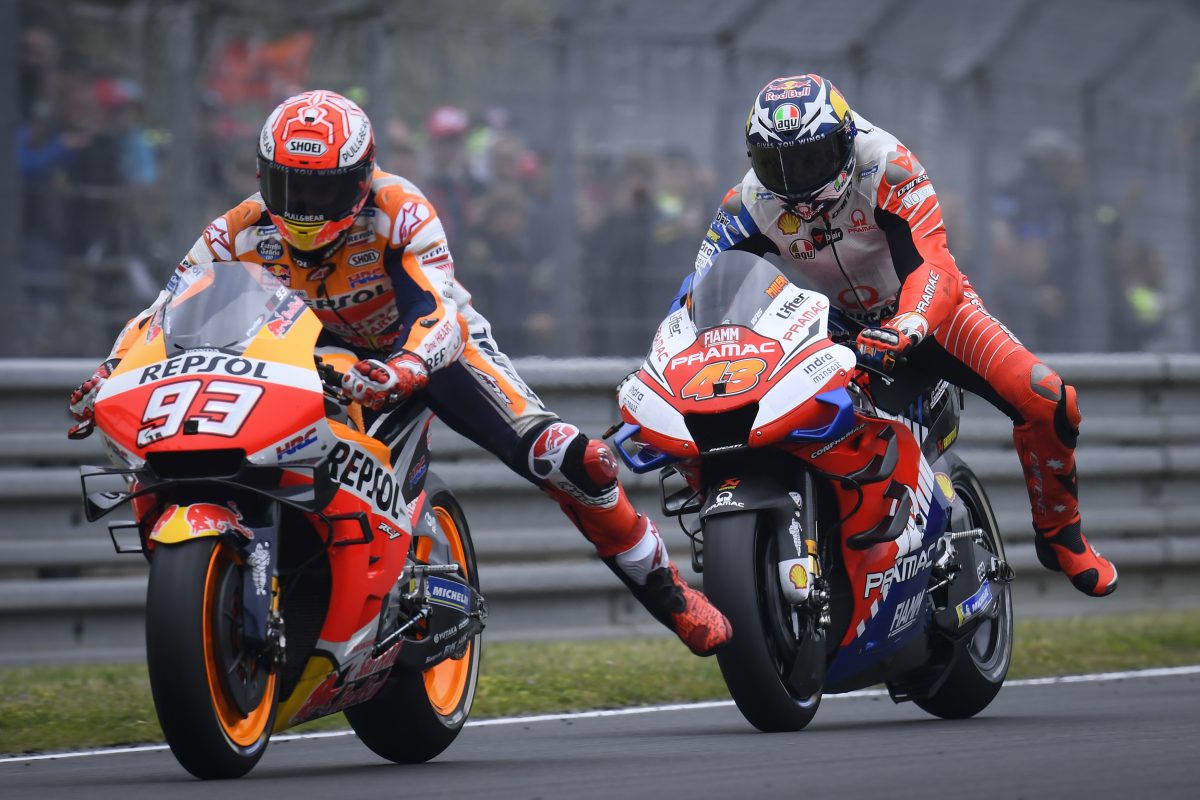 Jack Miller now ‘feels completely normal’ about racing with the front-runners having finished in the top four for a third time this season at the French MotoGP.

Miller even led in the early stages of the fifth race of the campaign at Le Mans, before ceding positions to eventual winner Marc Marquez and his factory Ducati counterparts, Andrea Dovizioso and Danilo Petrucci.

The Queenslander also finished fourth in the French round last year, a performance he described at the time as “maybe … the most convincing race of my career”.

In 2019, however, he felt “in the middle of happy and annoyed” as he becomes somewhat accustomed to racing at the pointy end of the premier class field on his Pramac Ducati.

That assessment comes despite, as Miller pointed out, finishing 2.9s behind the winner compared to 6.3s in 2018 when Marquez also took victory.

“Us riders always focus on what we could have done better when we get off the bike, straight away at least, so I should probably be more excited for a fourth place,” he wrote in his Red Bull column.

“But maybe that’s a good thing too, in that I know we have the bike and I know I can do it now, that’s all three races I’ve finished this year in fourth or better.

“Last year here, fourth was a bit of a lonely race and felt like a bit of a bonus; this time it feels completely normal to be up there fighting for those big points. I expect that of myself.

“Maybe it’s not completely normal leading a MotoGP race – not yet anyway, but we’re working on that …”

Miller appeared to fade shortly after being re-passed by Marquez’s #93 Honda on Lap 7, and he gave up spots to Dovizioso and Petrucci on Laps 17 and 20 respectively.

While admitting that his decision to let the factory bikes past did not pay dividends, the 24-year-old believes he learned a lot about tyre management in cold weather which saw all but one rider take soft compound Michelin tyres on the front and rear.

“What I learned mainly was about managing the tyres on a cold track – it was only 18 degrees track temperature here today – and how to do that on a track with a lot of stop-go corners where you have to accelerate out after a hard braking zone, and not spin the tyre off its head.

“The tyres started to become a factor after the first eight to 10 laps, but it wasn’t so much in the fight I had with Marc, where I took the lead on lap five for a couple of laps, and then we had a fight for a few corners on lap seven before he took off.

“It was more catching Marc where I hurt the rest of my race, the laps I did narrowing the gap to him.

“I knew I had to try to slow down the pace after I’d passed him as I could tell I’d get some warning signs before too long, but he got back past me and I realised then that beating him, unless he made a mistake, wasn’t going to happen.

“He kept opening up the gap in the final sector of the lap so I concentrated on keeping calm, trying not to make any mistakes, and I think I was able to do that.”

Miller’s result moved him above Maverick Viñales into sixth position in the championship.

Round 6 is the Italian MotoGP at Mugello on May 31-June 2.