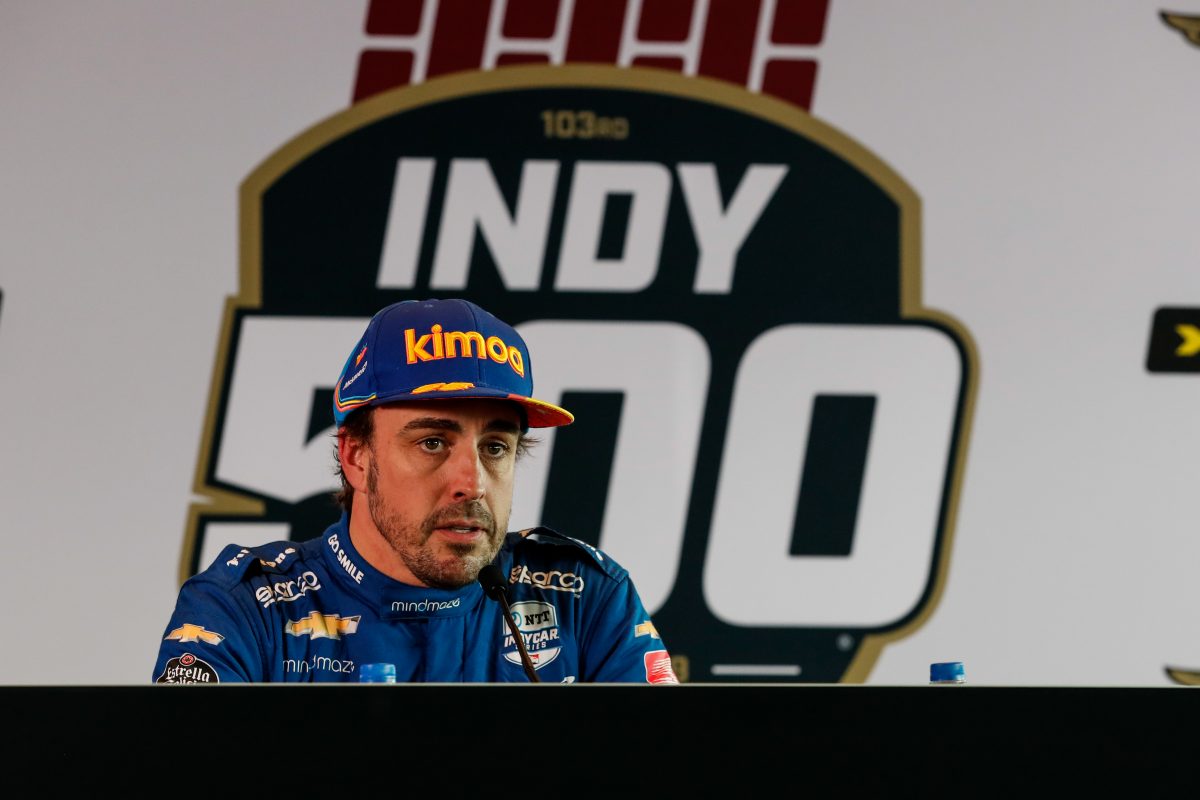 Spencer Pigot was fastest on a dramatic first day of Indianapolis 500 qualifying as Fernando Alonso and James Hinchcliffe failed to make the top 30 guaranteed starting spots.

The two-time world drivers’ champion and 2016 Indy 500 pole-sitter will both face the pressure of a six-driver Sunday shootout to fill the final three places on the grid for the 103rd running of the classic race.

The other Saturday non-qualifiers were Patricio O’Ward (#31 Carlin Chevrolet), Kyle Kaiser (#32 Juncos Racing Chevrolet), Jordan King (#42 Rahal Letterman Lanigan Honda), and Max Chilton (#59 Carlin Chevrolet), meaning that four out of the six were on the outside despite running the more powerful Chevrolet engine.

Alonso (#66 McLaren Racing Chevrolet) suffered a punctured right rear tyre during his initial qualifying run after a first lap that would have put him on the edge of the top 10.

“After the punctured tyre, we waited until later in the afternoon to see if the conditions would improve.

“We improved our speed slightly, but not enough to reach the top 30.

“We’ll try to do something overnight, but there’s not much we can do now to change our speed.

“We have to execute on the run tomorrow the best we can and try to do a good job.

“Hopefully it will be enough to be in the top three of the six.”

Hinchcliffe (#5 Honda), who famously failed to qualify for the Indianapolis 500 in 2018, faces the prospect of missing the most important IndyCar Series race of the season for the second year in a row.

The Canadian crashed heavily in Turn 2 on the first lap of his qualifying run, but was quickly cleared by medical staff to return to competition.

Schmidt Peterson Motorsports rolled out a spare Honda-powered car, but Hinchcliffe was unable to post the necessary speed to make the top 30.

Weather permitting, Saturday’s fastest nine drivers will make another qualifying run on Sunday to determine the order of the first three rows of the grid.

However, rain is in the forecast and IndyCar Series officials have already announced that the Last Row Shootout will take precedent over the Fast Nine if inclement weather is a factor.

If Sunday is rained out, the Last Row Shootout will be contested on Monday, and Pigot will be awarded pole position.

Chevrolet took six of the top nine speeds, including the top four.

Pigot admitted that he would not be sad to see Sunday rained out to guarantee his first career IndyCar Series pole.

“Obviously we love driving at these speeds and qualifying for the Indy 500 is such a thrill,” said the American.

“If it doesn’t rain, it’s not the worst thing because we’ve got a great car.

“Ed Carpenter Racing has put together an absolute rocket ship for me.

Power is the active leader with 56 Indy car poles, but he has never started from the top spot in the Indianapolis 500 and was not picky about what he wants out of the weather.

“Either way it’s good, but this is definitely a place I want to be on pole,” declared the Queenslander.

“It’s one of the only places where I don’t have a pole and I’d love to have a shot tomorrow.

“I feel like there’s about five drivers that have a chance.

“It’s going to be all about the wind and the gusts and the track is probably going to pick the pole position.

“I look forward to it and really hope I get to have a shot.”