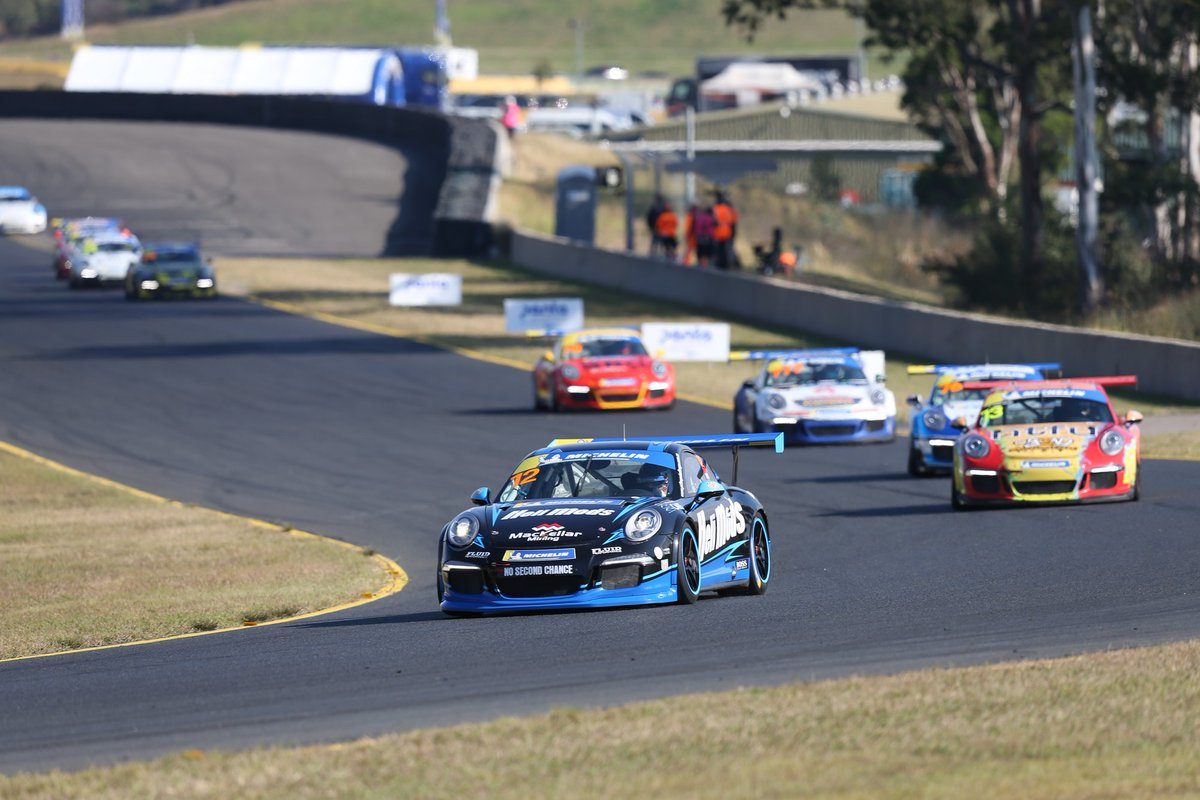 Jones was under pressure for the win in the final five laps of the 25-lap encounter, but a slight mistake from Love on the last lap gave Jones a cushion until the chequered flag.

Ryan Suhle was swallowed up on the start as Sam Shahin moved into the lead from a fast-starting Jones, who then took over the top spot at Turn 5.

Reporting a clutch issue, Suhle eventually stopped on track later in the lap.

Christian Pancione made his way up the order and into second, while Love took away third from Cameron Crick.

Marcel Zalloua and Michael Hovey came together at Turn 6, badly damaging both cars, while a few laps later, Shane Barwood also found the fence after spinning off Turn 5.

Max Vidau made his way back into the top five after a pass on Shahin, but was demoted when Brett Boulton got by and Vidau lost further positions.

Love cut by Pancione for second as the duo made their way through lapped traffic, before setting off up the road to Jones.

Although he closed the gap, Love could not find a way past, with Pancione, Crick, and Boulton rounding out the top five, while Vidau crossed the line eighth.

In Race 2, Jackson Walls launched well off the front row of the grid, while Astuti and Lochie Hughes made considerable wheel-to-wheel contact in the opening corners, with the latter retiring.

Leeds dropped off the track at Turn 6 and fell back to last on the road after Ryan Suhle dived down the inside for third on Lap 2.

Astuti pulled out of the slipstream on Lap 4 and took the lead from Walls.

Suhle then seized second with a replica move at Turn 1 in the draft, pushing Walls back to third.

As the race headed into its closing stages, Suhle began challenging Astuti, but the pair made contact exiting Turn 2 as the former lost time running onto the grass.

Astuti took the chequered flag first ahead of Suhle while Leeds pipped Walls for third at the line.

Leeds headed the field from lights to flag in Race 3 to win from Hughes and Suhle.

Mark Short cruised to victory in Race 2 for the Australian Prototype Series after a mistake from David Barram.

Barram led the field away at the start, but locked up at Turn 6 and ran off the road, allowing Short through to the lead.

Short quickly opened up a sizeable gap, bringing the car home 10s ahead of the next best car.

Peter Paddon was running in the top 10, but slowed early in the race and retired to the pits.

Daniel Gonzalez held second for much of the race but was passed by Mark Laucke at Turn 8 as the pair went different ways around a backmarker in the closing stages of the race.

Short, Laucke and Gonzalez were the podium, while John-Paul Drake and Carmelo Bonaventura completed the top five.

Chris Perini led away on the rolling start, but the race was quickly put under Safety Car after a crash at the first corner.

Paul Braico and John-Paul Drake ended up in the fence, with the cars needing recovery.

After more than 10 minutes under Safety Car conditions, Perini darted off out front again, but the order changed after the compulsory pit stop sequence.

Brad Neilson found himself in the lead, however he came under attack from Smith as the race went into the last 15 minutes.

Neilson ran wide and easily allowed Smith through into the lead; the positions remaining the same at the chequered flag.