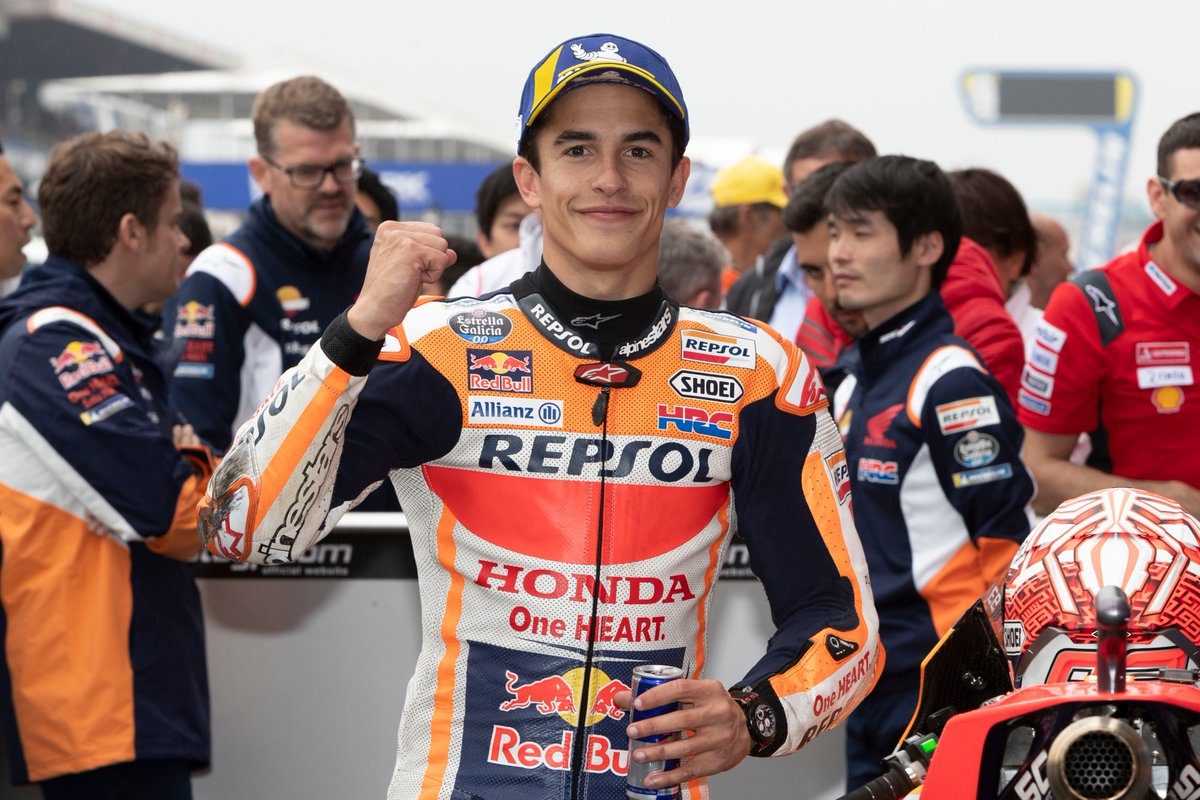 Marc Marquez has put another 25 points in his pocket at the French MotoGP despite both Danilo Petrucci and Jack Miller taking turns in the lead early on.

Petrucci headed the field for two brief moments in the opening lap-and-a-bit but went on to finish third having not been able to make late moves on Mission Winnow Ducati team-mate Andrea Dovizioso stick.

Miller failed to sustain his early pace but made it Ducatis second, third, and fourth, while Valentino Rossi took the chequered flag in fifth position after 27 laps under cloudy skies.

Petrucci might have thought that he would lead the opening lap but pole-sitter Marquez squeezed his Repsol Honda back past #9 into the Turn 3/Turn 4 chicane.

Miller emerged from the opening corners in third, where he had started on his Pramac machine, but held Dovizioso wide into the chicane and the Italian dropped back to seventh.

Petrucci passed Marquez at Turn 3 on Lap 2 but the Spaniard took the spot back immediately as they exited Turn 4, while a recovering Dovizioso squeezed past Pol Espargaro for fifth at the same complex a lap later.

Miller got Petrucci at Le Musee a few moments later before the Italian ran wide at Garage Vert and let both Rossi and Dovizioso through.

Dovizioso overtook Rossi on the run to Chemin aux Boeufs on Lap 4, by which time Miller was tailing Marquez and indeed set the then-fastest lap of the race.

The Queenslander made his move at the Turn 3/Turn 4 chicane on the next lap, before Marquez wrested the position back on Lap 7 at La Chapelle in a stoush which lasted several corners.

Their battle allowed Dovizioso to close the gap but he found himself stuck behind Miller as Marquez moved his lead past a second on Lap 14.

The stalemate was resolved when Miller ran wide at Le Musee on Lap 17, and Petrucci, who had re-passed Rossi on Lap 13, took third from the Australian on Lap 20.

Petrucci made attempts to pass Dovizioso on Laps 23 and 25 but could not pull off either and came home in third, still his first podium for the factory Ducati team.

Rossi caught Miller on the final lap but did not seriously shape for a pass and finished fifth on his Monster Energy Yamaha.

Marquez, meanwhile, was out on his own for the latter half of the race and got as far 4.1s ahead before cruising to an inevitable conclusion.

The win is Honda’s 300th in the premier class of grand prix motorcycle racing, and Marquez’s 47th.

“(I’m) Happy because in this track normally Ducati are very fast, Yamaha very fast, but we are there, so this is good news for us,” said Marquez.

There was also reason to celebrate for Red Bull KTM Factory Racing as Pol Espargaro finished sixth in the dry.

The Petronas SRT Yamahas of Franco Morbidelli and Fabio Quartararo followed, despite the latter dropping as far back as 16th after an early error.

There was a bizarre incident on the warm up lap when both Joan Mir (Suzuki Ecstar) and Karel Abraham (Reale Avinitia Ducati) folded the front ends of their respective bikes and crashed within metres of each other at the chicane.

Both eventually started on their second bikes but Mir ended up the only non-pointscoring finisher and Abraham was black flagged having exited the pits after the leader had crossed the finish line at the end of the first lap.

Maverick Viñales (Monster Energy Yamaha) was also among the non-finishers having been taken out by Francesco Bagnaia (Pramac Ducati) on Lap 7, although by then he was already well outside the top 10.

Marquez’s championship lead is eight points over Dovizioso with Round 6 at Mugello on May 31-June 2.