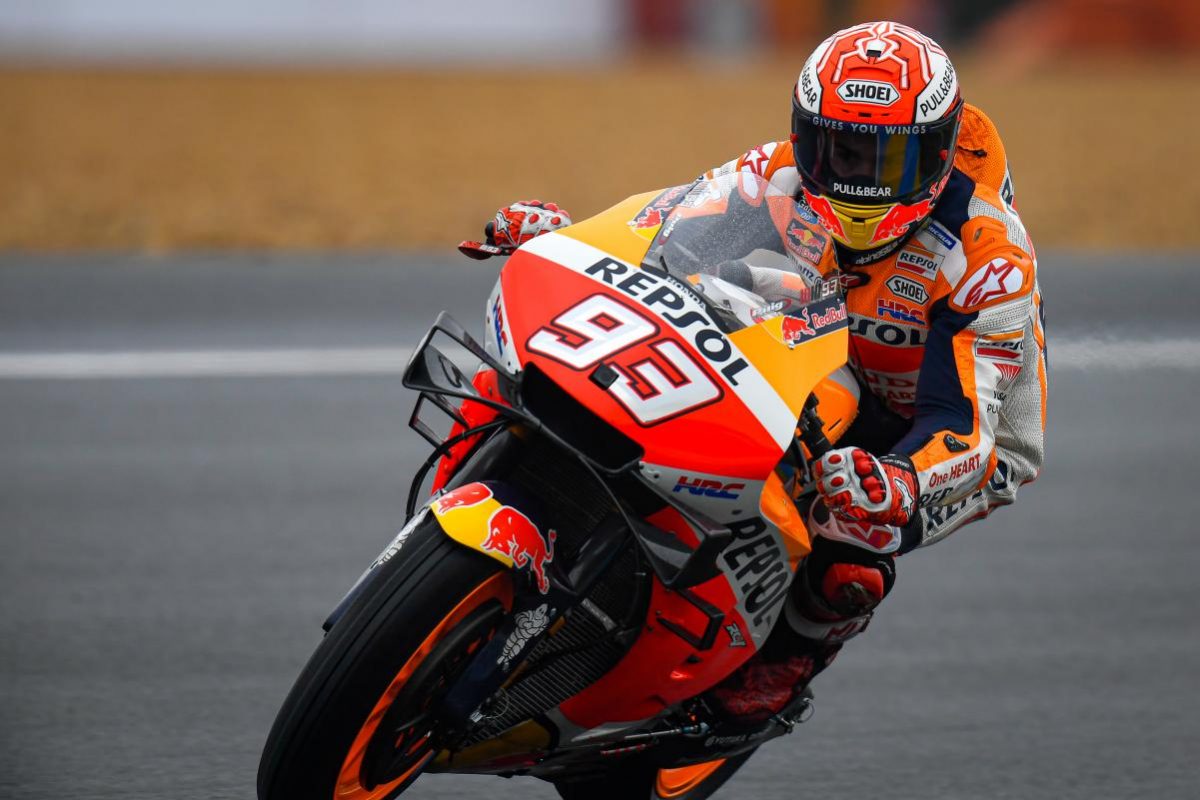 Pole-sitter Marc Marquez will share the front row with Danilo Petrucci and Jack Miller after an unusual, wet qualifying session for the French MotoGP.

Both Marquez and Miller crashed during the session but the former had already set the time which earned him pole, and the latter survived Valentino Rossi’s late advances.

All but one of the four Yamahas started Qualifying 2 on slicks despite rain continuing to fall at Le Mans, but unlike the bold move which Valentino Rossi got away with earlier in the afternoon, they were quickly back into the pits to change to wets.

The Spaniard lost the front end of his Repsol Honda after an unsettled run into La Chapelle next time around, while Miller bailed out of his following lap.

Petrucci had his first flying lap cancelled but undercut Miller by 0.054s on his next to earn a spot on the middle of the front on his Mission Winnow Ducati.

Andrea Dovizioso got the #04 factory Ducati into position four while Rossi, having been eighth fastest with his first flyer, improved twice more.

Marquez continued to circulate without pitting after his crash but did not find more time, while Miller lost the front end of Bike #43 at Turn 3 in the final four minutes.

That gave Rossi a chance to bump the Australian from the front row in the 15th and final minute, but the time went away from the Monster Energy Yamaha rider in the third sector, leaving him fifth on the grid.

Franco Morbidelli, on a satellite Petronas SRT Yamaha, joins his Italian compatriots on the second row, one position ahead of Takaaki Nakagami on the Idemitsu LCR Honda.

Earlier, Rossi and the factory Yamaha crew pulled off a masterstroke by sending ‘The Doctor’ out on slicks in Qualifying 1, the only one to do so at the start of the session, and he set the fastest lap of the stanza as the track came to him.

The French MotoGP will be contested over 27 laps from Sunday at 2200 AEST.