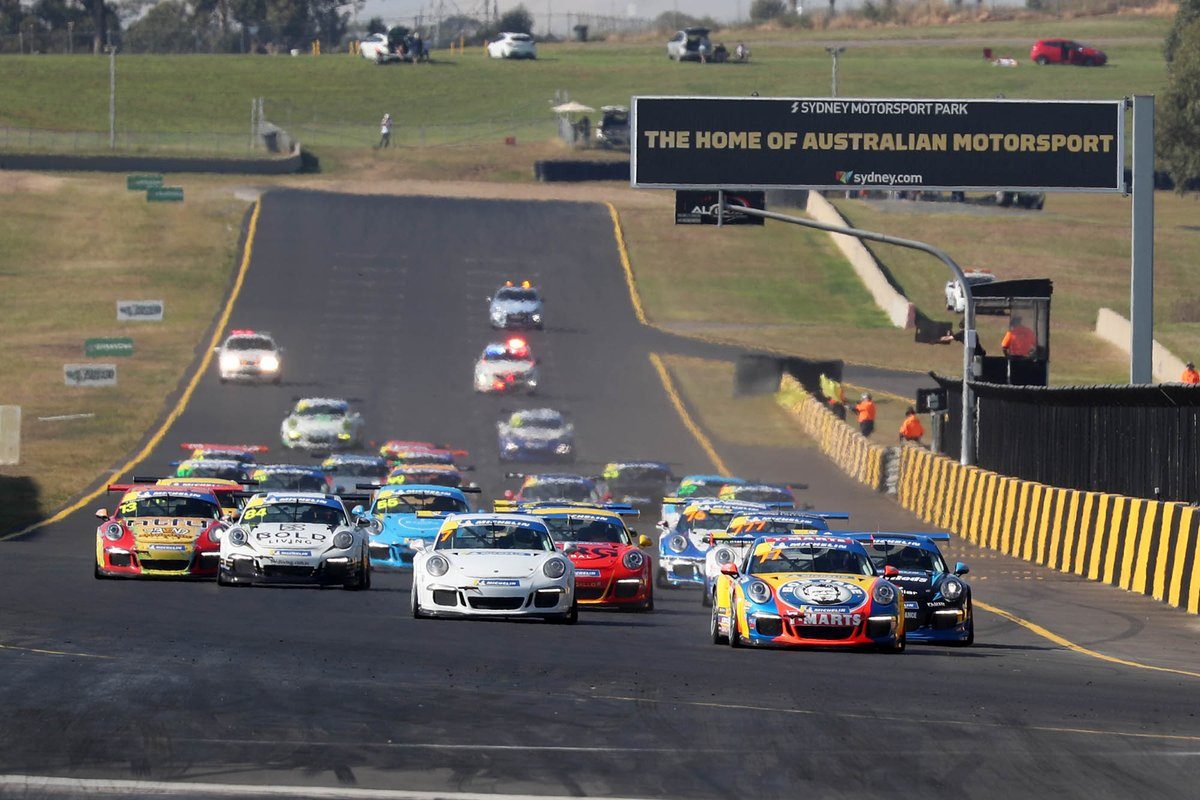 Vidau bogged down off the line from the front row of Race 2 and went nowhere with a clutch issue, as Aaron Love shot into the lead.

The Safety Car was immediately deployed to recover Vidau’s stationary car before the green flag flew again on Lap 4.

Love led the field on the restart but made a mistake on cold tyres, allowing Suhle into the lead before falling back to fifth.

The fight was on for second late in Race 2, with Sam Shahin having to defend from Jones and Tom Taplin.

Meanwhile the recovering Love had a wild moment at Turn 1, sliding sideways off the road at high speed and coming to rest on the grass after launching over the gravel, finishing way down the order.

Suhle clinched the victory by almost three seconds ahead of Shahin who held on for second in front of Jones, Taplin and Christian Pancione.

Vidau won Race 1 from the front row of the grid, while Love passed Jones for second towards the end.

Race 3 for Porsche Michelin GT3 Cup Challenge is on Sunday at 1025 AEST. Luis Leeds held off Lochie Hughes in the first few corners to win the opening race of Round 1 in the CAMS PAYCE Australian Formula 4 Championship.

Hughes mounted a challenge off the line but wasn’t able to complete a pass as Leeds drove off up the road for the remainder of the 11 lap race.

Jackson Walls and Emerson Harvey were engaged in a race-long battle for fifth place, with Walls retaining the position through until the chequered flag.

Leeds won by over three seconds ahead of Hughes, while Antonio Astuti finished third.

Ryan Suhle, who was due to start third, came into the pits on the formation lap and did not take the green flag.

Race 2 for the Australian Formula 4 Championship takes place on Sunday at 1220 AEST.

David Barram romped to victory in Race 1 of Round 1 for the Australian Prototype Series.

Barram darted off out front at the start despite coming under slight pressure in the opening few corners from Mark Short who ultimately lost touch with the leader.

Running in third, Mark Laucke made a slight mistake at Turn 2 and almost allowed Jason Makris past, but the former managed to hold on for a few more laps.

Makris then committed to the move in the final 13 minutes to move into third on the road, while Daniel Gonzalez followed through a handful of laps later.

Short was handed a five-second time penalty for a start line procedure breach as Makris closed down in the final 10 minutes; the latter crossing the line within five seconds of Short to nab second.

The final classification saw Barram take a 14s win over Makris, while Short only dropped to third with his penalty ahead of Gonzalez and Laucke who completed the top five.

Race 2 for the Prototype Series gets underway on Sunday at 0950 AEST.

Chris Perini won Race 1 of Round 3 in the Radical Australia Cup.

There was an incident at Turn 2 on the opening lap involving several cars, however, the race stayed green.

Perini led the early stages, while Peter Paddon was moving up the field from last on the grid.

Paddon’s charge was halted after he made contact trying to pass Paul Braico for fifth at Turn 2, ending the race for both cars.

After the compulsory pit stop sequence had panned out, Perini retained the top spot and maintained a healthy cushion to second place until the chequered flag.

Perini took home the win over Kostinken Pohorukov, while Stephen Champion rounded out the top three.

Race 2 for the Radical Australia Cup is scheduled for Sunday at 1120 AEST.