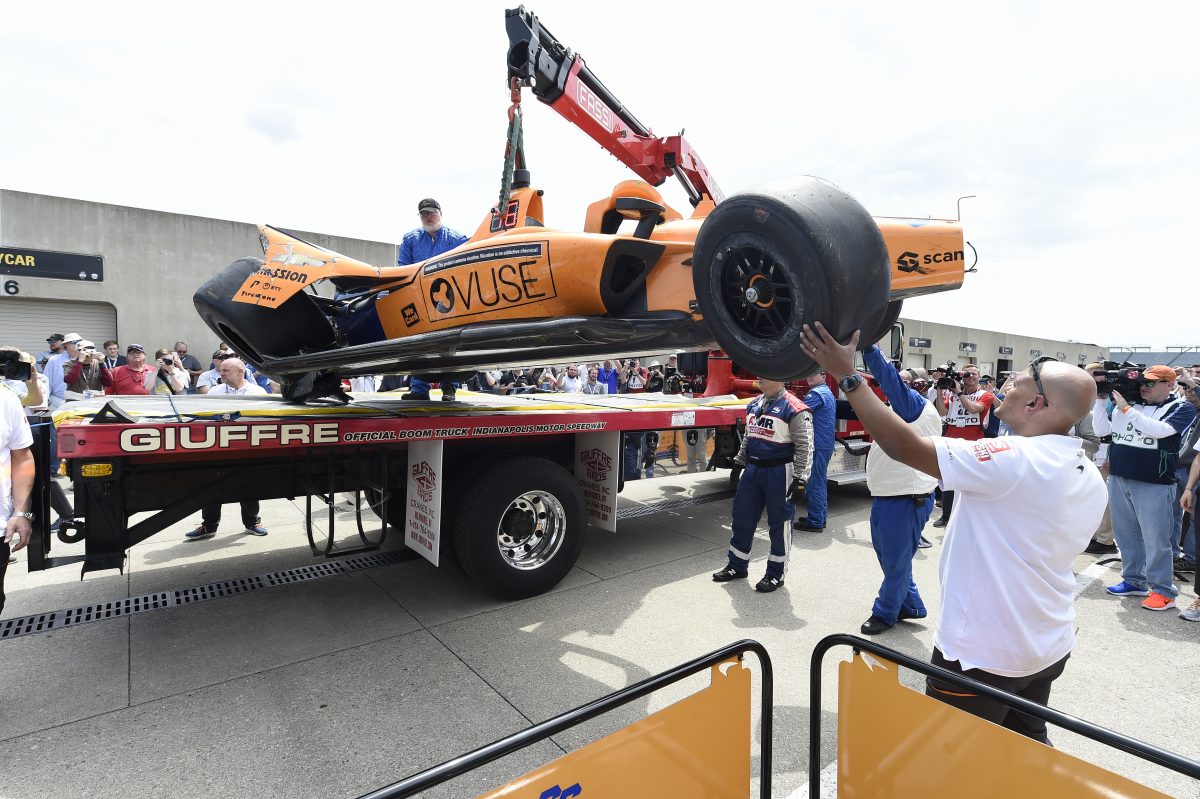 Alonso understeered into the wall in Turn 3 and damaged all four corners of his #66 McLaren Honda about 90 minutes into the seven-hour Wednesday session, while Rosenqvist’s Ganassi Racing Honda sustained considerably more damage after a heavy shunt near the end of the day.

It was the second day in a row that Alonso failed to complete his planned program. His Tuesday practice was cut short by an electrical problem.

“It was understeer on the car, and even if I lifted the throttle on the entry of the corner, it was not enough,” Alonso stated.

“I lost completely the front aero.

“The wall came too close and too quickly.

“Unfortunately, it happened today and we will lose a little bit of running time again.

“I’m sorry for the team, but we will learn and hopefully we will come back stronger tomorrow.”

Here’s the moment @alo_oficial hit the wall during #Indy500 practice 😮

Rosenqvist appeared to take a low line through Turn 2 and his car completed a full spin before smacking the wall at the exit of the corner.

Both drivers were checked and released from the trackside medical centre.

Team Penske’s Josef Newgarden turned the fastest lap of the day at 368.328 kph, in his Chevrolet, just edging the Ganassi Honda of Scott Dixon at 368.271 km/h.

“We put up a good number, but I don’t think that tells you much.

“We’re happy enough with the start and we’re just dialing it in.

“We’re trying to get our checklist all checked off and hopefully we’ll be good for next Sunday (the May 26 race).

“The cars are difficult to drive when you get deep in the pack.

“If you get in a 15-car pack, you’re going to need to be able to drive back to the front.

“You’ve got to have a car that can move forward.”

Newgarden said he was not surprised by the pair of Wednesday crashes.

“I think that tells you people are fighting both ends of the car,” he remarked.

“If you get too close to someone or make one wrong move, these things will bite you in a hurry.

“If you’ve been around here and you’ve never hit the wall, I think eventually you will.

“That’s not a bad thing – that’s the way this place works.

“As soon as you feel like you’ve got it under control, it normally bites you. It shows the difficulty of this place.

“These cars are not easy to drive. They’re really on the edge.

Will Power (#12 Team Penske Chevrolet) narrowly missed being swept into Rosenqvist’s accident and was 21st on the speed charts at 364.712 km/h

Another big hit during #Indy500 practice, but @FRosenqvist has been checked, cleared and released from the @IMS infield medical center 🙌#INDYCAR // #ThisIsMay pic.twitter.com/MoG7o1Ce1C