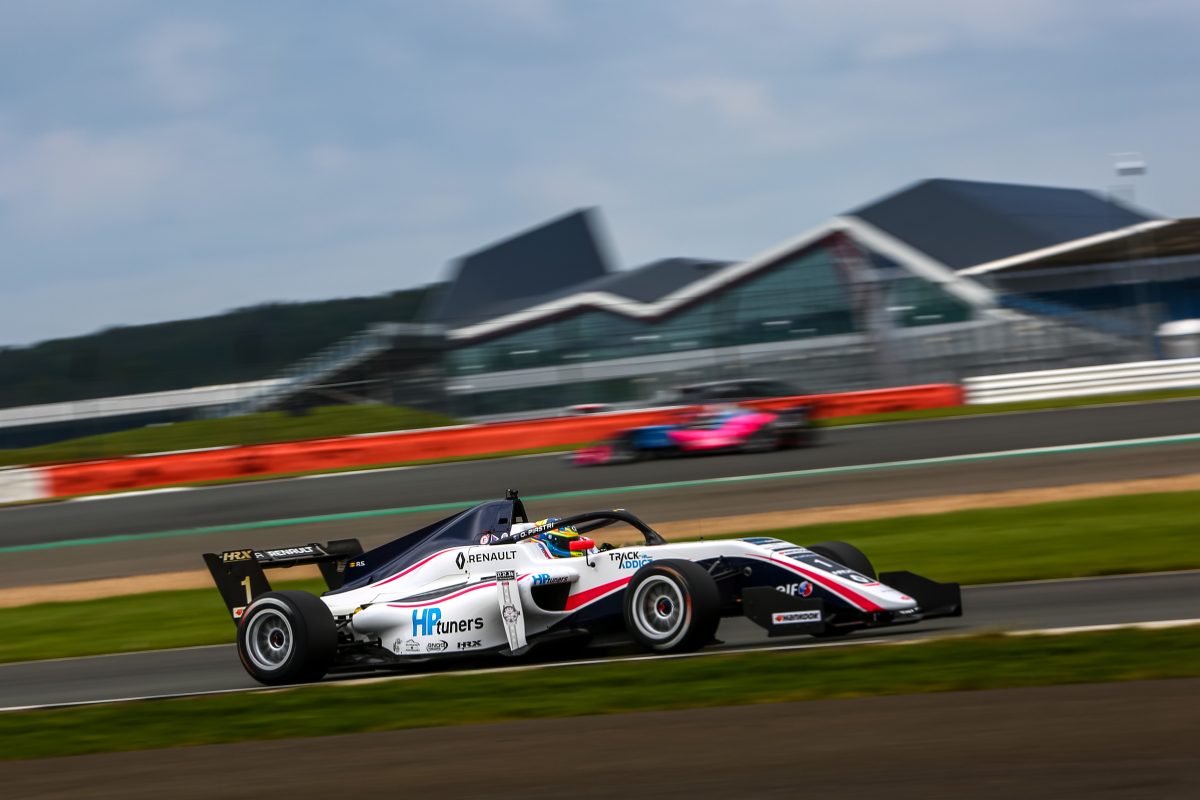 Melburnian Oscar Piastri has jumped to the top of the Formula Renault Eurocup standings by achieving his first two race wins in the series at Silverstone.

The R-ace GP driver qualified on pole for the first race of the second round but lost the lead to team-mate Alexander Smolyar in the opening corners.

When the Russian retired with a broken tie rod stud on Lap 9, Piastri was able to romp to a 12.7s win in 16 laps.

The Australian took a second pole of the weekend by more than half a second and made a strong start to stay ahead of Smolyar in the Sunday encounter.

Piastri pulled a gap and responded when Smolyar started to make inroads, with 3.4s separating them at the chequered flag.

“No win is easy,” said Piastri.

“My start was better than (on Saturday), but I couldn’t really afford myself to cruise in the opening laps. I had a really good pace, which allowed me to pull away and go on for the win.

“It is good to be at the top of the general classification although it doesn’t mean much after just four races. All I know for now is that I want more after these two victories.”

Victor Martins (MP Motorsport) trails Piastri by 16 points at the top of the table ahead of the next round at the Monaco Grand Prix on May 23-26. 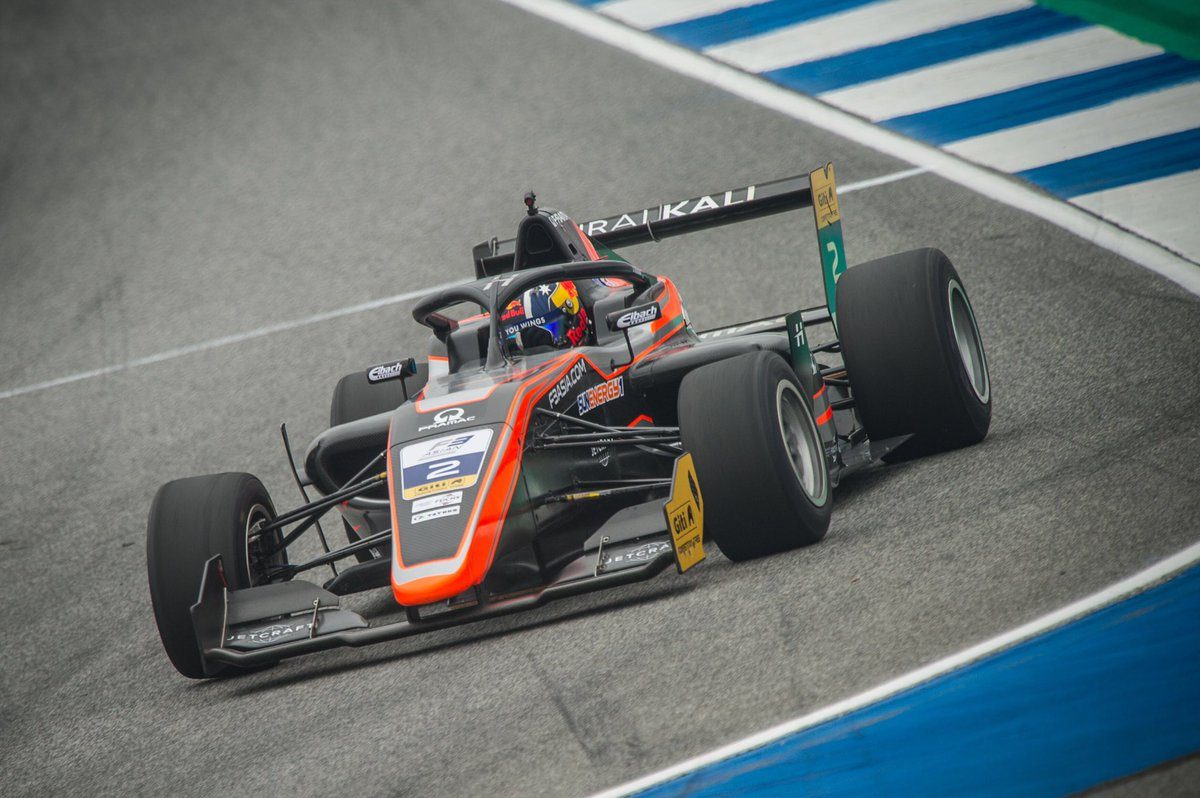 Jack Doohan picked up another race win bookended by two second placings in Round 2 at the Buriram International Circuit.

Doohan couldn’t find a way past pole-sitting team-mate Ukyo Sasahara at the start of Race 4 of the season and eventually finished four seconds in arrears.

In Race 5, he outfoxed Sasahara exiting Turn 1 on the second lap and put nine seconds on the Japanese driver between that moment and the chequered flag.

The Hitech GP pair went one-two again in Race 6, but it was Sasahara back on top and Doohan second.

The Australian did have to fight New Zealander Brendon Leitch, who went on an early charge before fading to finish almost 12 seconds behind Doohan.

Leitch had finished Race 4 in fifth but was a DNF in Race 5 after a clash with Ayrton Simmons.

Another Aussie in Tommy Smith went DNF and DNF due to technical problems before finally seeing a chequered flag in 10th in Race 6.

Doohan is second to Sasahara in the points ahead of Round 3 at Suzuka on June 22-23. 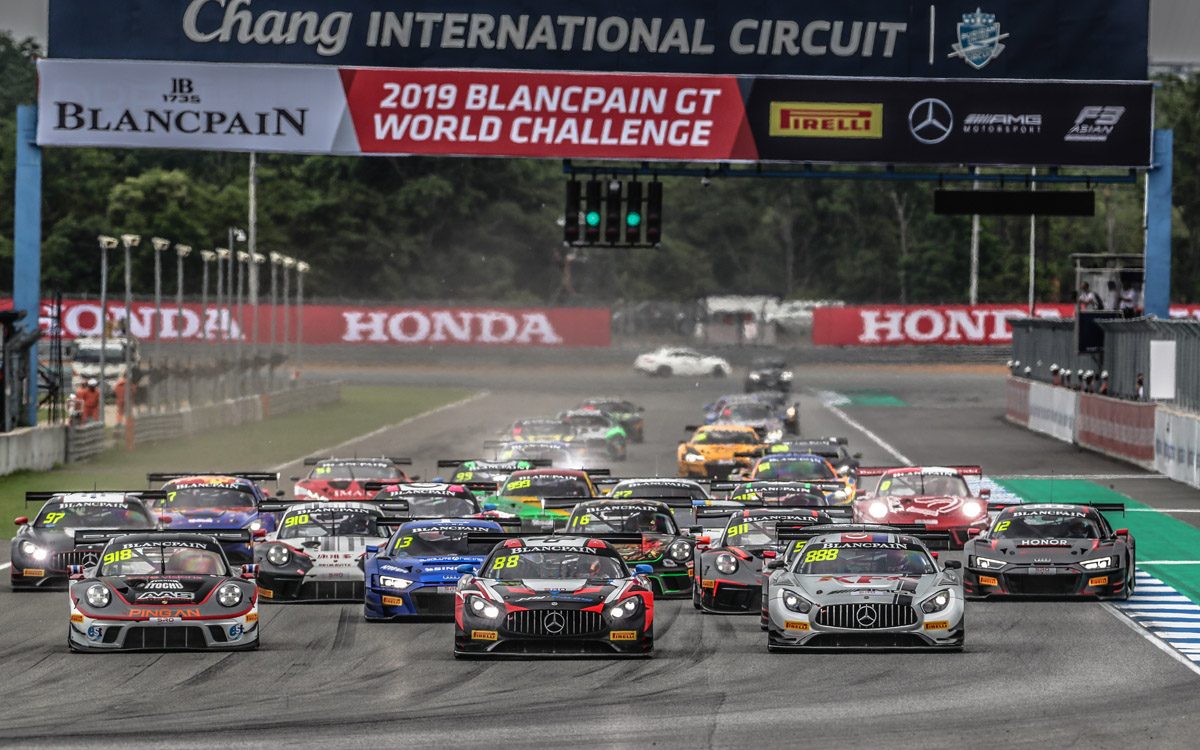 The Mercedes-AMG GT3 entry of Roelof Bruins and Manuel Matzger headed the 60-minute race from the Absolute Racing Porsche duo of Philip Hamprecht and Tanart Sathienthirakul.

The opening podium of the weekend was completed by Weiron Tan and Martin Rump aboard an Audi R8 LMS for Audi Sport Asia Team Absolute Racing.

Alexandre Imperatori and Vutthikorn Inthraphuvasak took out Race 2 of the weekend in their Porsche 911 GT3 R.

They headed the Heimgarther Ferrari in second and the Audi Sport Asia Team TSRT entry of Weian Chen and Andre Couto.

New Zealander Jono Lester was fifth in the opening race before being disqualified from Race 2, while Chris van der Drift went from eighth on Saturday to 27th on Sunday.

Hong Kong-based Australian Daniel Bilski finished 21st on Satuday before improving to ninth on Sunday aboard the B-Quick Racing Audi.

Round 3 of the Blancpain GT World Challenge Asia heads to Suzuka on June 22-23. 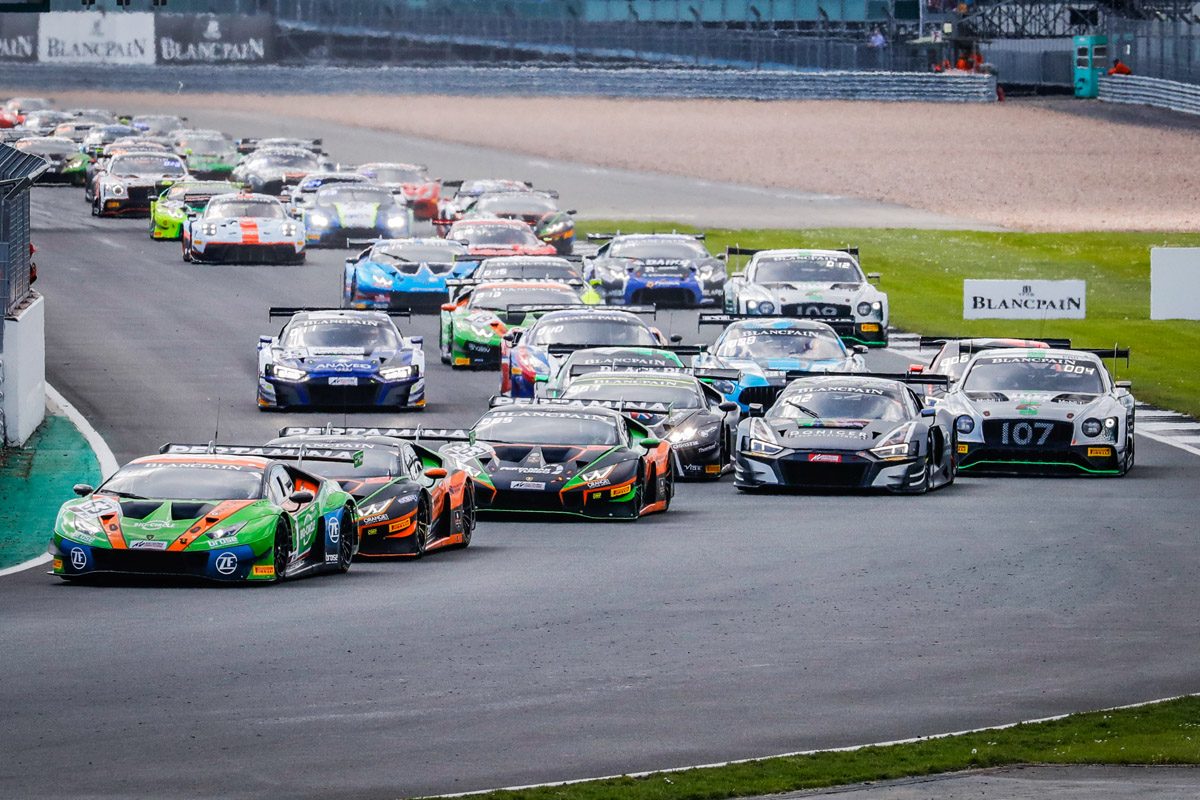 Of those, eight cars failed to reach the flag, among them the Nick Foster, Clemens Schmid, and Kelvin van der Linde after the Attempto Racing Audi was forced out after 15 laps.

Shae Davies raced with Paul Petit and Alex MacDowall to 25th overall in the Team WRT Audi while Australian Martin Berry was not classified, without a lap to their name, in the Ferrari 488 GT3 he was set to share with Pierre Ehret and Jose Manuel Balbiani. 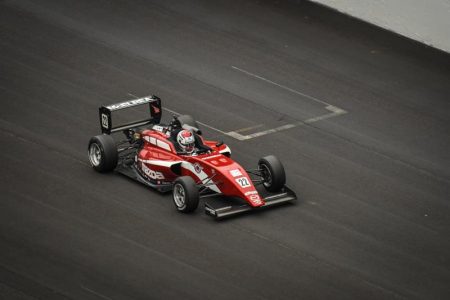 Hunter McElrea has picked up a second podium on the Indianapolis Motor Speedway road course after finishing third in the fourth race of the USF2000 season.

Braden Eves is now four from four after leading all 20 laps of the weekend finale, while McElrea briefly headed Darren Keane before being re-passed at the second restart.

Australian Cameron Shields failed to make the finish due to contact.

After just missing out on the win a day earlier, McElrea continues to hold second in the standings ahead of the next event at Indianapolis Raceway Park on the Friday of the 500 race weekend (May 24). 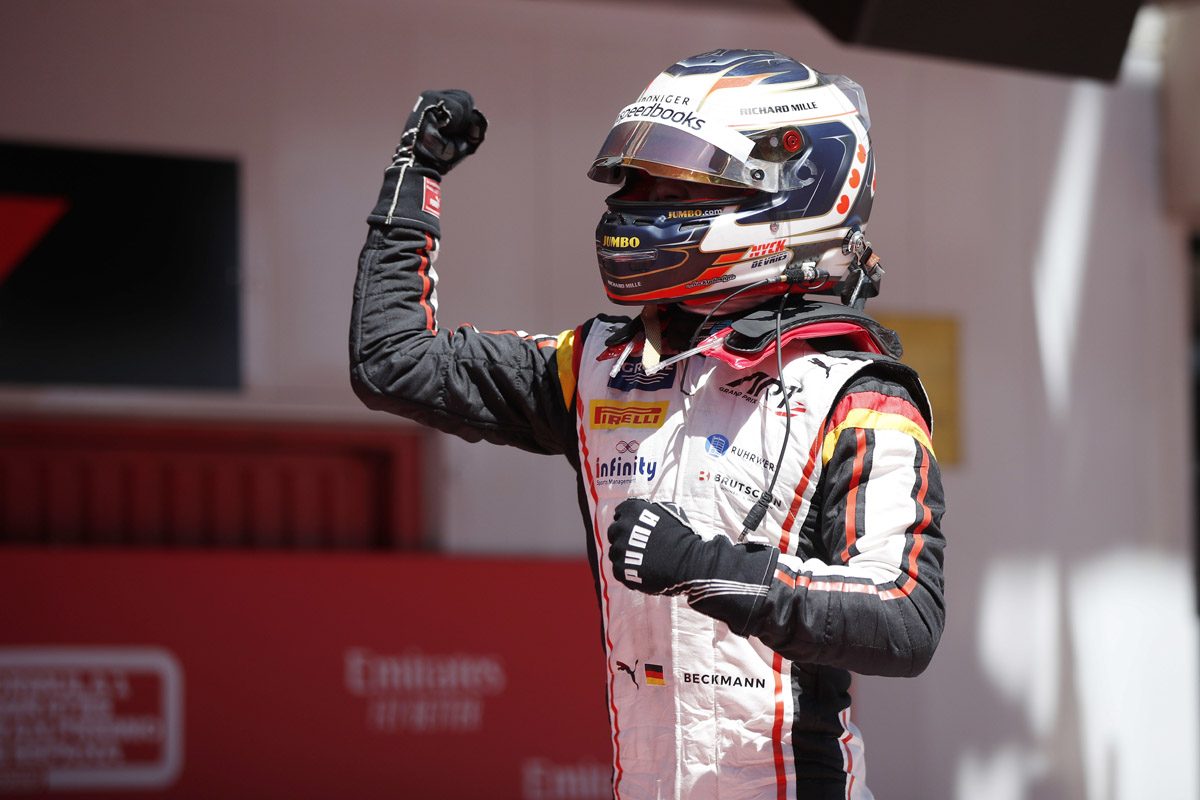 Nicholas Latifi won the opening Formula 2 race of the weekend in Barcelona, passing Guan Yu Zhou in the closing laps to secure his third win of the season.

Zhou then fell to third with Jack Aitken finding a way through, the Chinese driving hanging on to record his maiden F2 podium.

In the reverse grid sprint race, victory went to Nyck de Vries ahead of Luca Ghiotto and Callum Ilott.

Mick Schumacher had a troubled weekend, become embroiled in a number of incidents that left him 15th in the opening race before picking up a time penalty while battling with Aitken in Race 2 to finish 12th. 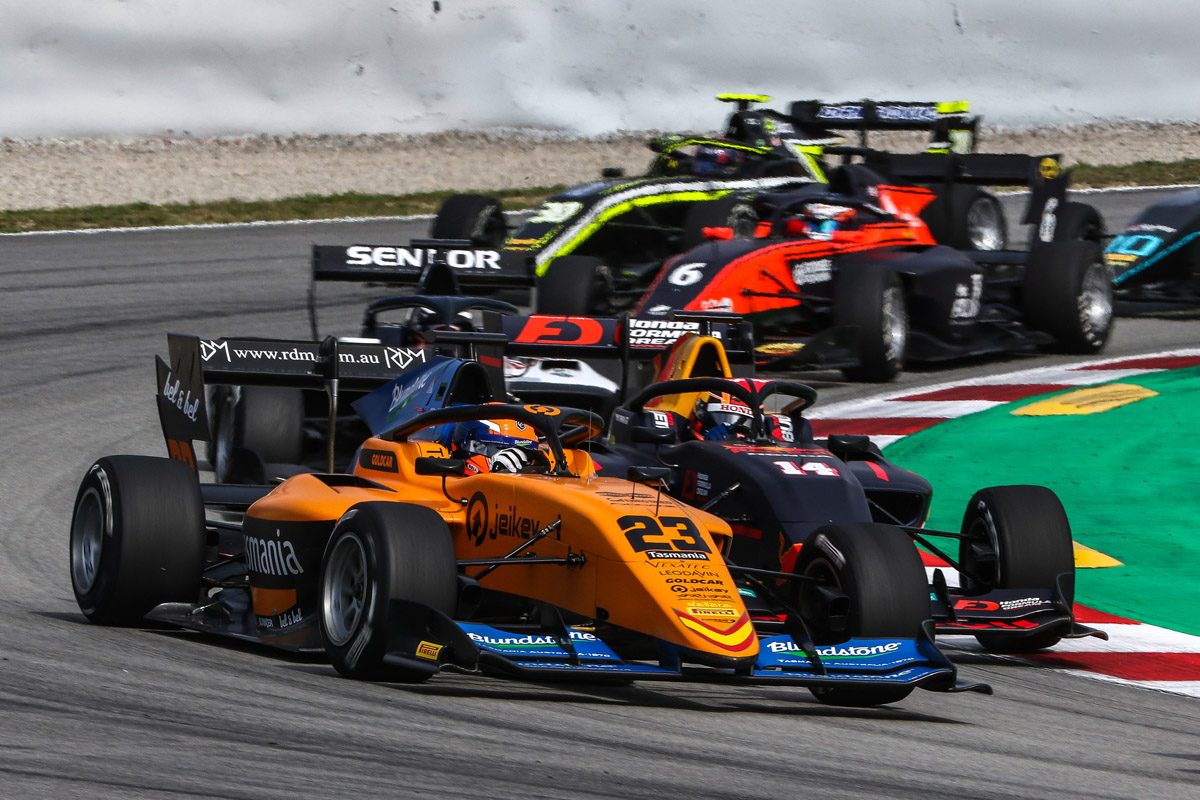 Armstrong was third in Saturday’s race behind Robert Shwartzman and Christian Lundgaard, the latter crossing the line first before a penalty demoted him to second.

Peroni copped a similar penalty for a Virtual Safety Car infringement, which saw him 14th at the flag. Without the penalty, he would have finished 11th.

Liam Lawson was a retirement, completing just eight of the race’s 22 laps.

Following the restart Peroni ran wide, and was judged to have sent Simo Laaksonen into the wall and was handed a stop-go penalty which saw the Australian the last classified finisher.

At the front, Juri Vips claimed second and Niko Kari third, while Armstrong was fifth and Lawson 17th.

The next round of the Formula 3 Championship joins Formula 1 at the French Grand Prix on June 21-23. 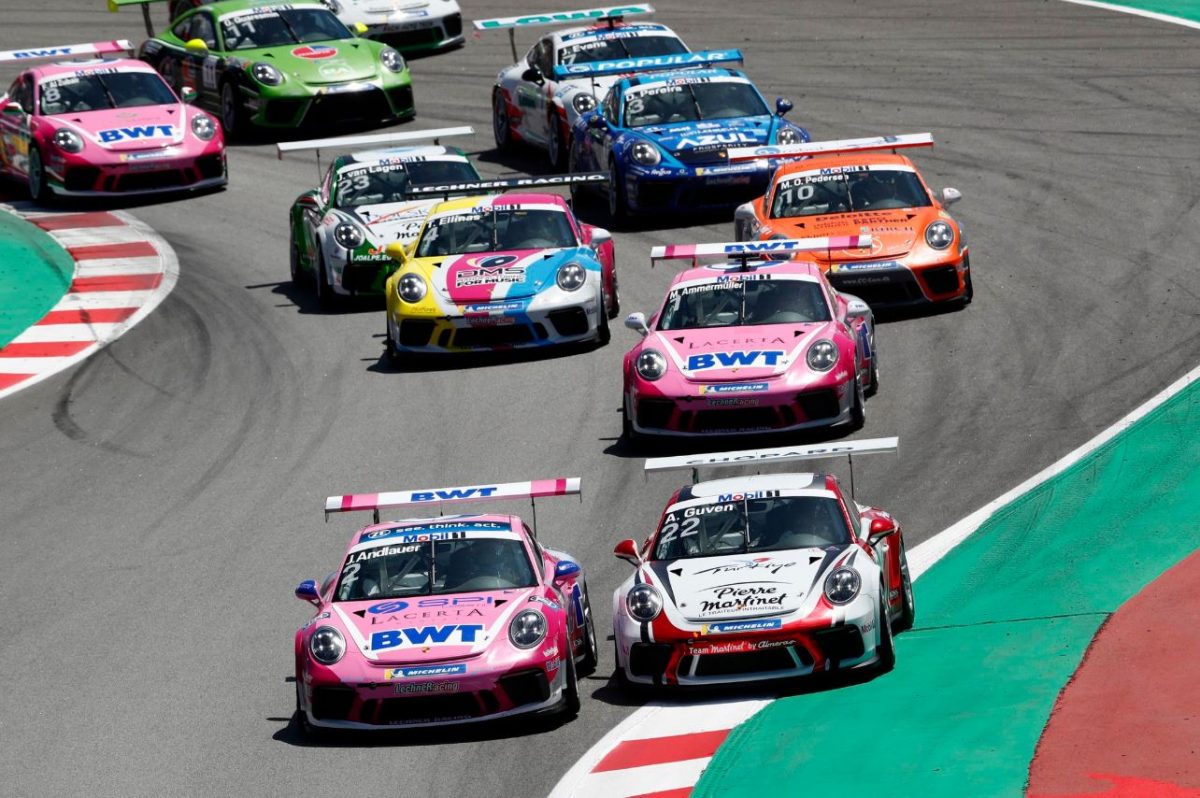 Julien Andlauer won the opening Porsche Supercup race of the season in Barcelona, heading rookie Ayhancan Guven, and Michael Ammermuller to the flag in the sole 14 lap race of the weekend.

Porsche Junior, and last year’s Carrera Cup Australia champ, Jaxon Evans was eighth to the line, three spots up from Joey Mawson in the first of the three Team Australia entries.

Evans moved forward two places in the race, having qualified 10th, while Mawson rose from 13th on the grid to be the third rookie home.

Mawson’s team-mates, Stephen Grove and Marc Cini, saw the flag in 23rd and 25th respectively. The result was a fourth in Pro-Am class for Grove, and fifth for Cini.

The next round of the Porsche Supercup heads to Monaco on May 23-26. 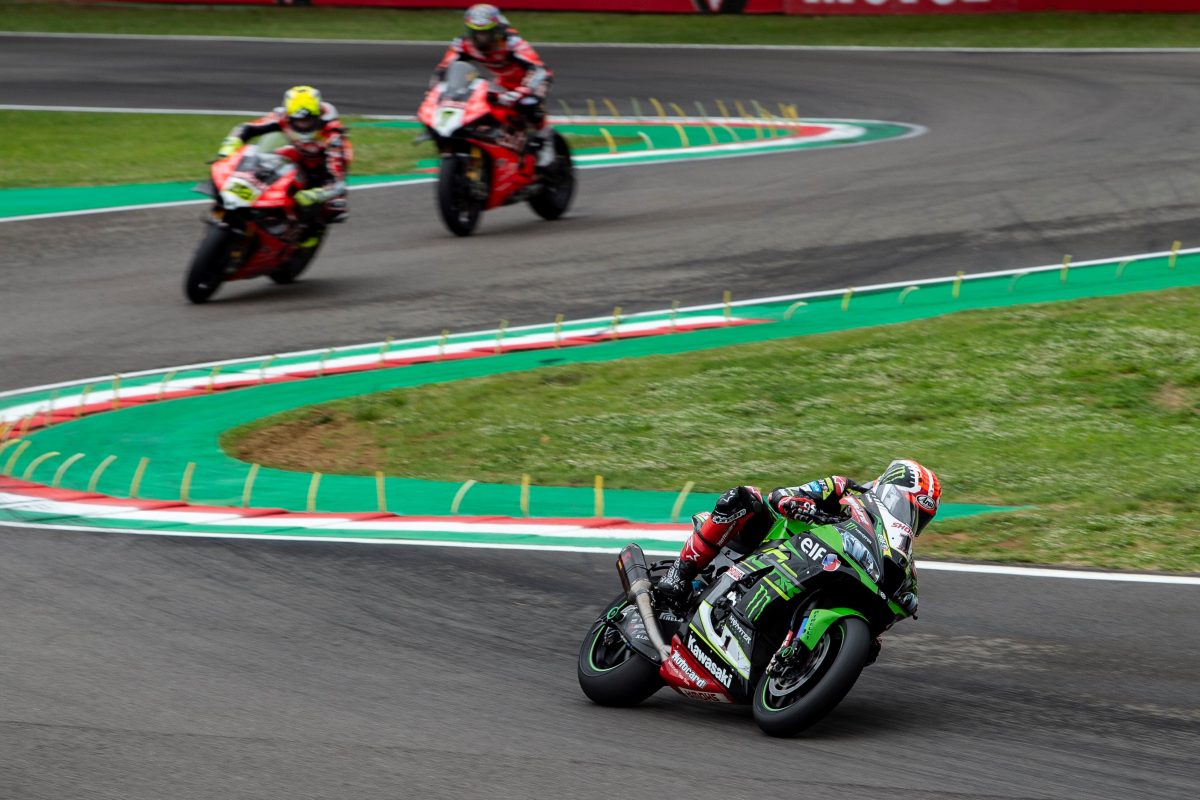 Jonathan Rea ended Alvaro Bautista’s unbeaten start to his WorldSBK career by winning both of the races which could be run in Round 5 at Imola.

Rea (Kawasaki Racing Team) passed pole-sitter Chaz Davies for the lead on Lap 1 of Race 1 and ran away to a 7.8s win over Bautista, who started third.

Davies only completed one lap due to a mechanical problem for his factory Aruba.it Ducati.

In the Superpole Race, Rea made an unsuccessful attempt to pass Davies on the first lap only for #7 to run wide through the final chicane anyway.

Rea officially led every lap of that race too, while Davies re-passed Bautista to finish 4.7s up on his team-mate in the battle for the minor placings.

Race 2 was cancelled due to heavy rain.

Rea snipped 10 points from Bautista’s championship lead to trail by 43 on the way to Jerez on June 7-9. 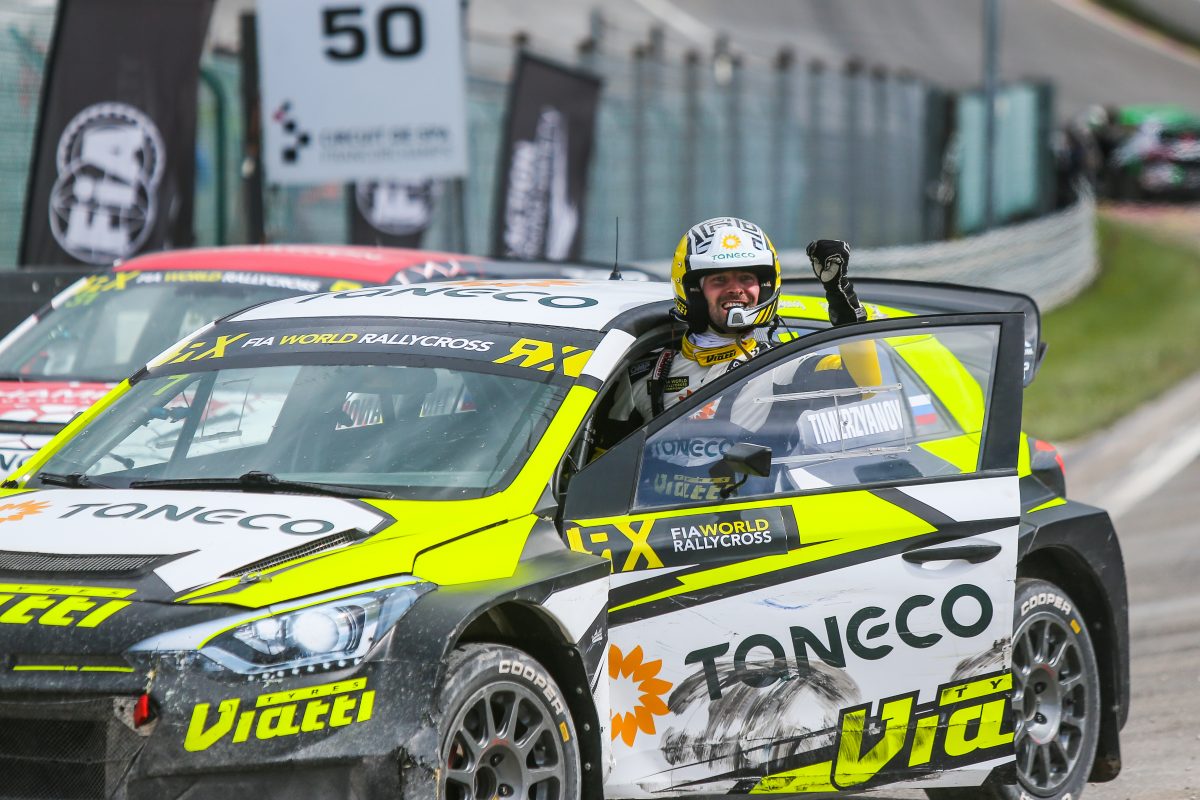 Timur Timerzyanov claimed a maiden win in the final of the Spa-Francorchamps World RX round.

The Russian started the race from the second row of the grid but got the jump on the field and led the rest of the way, having taken his joker on the final lap.

Pole-sitter Andreas Bakkerud finished second, while Kevin Hansen retains the championship lead despite being eliminated in the semi-finals. 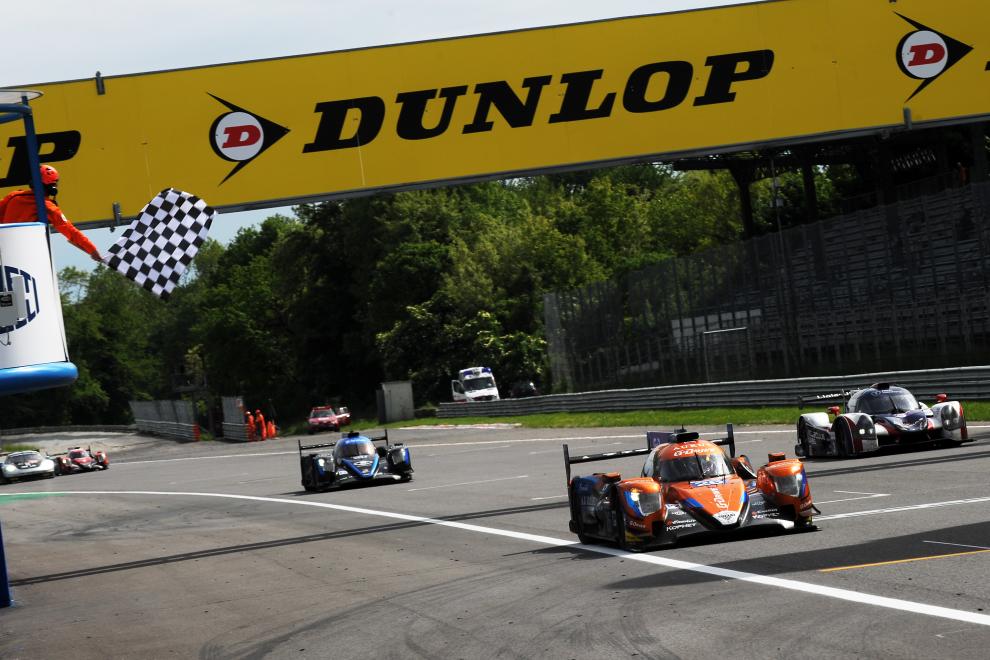 G-Drive wins the 4 Hours of Monza

The 4 Hours of Monza, the second round of the European Le Mans Series, has been won by G-Drive.

United Ausports then banked third and fourth, while Australian James Allen came home in 10th place in the DragonSpeed entry he shares with Henrick Hedman and Renger van der Zande. 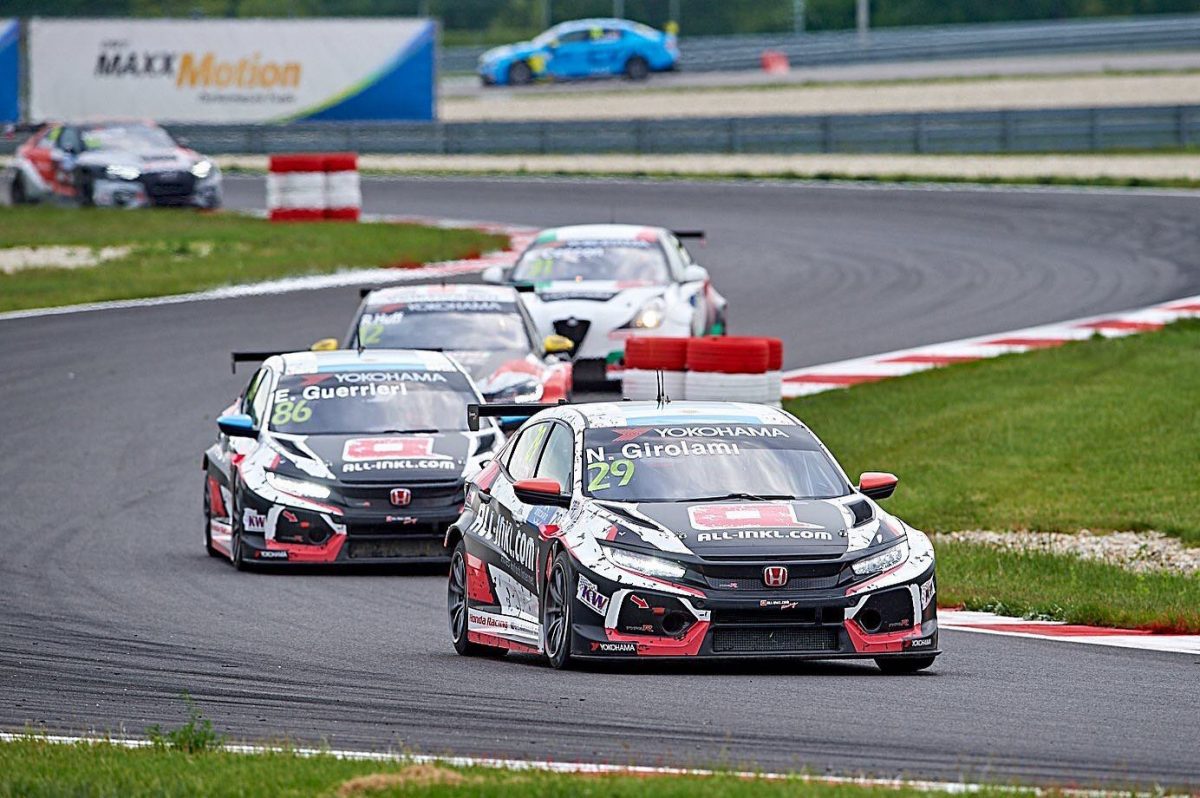 Frederic Vervisch, Nestor Girolami, and Ma Qinghua each picked up a race win in the third event of WTCR at the Slovakia Ring.

Vervisch launched from ninth on the grid to second position on Lap 1 of Race 1 before passing Ma on Lap 5 to achieve a first win of the season for the Audi RS 3.

Ma (Alfa Romeo) held off Norbert Michelisz to pick up a maiden win in the final race of the weekend.

Despite only scoring points in Race 2, Girolami holds a two-point championship lead over Guerrieri ahead of the Zandvoort weekend on May 17-19.

Next Story HOTSHOTS: The weekend in pictures