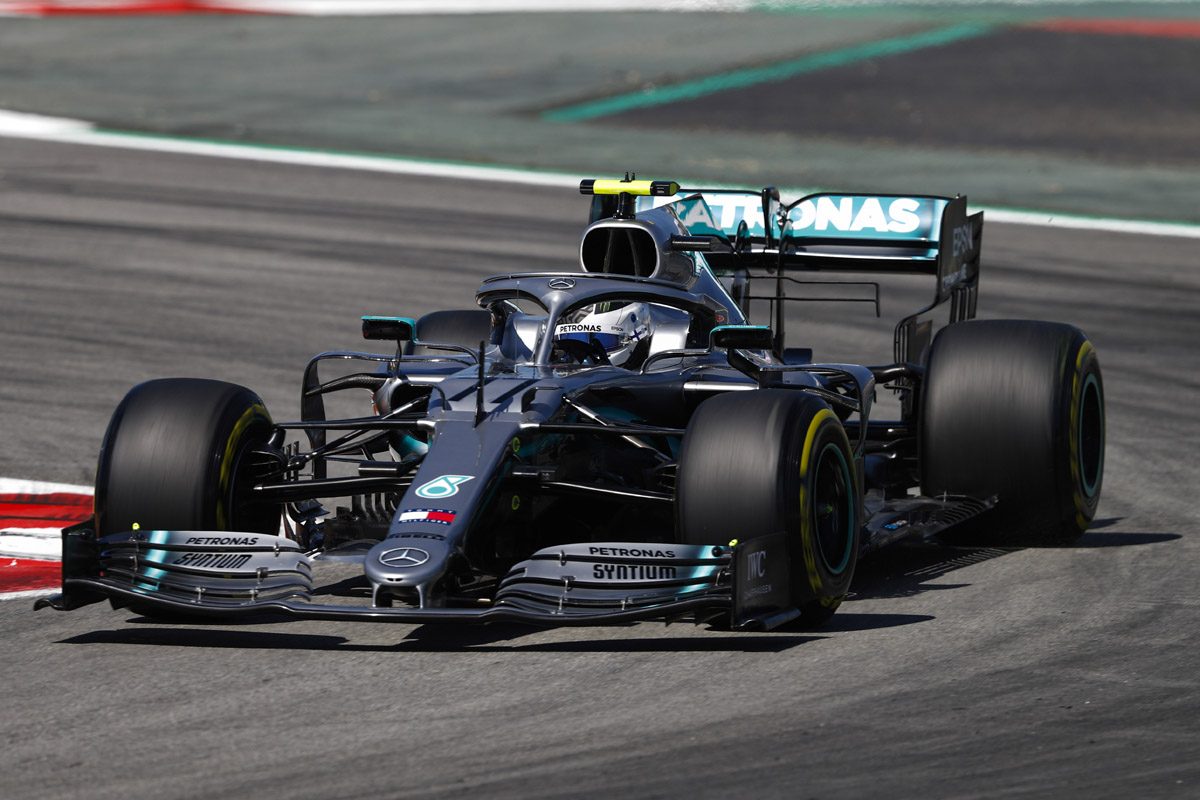 Valtteri Bottas has recorded his third successive Formula 1 pole position after setting a time more than half a second faster than Lewis Hamilton in qualifying for the Spanish Grand Prix.

The championship leader topped Qualifying 2 before a scintillating lap laid booked his place at the front of the grid ahead of his team-mate in Qualifying 3.

It was a dominant performance from Bottas who, like the rest of the field, was unable to improve on his initial effort in the closing moments of the session.

The nearest non-Mercedes entry was almost a full second behind the pole man, Sebastian Vettel’s Ferrari third quickest and only narrowly ahead of Max Verstappen’s fourth placed Red Bull.

Daniel Ricciardo banked the 10th fastest time of the session, a whopping 2.7 seconds off the pace, though will line up 13th after his grid penalty from Baku.

An off for Nico Hulkenberg saw the Renault nose into the barriers during the opening minutes of Qualifying 1, though the German was able to clamber out of the gravel and drag his Renault back to the garage.

The incident was triggered by a lock up under braking at Turn 4, leaving him to skate off the road, damaging the front wing in the process..

He was able to carry on in the session, finally setting a timed lap with two minutes left on the clock, the time good enough for 15th best but ultimately saw him fall into the cut off zone as the session ended.

Joining him on the sidelines was Lance Stroll (Racing Point), Antonio Giovinazzi (Alfa Romeo), and the Williams duo of George Russell and Robert Kubica.

Ricciardo escaped the cut in 15th, the last of the drivers to progress through to the second part of the qualifying hour.

In the early stages of Qualifying 2, Hamilton set the benchmark at a 1:16.038s, two tenths up on his Mercedes team-mate and six tenths clear of Vettel.

A mistake from Charles Leclerc on his flying lap saw him run wide at Turn 9, damaging the underside of his Ferrari over the kerbs as he recorded just the seventh fastest time – almost 1.5 seconds slower than Hamilton’s mark.

That too would fall, with Bottas dropping into the 1:15s bracket to top the session as the chequered flag fell.

A late lap from Ricciardo saw him climb to eighth before being shuffled back to 10th and the final transfer spot into Qualifying 3.

He was just half a tenth faster than Lando Norris (McLaren), who exited the session along with Alex Albon (Toro Rosso), Carlos Sainz (McLaren), Kimi Raikkonen (Alfa Romeo), and Sergio Perez (Racing Point).

As Qualifying 3 began, Bottas recorded a 1:15.406s to shoot to the top of the timing screens by more than six tenths from Hamilton, and nearly nine tenths clear of Vettel in third.

Ricciardo’s initial effort was 2.7 seconds away from the provisional pole time, the Australian facing a three-place penalty after reversing into Daniil Kvyat in Baku.

Having used a second set of tyres following his mistake in Qualifying 2, Leclerc emerged from the pits with only five minutes to run in the session.

It left him the only car on track, though still lost half a second through the first two thirds of the lap, crossing the line with only the fifth fastest time behind Verstappen, 1.2 seconds away from Bottas.

The Spanish Grand Prix begins at 2310 AEST on Sunday.