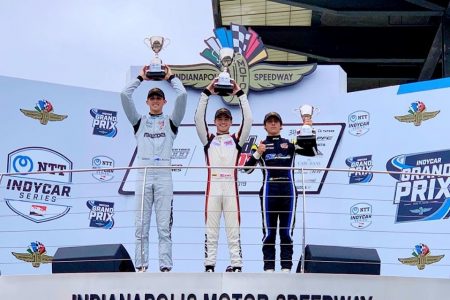 Hunter McElrea has missed out on a maiden USF2000 race win by less than three tenths of a second on the Indianapolis road course.

The Kiwi gained a position off the start to sit behind pole-sitter Braden Eves while a multi-car prang allowed the top two to break clear of the field exiting the first corner.

McElrea squeezed through a gap at Turn 1 to move into first position on Lap 8 before Eves regained the spot on Lap 13.

The 15th and final lap saw McElrea again take the lead but Eves got a better run off Turn 7 and managed to wrest it back in the final corners.

The official margin between the #8 Cape Motorsports car and the #22 Pabst Racing car at the chequered flag was 0.29982.

“To be on the podium at a place as legendary as Indianapolis means a lot,” said McElrea, the 2018 Australian Formula Ford series winner.

“It was a good race but the last two laps were pretty hectic.

“I got past Braden for the lead and held it pretty comfortably until I made a mistake and he was able to get back by. I was able to get him on the outside in Turn 1 but gave him too much room in the Esses on the last lap.

“I hated to lose the lead on the last lap, but it’s good points so I can’t be too disappointed.

“But to drive my hardest and do 90 percent of the work and to lose it on the last lap like that is seriously crushing.

“I’m happy to be on the podium though. Mazda has given me the opportunity to be on the grid and Pabst Racing gave me a really fast car so tomorrow we’ll come back strong.”

Australian Cameron Shields (Newman Wachs Racing) started 13th but emerged in fifth position amid the opening lap melee finished in the same spot, having run as high as fourth.

Eves’ three from three start to 2019 sees him hold a 22-point series lead over McElrea, with another race coming up on Saturday (local time) at Indianapolis Motor Speedway.