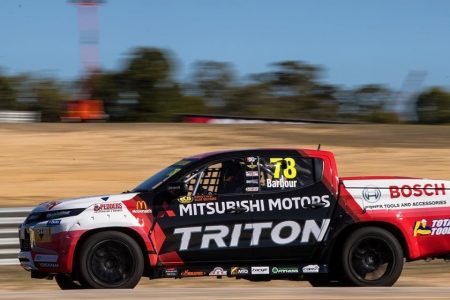 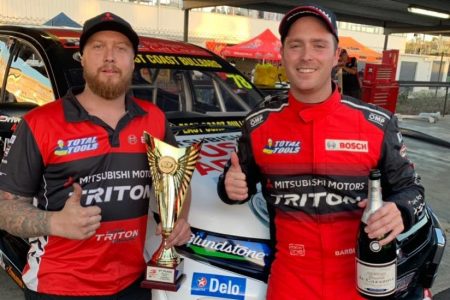 Barbour missed the Barbagallo round win on a countback

Title contender Elliot Barbour will miss the next round of the ECB SuperUtes Series after driving with a broken ankle last weekend at the Pirtek Perth SuperNight.

Barbour revealed the ailment during the second round of the season at Barbagallo Wanneroo Raceway, although the exact nature of the injury had not been diagnosed at the time.

It also caused no obvious hindrance as the 28-year-old finished second in each of the three races, including the thrilling reverse grid affair on Saturday afternoon, and in fact missed out on the round win only on a countback.

He had also picked up two third placings in Adelaide after finishing eighth in the first race of 2019, for which the grid was the reversal of qualifying results as per a now abandoned format.

Barbour is currently second in the series, at only eight points behind Tom Alexander, but will not be able to race his factory-supported Mitsubishi Triton at Winton later this month due to surgery.

“Fresh back from what was a fantastic weekend in Perth,” began Barbour in a video posted on Team Triton Racing Instagram page.

“As some of you may know, I was driving with what was a suspected fractured ankle.

“I went to the specialist Monday and unfortunately it’s broken, it’s broken pretty bad, so I’m going to be heading in for surgery which means unfortunately I won’t be driving the #78 at Winton.

“We’re going to have Cameron (Crick) there, we’re going to have Toby (Price) there, they’ll both be doing a fantastic job for the team, absolutely no doubt about that, but obviously this is a bit of a speedhump for our championship.

“We’re second in the points at the moment and we’re feeling really strong, the car’s getting better and better, but I will be back in the car at Townsville, bigger, faster, and stronger.”

That meeting will be Price’s first of the season after the Dakar Rally winner had to skip the Adelaide round as a result of surgery on his fractured wrist, which was aggravated during his brave ride to a second victory in the rally raid.

Round 3 of SuperUtes supports the Truck Assist Winton SuperSprint on May 24-26, while Barbour’s target is to return when Round 4 takes place in Townsville in early July.