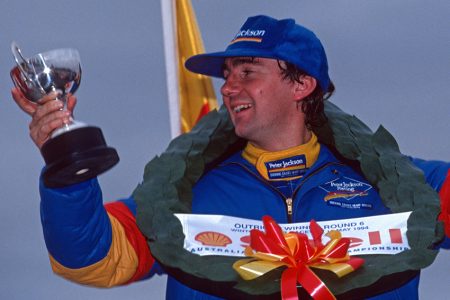 The ‘Glenn Seton Trophy’ will be awarded to the winner of the pre-Project Blueprint V8 Supercars class in the inaugural Kumho Tyre V8 Sleuth Touring Car Classic.

The Classic is a one-off round for older V8 Supercars, Future Tourers, and Super Tourers, to be held at Winton’s Shannons Nationals Meeting in August.

Seton twice won the Australian Touring Car Championship, as on owner-driver, during the era, in 1993 and the first year as the V8 Supercars Championship in 1997.

“I’m extremely honoured to have a trophy like this named in my honour,” said Seton.

“There are a lot of fans that have great memories of that 1990s period of racing and I absolutely do as well. It was a great period of the sport with a lot of growth and exciting advancements.

“Those two championship wins in the 1990s are right up there as the most satisfying achievements of my entire racing career.

“To have my contribution to that era of racing honoured with a trophy is humbling and very special.”

Those titles came in EB and EL Falcons, which are eligible in the pre-Project Blueprint class along with the EF and AU.

On the Holden side, VP, VR, VT, and VX Commodores fall into the class.

The BA, BF, VY, and VZ are also eligible for the event, with Rick Kelly’s 2006 championship winner to be raced by its current owner and former Super2 driver, Ben Eggleston.

The event will be held on August 31-September 1.