When the chequered flag dropped on the first Pirtek Perth SuperNight, it was a proud moment for Pirtek CEO Stephen Dutton.

After dipping a toe into motorsport sponsorship with Stone Brothers Racing (SBR) in 1998, Pirtek is now one of the biggest players in Supercars with naming rights of the Enduro Cup and annual pit stop competition, as a major partner at DJR Team Penske, as official hose supplier of the series, and now as the naming rights partner of the successful Perth SuperNight event.

For transparency, Pirtek has also been a Platinum Partner of Speedcafe.com since its inception in 2009.

Pirtek is the world’s leading supplier of premium fluid transfer solutions; think hoses and fittings for any application where fluid needs to be moved from one place to another.

While Pirtek supplies product lines to virtually every sector including medical, hospitality, automotive, transport, marine, forestry, power, defence, and engineering, it is the oil, gas, and mining industries which have tied the company to Western Australia for so long.

Pirtek was established by Peter Duncan in Sydney in 1980 and remains a family-owned operation having expanded to 23 countries with more than 400 Service and Supply Centres and 1750 mobile service units servicing more than 200,000 customers with more than 13,000 product lines.

There are currently 96 franchises in Australia with 11 of those in WA covering some of the most remote regions on the planet.

The support of the Perth race backs up their commitment to Supercars’ annual Pirtek Enduro Cup and their team commitment with DJR Team Penske’s Shell V-Power Racing Team.

SPEEDCAFE.COM: Why did you decide that the Perth SuperNight was something that Pirtek wanted to be involved in?

STEPHEN DUTTON: Western Australia has always been an important market for Pirtek and when the opportunity presented itself to be the naming rights sponsor of one of the State’s biggest events it was a perfect fit for us.

We have ridden all the highs and lows that the mining sector delivers and we have been loyal to this part of the world, as it has been to us.

We have business relationships and friendships in Western Australian that extend more than three decades and there are not a lot of companies can say that.

I think Red Rooster might have been given first right of refusal after the night race in Sydney last year. When they knocked it back, we looked at all the elements and it made sense.

SPEEDCAFE.COM: What were those elements that encouraged you to take up naming rights? Is the deal for two years?

DUTTON: Yes, we have a deal in place for two years with a couple of years option.

While the branding is nice for the TV coverage, our support of the first night race in Perth has provided a host of customer and fan-based opportunities, which is now the most important thing for us because we are not an everyday retail brand.

One of the biggest activations on the ground in Perth was the enhancement of Pirtek’s national recruitment drive for service technicians. Fans had the chance to register their interest in joining the industry and go into the draw to win a trip to the US to visit the Penske Racing organisation’s headquarters in North Carolina.

Our continued growth currently sees the Pirtek website currently having 40 vacancies in its careers section and 31 of those are for mobile service technicians across Australia including five outlets in WA.

We like to think we provide one of the best opportunities through our extensive training programs, but we really needed to let people know what we have on offer.

While everyone who registers for the competition might not be the perfect fit to become a Pirtek mobile service technician, the activation allows us to bring attention to what is a serious and rewarding career path. 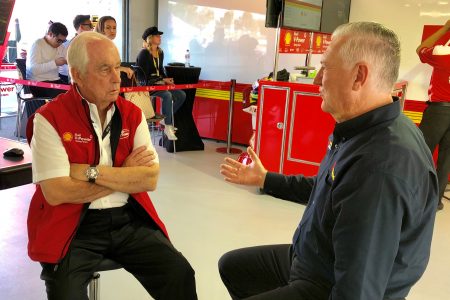 SPEEDCAFE.COM: The prize to the Penske headquarters has obviously come through your relationship with DJRTP.

DUTTON: Yes, the trip to the Penske headquarters is another positive by-product of our successful relationship with Roger (Penske) and his organisation which has been the best partnership of its type that we have had the pleasure of being involved in.

SPEEDCAFE.COM: Tell us a bit more about how your return to ‘team land’ happened with DJRTP.

DUTTON: We were approached to become a minor sponsor with the team when the team was announced at the end of 2014 and with Marcos (Ambrose) as part of the program it all had a bit of synergy.

That partnership has grown to where we are now a major partner behind Shell and have the premier windscreen banner signage on both cars.

Roger is the most successful operator in world motorsports history and his operation is simply first class and has delivered everything and more to us off track.

On track, we knew it would not take long for the team to be competitive and to win the championship last year with Scott (McLaughlin) was a fantastic achievement.

SPEEDCAFE.COM: Obviously Marcos won you a couple of Supercars Championships with SBR in 2003 and 2004 and was one of the driving forces for you getting on board the new team. Was it disruptive when he decided to step aside from full-time driving after only a couple of races?

DUTTON: We have always had a great relationship with Marcos and certainly he was one of the reasons we did the deal with DJRTP.

It was disappointing when he moved aside from full-time driving, but we respected his decision.

By that time, we had started to experience the ‘Penske Way’ and knew it was an organisation that was a natural fit for how we like to go about business.

We were obviously also well aware of Roger and Dick’s (Johnson) on-track record and were confident that what we were already achieving off track in a business sense would be matched by on-track performance.

SPEEDCAFE.COM: Speaking of performance, as a major sponsor how do look at all these Supercar parity issues which have directly involved the DJRTP organisation?

DUTTON: At the end of the day it has nothing to do with us.

It is up to the team to deal with it and we have every confidence in every member of the team from the owners to the person sweeping the floors. 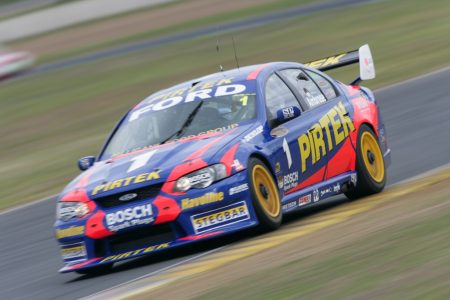 SPEEDCAFE.COM: Pirtek have built their brand nationally and internationally through a range of successful sporting sponsorships ranging from local baseball in the early 1980s to naming rights sponsorship of the Parramatta Eels and New Zealand’s national team in rugby league. Why has motorsport risen to the top in your marketing spend?

DUTTON: One of our earliest tastes of sponsorship success came in 1998 when we sponsored a Stone Brothers Racing Falcon at the Bathurst 1000 driven by Jason Bright and Steve Richards.

The car went on to win the race and that led to an overnight recognition of the Pirtek brand even though we had been in business for 18 years. That success obviously led to a long association with SBR and two championships with Marcos and one with Russell (Ingall, as a co-sponsor).

We also had a relationship with the Holden teams and Rick Kelly and Garth Tander’s championships (2006, 2007, HSV Dealer Team).

We really re-entered the sport with Triple Eight and Casey Stoner’s Development Series campaign and that opened us to what was available in the category and that has led to the Pirtek Enduro Cup and now the Perth SuperNight.

Everything has to make sense. At the end of the day we have to get a return on our investment, at any level of partnership.

SPEEDCAFE.COM: It there also a sense of giving back amongst all this?

DUTTON: The Duncan family is also very philanthropic and do a lot of their charity work in stealth, but one of our major public events is the annual Pirtek Fishing Challenge run by former rally ace Michael Guest, so I guess it also has a motorsport link.

This year we had almost 9,000 anglers and offered $213,000 in prizes, making it the biggest fishing competition of its type in the world.

Activities like these give us a chance to also leverage our relationships and utilise the star power of athletes like Scott (McLaughlin) and Fabian (Coulthard) to bring attention to the causes.

Overall the fishing challenge raised more than $100,000 for charity this year, including the Prostate Cancer Foundation and that is something everyone at Pirtek is proud of.

SPEEDCAFE.COM: Pirtek has continued to expand its international operations, especially in the US where the Duncan family bought back their US operations in 2015. It has been interesting to watch you use motorsport sponsorship as a major part of your marketing spend over there.

DUTTON: I guess the big-ticket item in the US was our support of Matt Brabham and Team Murray in the 100th Indianapolis 500, which was enormous.

It was the biggest single-day sporting event ever with a live sell-out crowd in excess of 400,000 people and created the hype Pirtek needed to show it was serious about its reborn US entity.

We have also had major interest in things like competitive snowmobiling which runs in the North in the winter months and where Pirtek products really come into their own.

We have also had a growing interest in NASCAR through our relationship with Penske Corp and Austin Cindric in particular which has all led to some terrific business to business opportunities.

Glenn (Duncan) is now based in the US and has grown the network from 44 to 87 franchises and aims to add a further 100 locations over the next three years.

SPEEDCAFE.COM: So what is next?

DUTTON: We continue to learn with everything we do, but it is important for us to build new relationships especially as our product range continues to develop through different sectors, not just mining and transport.

At the same time, it is vital that we do not forget where we have come from and the sponsorship of one of Western Australia’s biggest events this weekend is certainly a part of that.

While it is working, we will keep doing it.