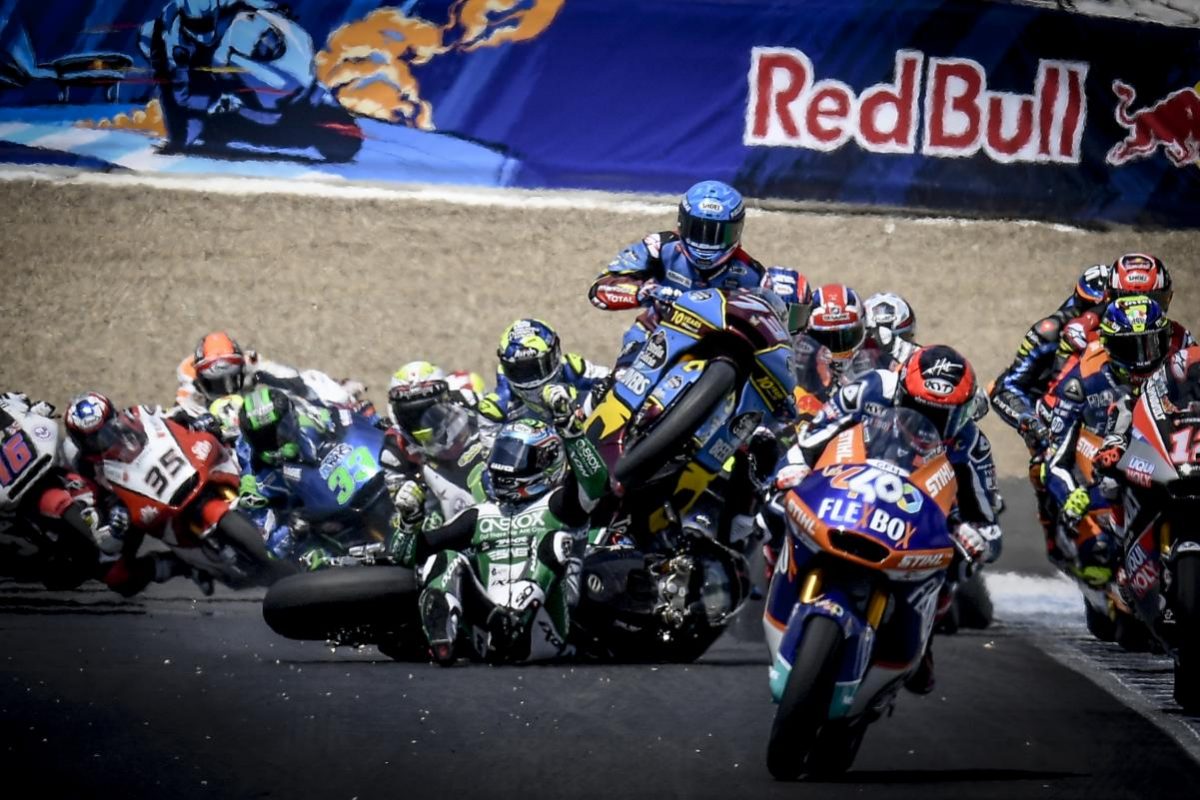 Remy Gardner wanted to take the restart of the Jerez Moto2 race despite being declared unfit to compete after being involved in a frightening pile-up that caused a red flag.

Gardner moved into third position at the first corner but was thrown from his Kalex on exit, kicking off a chain reaction that saw three other riders go down.

Dimas Ekky Pratama initially looked to have fared worst, as it was his own body which slid into Marco Bezzecchi’s bike and took the Italian down after hitting Gardner’s bike.

Gardner, on the other hand, seemed to have had an extremely lucky escape given that Alex Marquez clouted the Australian’s bike, which soaked up the majority of the force before the Spaniard’s machine struck Gardner himself.

After both were taken to the medical centre, however, Pratama was declared fit and Gardner ruled unfit due to concussion.

The 21-year-old’s post-round review reveals that ONEXOX TKKR SAG Racing was actually working to try and fix his #87 bike so that he would be able to take the restart, as Marc VDS successfully did so for Marquez.

“We missed the front row by the smallest margin but I felt really good with the bike, the team and everything that is happening so was really excited for the race,” recalled Gardner.

“After a good warm up I thought we would have a good race.

“I made a decent start and after a bit of elbowing into turn one I slotted into third and then I high-sided and that was the end of what could have been another really good race result.

“I still don’t fully understand why I went down and then they wouldn’t let me restart.”

Gardner, the son of 1987 500cc world champion Wayne, had been enjoying his best season yet in the grand prix arena, having led and ultimately finished on the podium for the first time two races ago in Argentina.

He had also set the fastest lap on combined practice times before being 0.043s away from the front row in qualifying for the Spanish Grand Prix.

While there had initially been fears that Gardner would again be forced onto the sidelines due to injury, he vowed to compete again in Round 5 in a fortnight’s time.

“I am sorry for the team, and all my supporters,” Gardner added.

“The main thing is I am ok, am still fifth in the championship and will be back strong in Le Mans.”

After his third win of the campaign in Spain, Lorenzo Baldassarri takes the Moto2 championship lead to France on May 17-19.