Rookie Quartararo on pole in SRT one-two at Jerez

Rookie Quartararo on pole in SRT one-two at Jerez 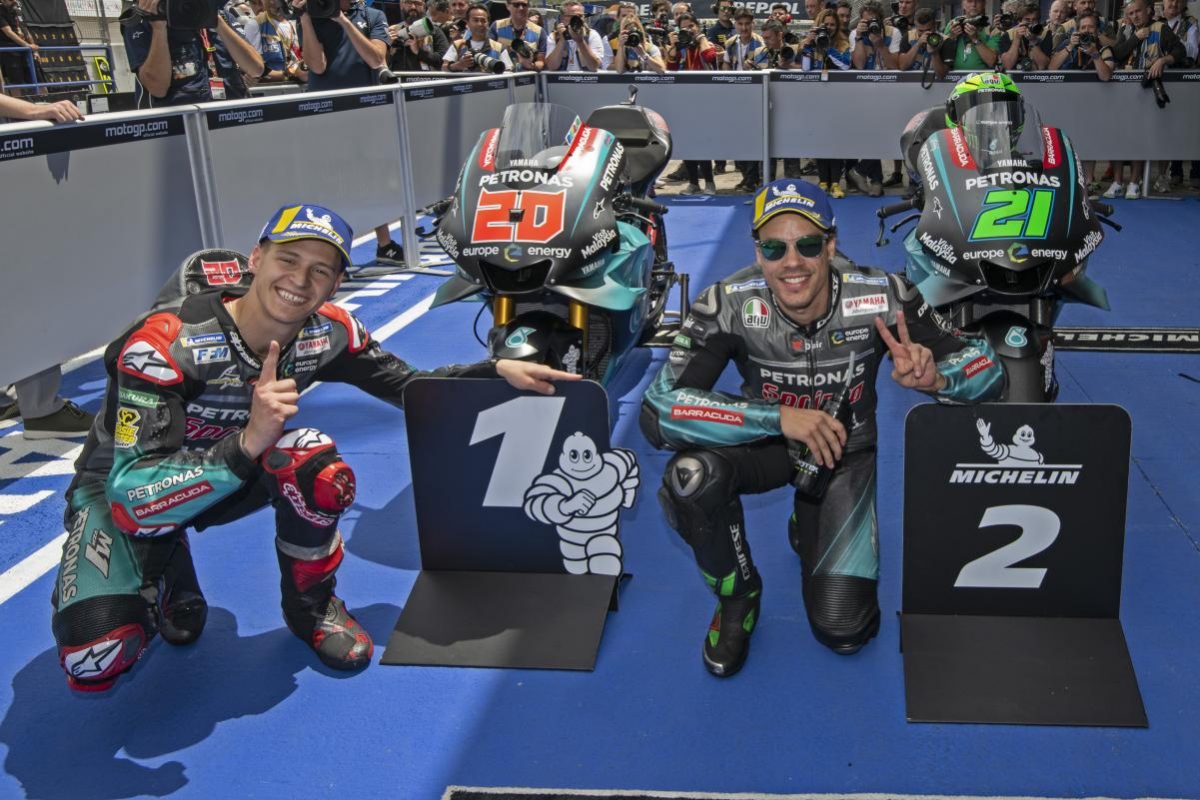 Rookie Fabio Quartararo has qualified on pole for the Spanish MotoGP while Franco Morbidelli made it a one-two ahead of their satellite Yamaha team’s fourth race in the premier class.

Quartararo became the youngest premier class pole-sitter in history with a 1:36.880s at Jerez, and the Petronas SRT duo will be joined on the front row by Repsol Honda’s Marc Marquez.

Valentino Rossi and Jack Miller, however, failed to make Qualifying 2 and will line up 13th and 15th on the grid, respectively.

Marquez laid down a 1:36.970s at the first time of asking in qualifying and while the world champion opted for a two-stop strategy, a slight moment on his second run and a near crash at Turn 7 on his third meant there would be no improvement for #93.

Morbidelli was in fact second-fastest at the end of the first runs by just 0.041s before his 20-year-old French team-mate went to the top at the start of his second run.

As it turned out, Morbidelli had already done enough to qualify on the front row but he went one better in clocking a 1:36.962s in the 15th and final minute of Q2.

Andrea Dovizioso qualified fourth with a 1:37.018s on his Mission Winnow Ducati and will be joined on Row 2 by Maverick Viñales, who came from Qualifying 1 on his Monster Energy Yamaha, and Castrol LCR Honda’s Cal Crutchlow.

Francesco Bagnaia took his GP18 Pramac Ducati to 10th on the grid at 0.504s off the pace, and is set to start alongside Jorge Lorenzo and Joan Mir (Suzuki Ecstar).

Lorenzo dropped his Repsol Honda while ninth during the second runs, while Petrucci went down at Turn 1 near the end of the session.

With Viñales, Rossi (Monster Energy Yamaha), and Miller (Pramac Ducati) all going into Qualifying 1, at least one of the usual suspects would fail to make the second stanza.

As it turned out, the latter two both missed out when Rossi was pipped from second by Bagnaia while Miller crashed at Turn 2 as he tried to lift himself back above the cut.

Andrea Iannone (Gresini Aprilia) did not partake in qualifying after a nasty crash in Free Practice 4 and will have further medical checks on race day.

Race start for the 25-lap MotoGP race is scheduled for Sunday night at 2200 AEST.