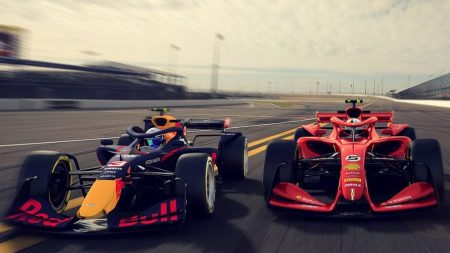 A concept drawing of what F1 could look like in 2021 pic: Formula 1

Formula 1’s 2021 regulations are set to be confirmed in October after teams agreed to delay their release in an effort to level the playing field.

Regulations state a swathe of rule changes must be confirmed by June, however with unanimous agreement that date can change.

Concerns within the paddock went that releasing the regulations in June would afford the larger teams a significant technical advantage, as their greater resources would allow them to begin work sooner.

A December date was suggested instead, giving all teams a little over 12 months to develop their 2021 cars, though that did not receive the unanimous acceptance it needed.

Instead, Red Bull boss Christian Horner has stated that an October release is now likely as the big and small teams compromise.

“If you look at it, probably the best time to put it would be December,” Horner said.

“But then the little teams would argue that they can’t react to that because the earlier they are, the bigger teams have more resources to split their resources and effectively put more resource on it sooner than a little team.

“October is effectively a compromise between end of year and June, so we’re okay with that.”

While Mercedes has agreed to the October compromise, team boss Toto Wolff has admitted that he was on the fence over the concession.

Mercedes has been the class of the field since the current hybrid regulations came into play in 2014, having won every drivers’ and contructors’ title since.

“The trick is, in order to come out with good regulations, you need enough time. That is a fact. But also you need to describe very, very precisely what’s being pushed out.

“It needs a unanimous decision of all teams. We are not going to be the ones that make that fail.”

Regulation changes for 2021 are expected to be dramatic, with more aggressive looking cars designed to encourage closer racing on track.

F1 presented its initial concept late last year, while teams received additional information in the week prior to the Bahrain Grand Prix in late March.