McLaughlin comes from behind to win Race 12 in Perth

McLaughlin comes from behind to win Race 12 in Perth 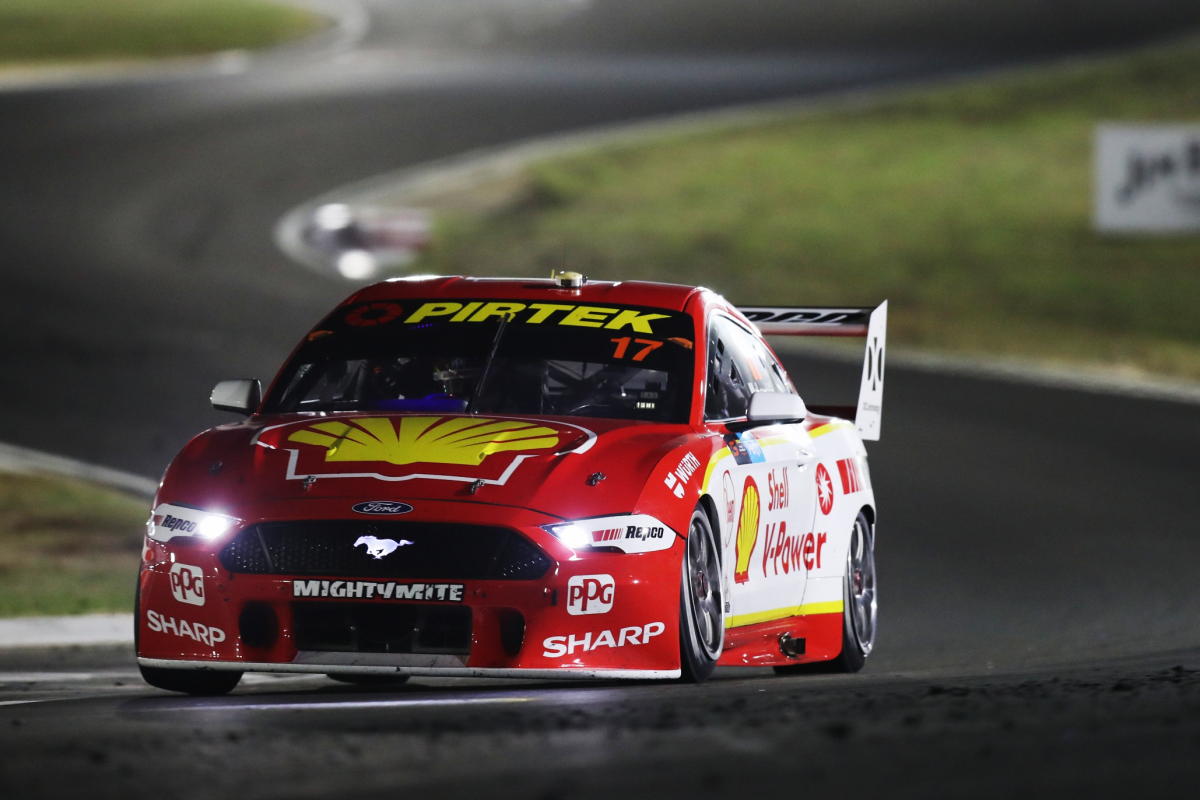 Scott McLaughlin has recovered from another suboptimal start to win Race 12 of the Supercars Championship at the Pirtek Perth SuperNight.

Despite the initial setback and a mid-race Safety Car, the Shell V-Power Racing Team driver was a fairly comfortable front-runner once he cleared early leader Jamie Whincup during the first compulsory pit stop cycle.

The Red Bull Holden Racing Team’s Whincup ultimately finished second to McLaughlin, just as they had qualified, while Cameron Waters completed the podium in the #6 Monster Energy Mustang.

Race 11 winner Fabian Coulthard got close to the Tickford entry with about 15 laps remaining but didn’t quite threaten, remaining in fourth position in the second of the DJR Team Penske Mustangs.

Shane van Gisbergen (#97 Triple Eight ZB Commodore) was fifth despite a pit lane stack and a hair-raising restart incident, while the Penrite Racing entries of David Reynolds and Anton De Pasquale were sixth and seventh respectively.

Whincup walked the #88 ZB Commodore away well from the outside of the front row and was able to move across and cover McLaughlin’s #17 Mustang into the first corner.

Waters similarly bettered team-mate Chaz Mostert from the outside of the second row when the lights went out, but a touch between the pair saw Mostert emerge from Turn 1 in third position and Waters had to tuck in behind.

Andre Heimgartner (#7 Plus Fitness Altima) gained a position on fellow third row starter Coulthard, while van Gisbergen sat behind them in seventh.

Waters, Heimgartner, and Coulthard ran together for the first handful of laps before the former made some margin, while McLaughlin remained right behind Whincup at the head of the field.

Coulthard peeled into pit lane at the end of Lap 12 having still not managed to find a way past Heimgartner and rejoined just ahead of De Pasquale, who had taken his first CPS a lap earlier from an effective 11th.

Mostert let Waters past as they dropped down the back straight on Lap 16 due to a mechanical problem becoming apparent in the #55 Supercheap Auto Mustang, while Whincup managed to make a couple more tenths of margin over McLaughlin.

The championship leader pitted anyway on Lap 17 and was able to take new tyres on the working side of the #17 Mustang having saved rubber during Armor All Qualifying.

He was also able to rejoin about 1.4s up on Coulthard despite taking on a reported 51 litres of fuel versus 42, out of the compulsory 120-litre total fill.

Van Gisbergen, meanwhile, fired the #97 ZB Commodore down the inside of Heimgartner for what quickly became a nominal fourth position at Turn 7 on Lap 17.

Whincup finally pitted for the first time after 25 laps and split the DJR Team Penske entries when he rejoined in ninth position at the time, about 5.5s behind McLaughlin and just ahead of Coulthard, but having had a fill of about nine litres more than McLaughlin.

Waters and van Gisbergen were among the last through the lane in the opening cycle at the end of Lap 27.

When the cycle did shake out a couple of laps later, McLaughlin led Whincup, Coulthard, Heimgartner, De Pasquale, Scott Pye (#2 Mobil 1 Mega ZB Commodore), Waters, and van Gisbergen, while Mostert’s Mustang sat in the garage after hopes of a quick fix to its engine problems faded.

Another Tickford entry was on the ascendancy, however, as Waters passed Pye and De Pasquale at Turn 1 in consecutive laps to move into fifth position in Lap 34, having ceded some ground in the pits due to a 62-litre fill at his first stop.

McLaughlin moved his lead beyond the six-second mark on Lap 35, at which time Whincup had put around four seconds between himself and the #12 Mustang of Coulthard.

Waters’ progress continued when he lunged past Heimgartner for fourth on Lap 37, before van Gisbergen passed the lead Nissan Turn 7 on Lap 39 having not long got by De Pasquale and Pye.

Coulthard pitted from third and Reynolds followed him in at the end of Lap 47, with the former having new tyres to put on the working side of Car #12.

A Safety Car was called on Lap 50 to retrieve Pye’s stricken ZB after he had made heavy contact with the rear of Heimgartner’s Altima at Turn 7 which damaged the steering on Car #2.

It also prompted those who hadn’t to complete their second CPS and McLaughlin led Whincup, Waters, Coulthard, Rick Kelly (#15 Castrol Altima), and van Gisbergen, who lost a few seconds stacking behind #88, under Safety Car.

Reynolds, De Pasquale, Mark Winterbottom (#18 Irwin ZB Commodore), and Will Davison (#23 Milwaukee Mustang) rounded out the top 10, while Heimgartner drove into the garage for the Kelly Racing crew to work on his car.

The Lap 55 restart triggered further drama when Kelly’s Altima went across the nose of van Gisbergen’s ZB as they accelerated on the main straight.

Kelly fired onto the grass and while he kept away from the pit wall, the polystyrene Pirtek sign that he hit became unwanted blanking in his air dam.

He got roughed up some more in the angry pack before another wild moment, when #15 and James Courtney’s #22 WAU ZB Commodore touched on the run to Kolb Corner, saw some debris fall out of Kelly’s car.

However, he still needed to pit to get rid of the rest.

Stewards opted to take no further action over both the Pye-Heimgartner and Kelly-van Gisbergen incidents and the 2016 champion pressed on in fifth position.

McLaughlin also pressed on, going a second clear of Whincup on Lap 58 and two seconds during Lap 63, as Waters tailed Car #88.

Whincup, however, found some breathing space and while Coulthard would come to lurk behind Waters, he didn’t get close enough to seriously think about a pass.

The front of the field was in fact unchanged after the restart, but for Kelly’s moment with van Gisbergen, and McLaughlin’s advantage at the chequered flag was 1.9283s.

“First night win, hope the fans enjoyed it here in Perth. Such an awesome spectacle.

“Shell V-Power Racing gave us an awesome car, best way to respond. So stoked, Fabian’s win yesterday and a win for me today.

“I made another balls up (at the start) there, so I’ve got to look at it. The start was good, the light was so much faster today — I’ve got to work on myself.

“Credit to the guys next to us as well (Car #88), they pushed us hard all race and had an awesome battle. Stoked to get a night win and have a bit of fun.”

Davison put a textbook move on a fading Winterbottom at Kolb Corner on Lap 74 to earn eighth position, while Lee Holdsworth (#5 The Bottle-O Mustang) and Nick Percat (#8 Holden Guaranteed Value ZB Commodore) rounded out the top 10.

Tim Slade made it consecutive Brad Jones Racing entries with 11th in the #14 Freightliner ZB Commodore while Simona de Silvestro matched her season-best from the night before with 12th in the #78 Harvey Norman Altima.

Heimgartner was one of three to finish off the lead lap, two down in 23rd, while Pye and Mostert were the two DNFs

McLaughlin’s advantage over Coulthard at the top of the standings is now out to 142 points, while van Gisbergen is third and Whincup 409 points back from the leader in sixth.

The next event of the Virgin Australia Supercars Championship is the Truck Assist Winton SuperSprint on May 24-26.